The Astronaut Memorial Planetarium and Observatory is located at Eastern Florida State College on the Cocoa Campus. With one of the largest public telescopes in the state, it is recognized as one of the best planetariums in the country. It seeks to provide the students and the general public with fun, informational, and educational experiences. The building includes a theater, science exhibits, an art gallery, and gift shop. Exhibits include a 235-pound swinging pendulum that shows the rotation of the earth, a planet wall where visitors can see how much they would weigh on other planets, and a Van de Graaf electrical static machine that makes hair stand up. The theater has two screens, one for planetarium and laser shows, and the other for film showings.

The planetarium and observatory feature one of the largest telescopes in the state and several other attractions. 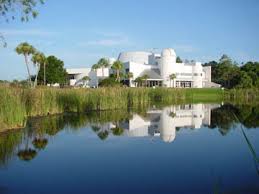