In the age of segregation, Jones High School operated at this location between the years of 1921 and 1950, when the school for Orlando's African American students moved to South Rio Grande Avenue. The first school for Black students in Orlando was formed in the 1870s. Prior to that time, African American parents worked together to hire teachers who offered courses in homes and area churches. Schools throughout Orange County remained segregated after the 1954 Supreme Court decision that forbade such practices. A federal court order in 1972 effectively ended the practice of deliberately maintaining separate schools, but many children in Orlando continue to attend schools where a majority of children are from one race due to residential segregation and the proliferation of private schools.

Jones High School operated at this location between 1921 and 1950, when a new school was constructed and this building became an elementary school. 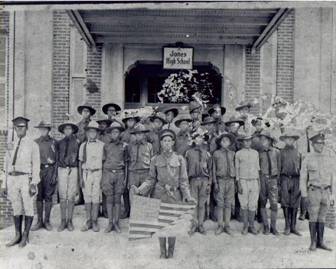 The first new school building for Black students in Orlando opened in 1886 and became known as the Johnson Academy when its courses expanded to include classes for high school students. This school stood at the corner of Garland and Church Street. The school moved to this location in 1921 and became known as "Jones High School in honor of its principal who also donated this land. In 1952, the school moved again west of downtown to its current location on Rio Grande Avenue. In the early 2000s, the school then went through renovations to modernize the school.