This historic house was once the residence of Doctor Philip Phillips (1874-1959), Florida's first orange juice baron. The home was built in 1893 by Colonel Peleg Peckham, a promoter of the nearby Winter Park, as a wedding present for his daughter. The house is a well-preserved example of Shingle Style architecture and the only such structure remaining in Orlando. Dr. Phillips purchased the property in 1912 and lived here until his death in 1959. He made his fortune in the citrus fields, selling fresh orange juice locally before producing and popularizing frozen juice that could be shipped well beyond Florida. The house was added to the National Register of Historic Places in 1979, a few years after the family deeded the house to the City of Orlando. The property is now operated as a bed and breakfast.

The former Dr. Phillips House, now the Orlando Historic Inn, was built in 1893. 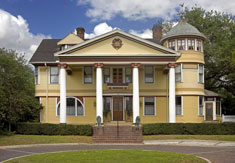 The Dr. Phillips house was constructed in 1893 at the request of Colonel Peleg Peckham. Peckham, a promoter of the nearby Winter Park, had the house built as a wedding gift for his daughter Miriam Peckham and her husband Archibald R. McCallum. The 2 ½-story Shingle Style home was designed by L. M. Boykin and cost $37,500. At some point in the early 1900s the McCallums died and the house was sold to a C. E. Grahams. In 1912 Dr. Philip Phillips purchased the property. Shortly afterwards he commissioned Philadelphia architect L. Percival Hutton make renovations to the house, which included replacing the two-story porch with an Ionic portico. Later additions included a dance hall and several bathrooms.

Dr. Philip Phillips (1874-1959) was a well-known resident of Central Florida and a major citrus baron. Born in Tennessee, Phillips graduated with a medical degree from Columbia University before moving to Florida to try his hand as a businessman. After some initial failures, Phillips began acquiring orange groves, which became highly successful. He introduced many innovations to the citrus industry, most notably “flash” pasteurization, which improved the taste of orange juice. Phillip’s businesses enterprises grew to the point where he became the largest orange grower in the world, selling over 100 million oranges annually from land holdings in nine countries. Dr. Phillips was also very charitable; he was a patron of the arts, provided benefits for his employees, built a hospital, and founded the Dr. Phillips Association charity.

Dr. Phillips passed away in 1959, and in 1974 his family deeded the Phillips house to the City of Orlando. In 1979 it was added to the National Register of Historic Places. The house was used for community events such as the Orlando Opera Guild’s Designer’s Show House, but it began falling into disrepair. Eventually it was acquired by the Courtyard at Lake Lucerne, a complex of historic homes refurbished into bed and breakfasts. The Courtyard restored the house and added modern amenities as well, earning the George L. Stuart Jr. award for historic preservation in the process. Today the Dr. P. Phillips House operates as the Orlando Historic Inn, a bed and breakfast that is available for overnight stays, meetings, parties, and weddings.