This one-room schoolhouse was an important community site and center in the country from its creation some time between 1890-1895 through 1937 when it fell out of use. The original adobe was constructed in 1856, but was later made into a wood structure in the 1890s. 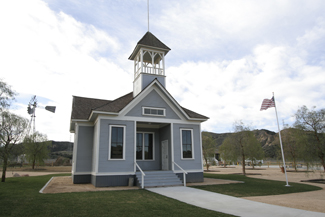 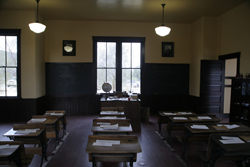 The 1890s structure was built in order to replace an adobe structure. The wooden frame was built by Vander Venter, and the structure was likely constructed with the assistance of local farmers. The original building had no bathroom, plumbing, or electricity. The schoolhouse was heated by a wood burning stove.

The schoolhouse itself if a typical, late 19th century one-room schoolhouse. It has chalkboards on three walls, a bell tower (with no bell), and his and her entries. A nearby well supplied water, and, later, a windmill and another well pumped water into an adjacent tank.

When the wooden structure was first constructed, there were twelve boys and five girls enrolled. The school could accommodate approximately 20 students from the nearby area. School was held 8 months out of the year, and students were taught by a male teacher who had a grammar grade certificate.

In 1918, mature pepper trees were planted in the lot, and flank the schoolhouse. Restrooms were constructed in 1923, in 1925, a drinking fountain was built, and electricity was brought to the schoolhouse in 1934.

According to its application to the register of historic places, "The San Timoteo Canyon Schoolhouse is significant at the local level... for the important role the school building played in the rural agricultural area of San Timoteo Canyon during the years ca. 1895-1937..."1

The San Timoteo Canyon Schoolhouse is one of nine one-room schools in California currently listed in the National Register.