Haili Church is the largest surviving wood-framed church built during the missionary period in Hawaii. It was built in 1854 on a stone foundation. The architecture is Greek Revival, a style brought over by the United Church of Christ missionaries that established the mission here in 1824. The first church was simple grass hut. The present building was listed on that National Register of Historic Places in 2002. Initially called the Waiākea Mission Station, it was the first Christian mission on the eastern side of the Island of Hawaiʻi. It has also been known as the Hilo Station. The church continues to be serve as a lively place for the congregation to worship and socialize. Indeed, some families have had members in its choir for four or five generations. 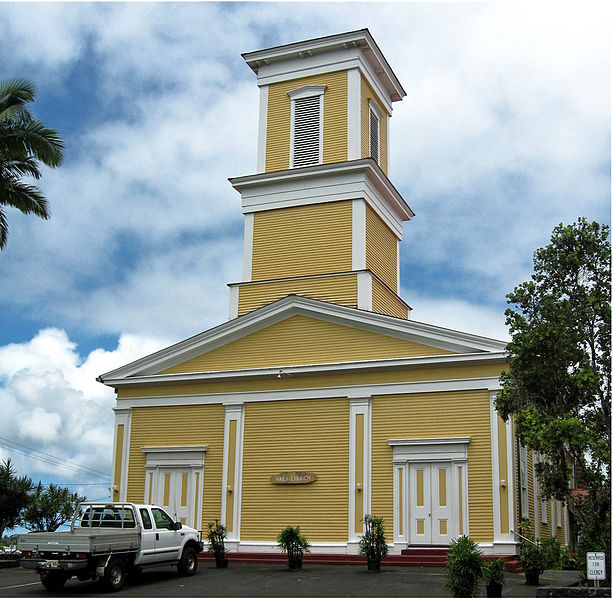 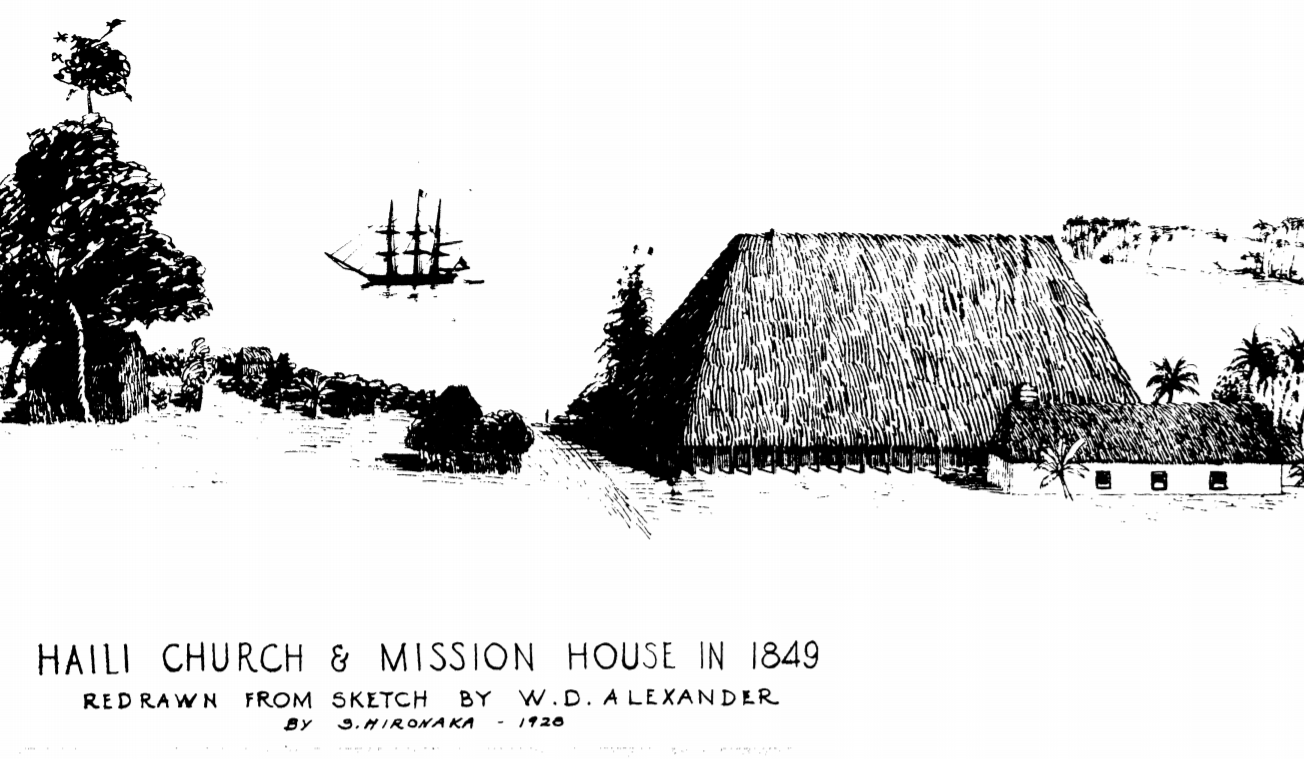 American missionaries first came to the Hawaiian Islands in 1820. Three missionaries — Asa Thurston, Artemis Bishop, Joseph Goodrich, and William Ellis — surveyed Hawaii in 1823 to find possible locations for missions. Hilo, which was named Waiākea at the time, was one of them. The first two posts were Mokuaikaua Church in the Kona District on the western coast and this one on the east side. On May 19, 1824, a simple grass hut was dedicated as the first church of the American Board of Commissioners for Foreign Missions. Joseph Goodrich was the preacher and Samuel Ruggles was the teacher.

In December 1824, Goodrich met Chiefess Kapiʻolani at the Kīlauea volcano. Goodrich wanted to dramatically demonstrate that the new faith was acceptable. In June 1825, the HMS Blonde arrived, and Goodrich guided a party to the summit of Mauna Kea. A larger grass structure was built in 1825 in the area of present-day Kalakaua Park. Goodrich brought some coffee trees not long after that. Samuel Ruggles brought some coffee to the other side of the island — the first Kona coffee — in 1828 when he was transferred to the Kealakekua Church.

Over the next few years, the boarding school, a larger thatched church, and other buildings were built in that area. That area is now the town square surrounded by civic buildings such as the historic District Courthouse and Police Station and Hilo Federal Building. In 1835, Rev. Titus Coan and his wife Fidelia arrived. He learned the Hawaiian language, so he could travel through the districts of Puna and Kaʻū to the south and evangelize more of the natives.

Years of growth and evangelization increased the size of the congregation to about 7,000, prompting the construction of the present building. A wood-frame building was built on a stone foundation in 1840. However, a more substantial building was quickly planned, and the fifth and current structure was started in 1854. This structure was dedicated by Rev. Coan on April 8, 1859.

"King's Days" — the custom of two-and-a-half days per week of free service for public projects — was still in practice at the time. So native Hawaiians worked on the church. It was originally to be a stone church, but it was decided during construction to build most of it out of wood. In Coan's words: "When our first framed church building became old and dilapidated, we decided on replacing it with an edifice of stone and mortar. But after a year's hard toil in bringing stones on men's shoulders and after having dug a trench some six feet deep for the foundations without coming to bed-rock, we by amicable agreement dismissed our mason and engaged two carpenters."

The current building was built in a simplified interpretation of the Greek Revival style. It was built in a form of that style that was used extensively for churches and meeting houses in New England from roughly 1800 to 1850. The main interior space has a ceiling 20 feet high spanning 50 feet. The name of the church derived from the forest, Haili Kulamanu (Paradise of the Birds), from which most of the ʻōhiʻa wood was cut. This forest is located some 6-8 miles southwest from the church. The Hawaiians hewed the wood in the forest, then hauled it to the mission with drag ropes.

The flexible wooden building survived an 1868 earthquake that damaged many stone buildings and plaster walls. In 1900, pews made from koa wood were installed. In 1902, Harry K. Naope Sr. founded the Haili Church Choir, which sang a cappella in the Hawaiian language. In 1908, two stained glass windows from Tiffany Galleries in New York City were installed. A pipe organ was installed in 1929. It was bought from Hillyer and Land of Alliance, Ohio. The gable roof was originally finished with zinc. It's now covered with corrugated iron, probably applied during the repair work done in 1929-30. More repairs were made after a July 1979 fire destroyed a portion of the tower and interior. The original 1859 bell was cracked in the fire. It is now on display in the church.

Ellis, William. A journal of a tour around Hawaiʻi, the largest of the Sandwich Islands. New York. Crocker and Brewster, 1825.

Macrae, James. Wilson, William Frederick. With Lord Byron at the Sandwich Islands in 1825: Being Extracts from the MS Diary of James Macrae, scottish botanist. University of Michigan, 1922.