The Three Chimneys Archaeological Site, located in Ormond Beach, Florida, is the oldest successful British sugar plantation, sugar mill, and rum distillery in the United States. Established in 1768 on land granted by King George III, the sugar plantation was originally known as the "Swamp Settlement." In the early 1900s, the property was the location of a tourist destination called "Camp Fagan." Three Chimneys Archaeological Site has been excavated and is one of the stops on the Ormond Beach Historical Society’s Scenic Bus Tour. 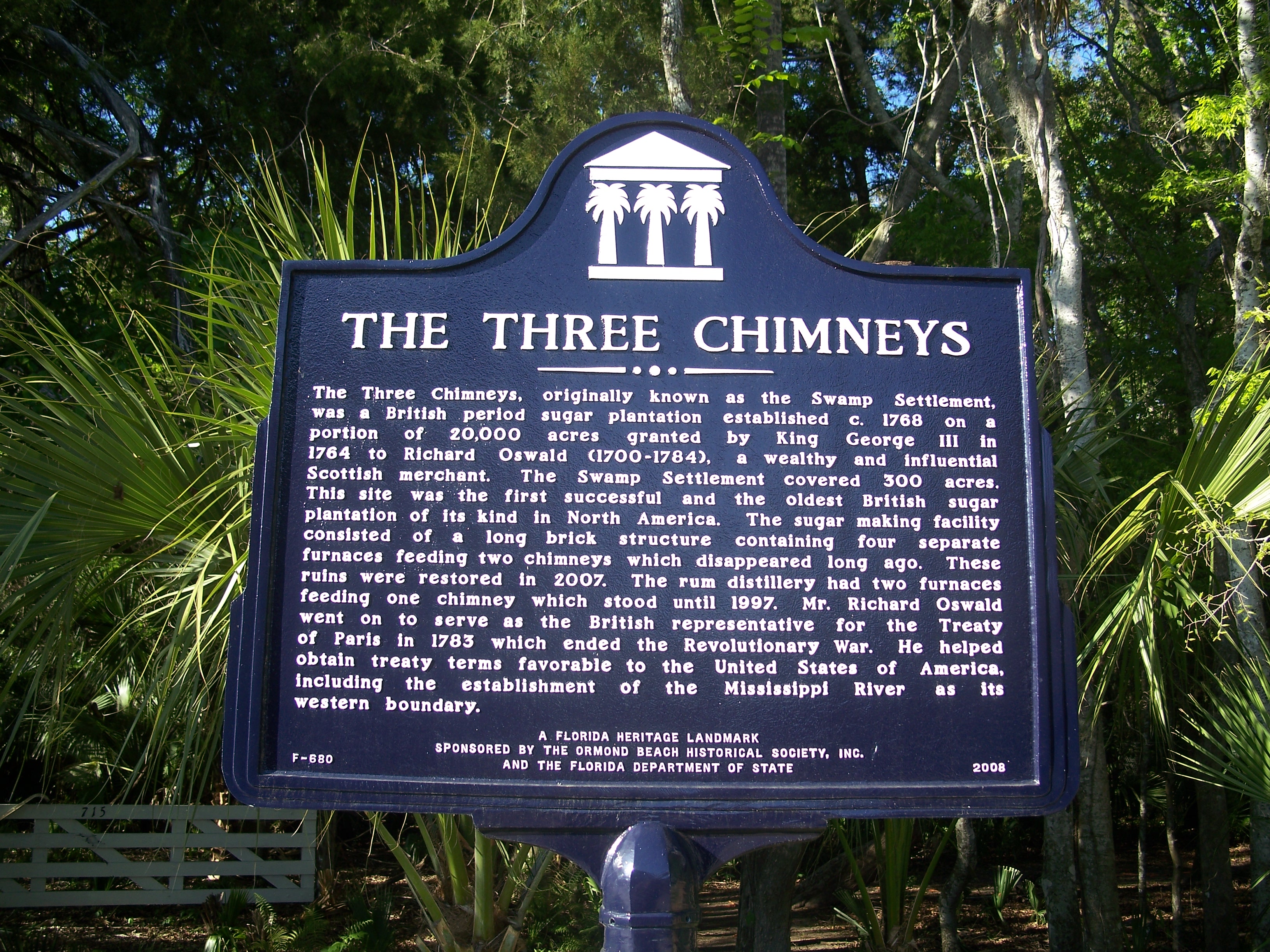 In 1764, King George III granted 20,000 acres of land to Richard Oswald, a wealthy Scotsman. Some of this property would become the “Swamp Settlement,” now known as the Three Chimney’s Archaeological Site. Located near Ormond Beach, it is the oldest successful British sugar plantation, sugar mill, and distillery in the country.

Richard Oswald made his fortune via the slave trade and by supplying bread to English troops during the Seven Year’s War. A resident of Virginia, Oswald never visited Florida, but he shipped supplies to Governor James Grant to develop “Mt. Oswald” in what is now Tomoka State Park. The 1765 shipment included approximately 50 slaves and supplies for sugar, rum, and indigo production. This development, intended to produce sugarcane, failed as a result of a freeze and was subsequently converted to cultivate rice and indigo. Development of the Swamp Settlement, located 6 miles to the south, was more successful.

The Swamp Settlement estate consisted of 300 cleared acres and a number of buildings, including the overseer’s residence and grain houses, in addition to a sugar house, sugar mill, and distillery works. It is distinctive owing, in part, to the use of imported bricks and local coquina rock as construction materials. The plantation relied heavily on manual labor, largely provided by slaves. Overseers operated the property on behalf of their landlord from 1768 until their abandonment by 1785.

Oswald himself stayed in London for the duration of the Revolutionary War, and served as the British delegate afterwards; he worked with individuals such as Benjamin Franklin and John Jay to draft the British peace terms. As a result of the war, Britain ceded Florida to Spain. The British plantations were abandoned, including Oswald’s. An 1803 land grant by Spain to Henry Yonge included Three Chimneys, who made an unsuccessful effort to develop the site. The property was forgotten, and later visitors to the site attributed the eponymous brick chimneys to Spanish missionaries.

Billy Fagan acquired the Three Chimney’s site in 1914. On it, he built a house atop the old sugar boiling facility. He also started “Camp Fagan,” a tourist attraction that included a museum, alligators, and a tree stand overlooking the Atlantic. The camp was intended to entertain visitors to Hotel Ormond, run by his friend and employer, John Anderson.

The State of Florida acquired the property and, in 2003, leased it to the Ormond Beach Historical Society. The OBHS restored deteriorating parts of the site in 2007. In the 1960s, one of the chimneys (part of the rum distillery) fell over and had to be rebuilt. As a result of these efforts, the National Park Serviced recognized Three Chimney’s Archaeological site and added it to the National Register of Historic Places in 2010. Today, the site is open for tourism; it is one of 20+ stops made on the OBHS’s Scenic Bus tour. Interested parties can call their main office to schedule a reservation.