The Mala Compra Plantation Archaeological Site is located at Bings Landing County Park in Flagler County, Florida. Mala Compra, which translates to "Bad Purchase," was part of a large plantation system. It produced cotton from 1816 until 1836, when it was burned down by Seminoles during the Second Seminole War. Archaeologists at the site have uncovered thousands of historical artifacts relating to plantation life, and the main structures now serve as an interactive historical exhibit for educational and recreational purposes. 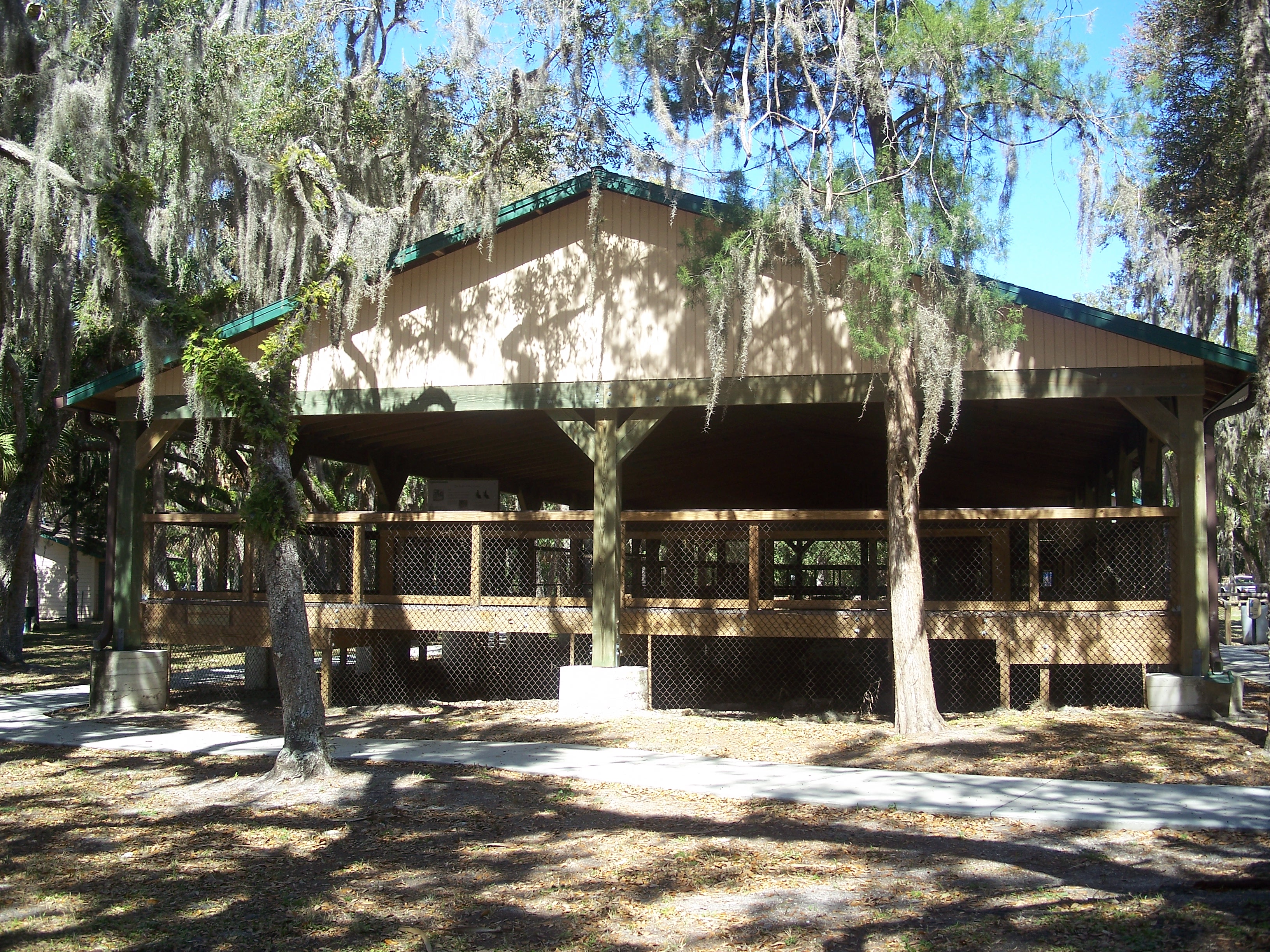 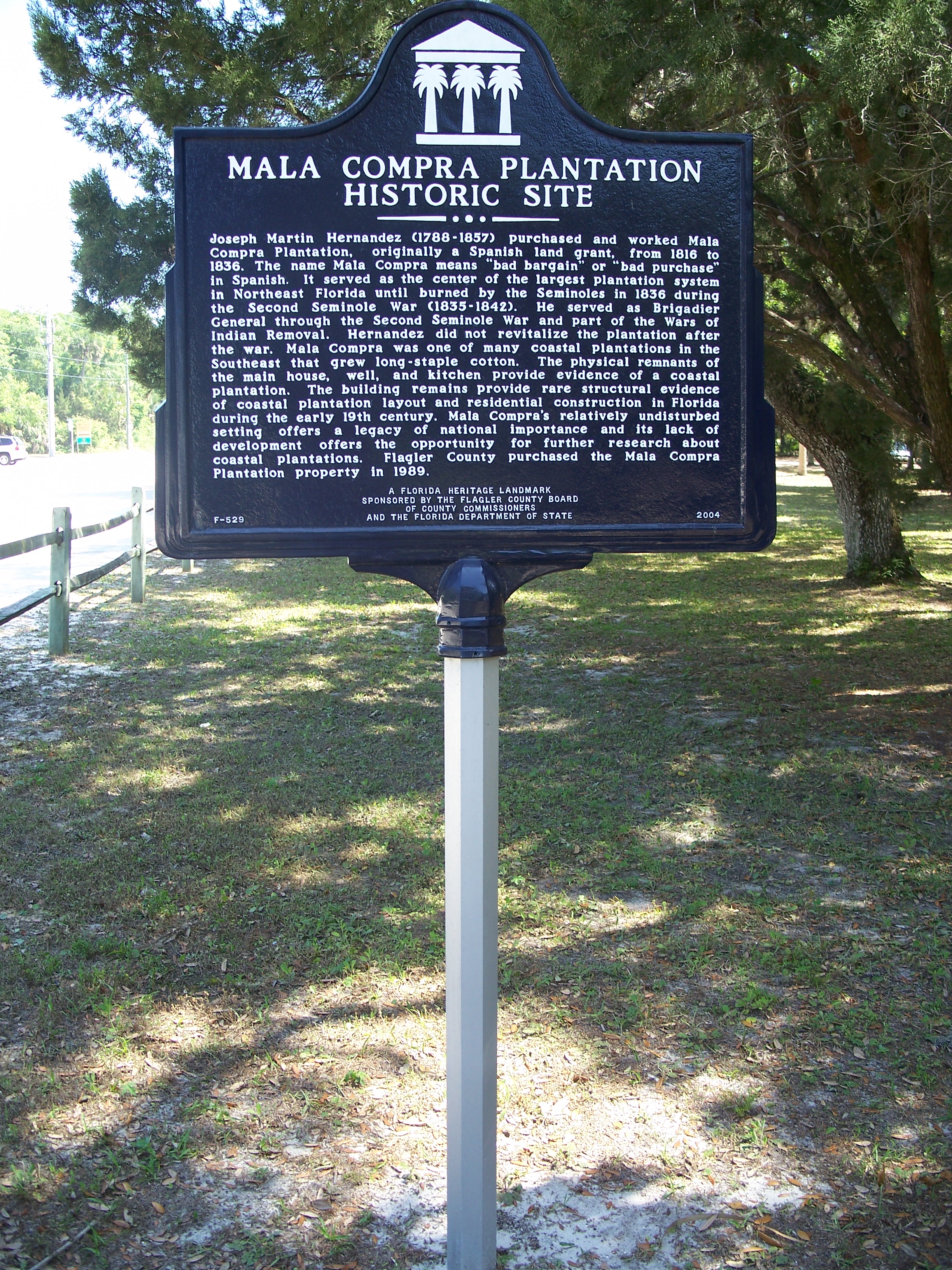 Historic document pertaining to the Spanish land grant given to Joseph M. Hernandez 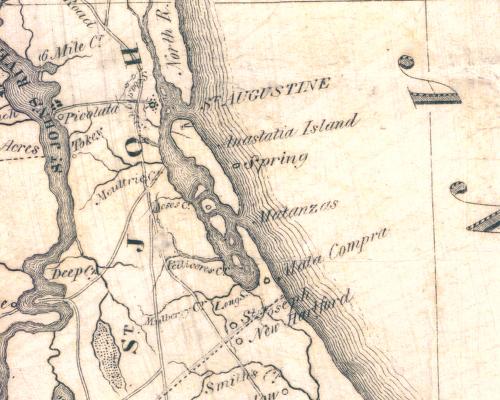 The Mala Compra Plantation Archaeological Site is located on the east bank of the Matanzas River, west of the intersection of State Road A1A and Mala Compra Drive, at Bings Landing County Park in Flagler County. The National Park Service added this site to the U.S. National Register of Historic Places in 2004. Owned by Joseph Marion Hernández (1788–1857), Mala Compra functioned as a working cotton plantation within a large system of northeastern Florida plantations. The name Mala Compra translates to "bad bargain" or "bad purchase" in Spanish.

Joseph Hernández is an important figure in Florida history. He served as Florida’s first Congressional delegate in 1822 and 1823, and was the first Hispanic in Congress. He also commanded troops as a brigadier general in the Florida Militia during the Second Seminole War. In 1816, the Spanish government granted Hernández a plot of land, which he called the “St. Joseph” plantation. He purchased an additional 800 acres, named “Mala Compra” by a former owner, from Father Miguel Cosby. Two years later, he acquired another 375 acres of adjoining area (“Bella Vista”). St. Joseph grew sugarcane, Mala Compra mainly Sea Island cotton. Oranges were also cultivated here.

Hernández’s country home sat on the Mala Compra property. It was a 1 ½-story, 18-foot x 30-foot structure built upon a coquina foundation. Coquina, a shellstone indigenous to Florida, was also utilized in for the house’s two fireplaces. A detached kitchen, which had a loft for curing tobacco, wooden warehouse for agricultural goods, corn crib, privy, driver’s house, and slave cabins were also built on site. Its single-, double-, and 24-foot gins were operated by horses.

Mala Compra’s geographical situation on the coastal barrier islands and Matanzas River marshlands made it well-situated as a spot for native wildlife to gather. John James Audubon’s work, The Birds of America, features an American coot he shot while visiting the plantation in 1831.

After the outbreak of the Second Seminole War in 1835, the U.S. government occupied Mala Compra and St. Joseph. They fortified the houses to serve as military posts and seized valuable goods (such as corn, hay, sugarcane, and cattle) belonging to General Hernández. Further damage to the plantation occurred in 1836 when Seminoles burned the cotton warehouse and drove off or captured 80 slaves.

In 1989, Flagler County purchased the property (an abandoned fish camp at the time), unaware of the importance of the site. Intending to use the land as a park and nature trail, workers began clearing away trash. In doing so, they discovered the ruins of a plantation. Archaeological investigations into the site began in 1999 and identified the main house and kitchen. These have been interpreted to serve as an interactive historical exhibit for education and recreation. Additionally, over 14,00 artifacts have been uncovered at Mala Compra, including ceramic fragments, wine bottles, household goods, and parts of firearms. Many of these artifacts are on display, and visitors to the site can walk on the elevated boardwalk surrounding the remains. The site has been recognized by the Society for Historic Archaeology and the Florida Trust for Historic Preservation owing to its importance in promoting Florida archaeology.