Since 2006, this historic building has been home to the Mountaineer Military Museum. The museum offers exhibits drawn from the collection of museum founder Ron McVaney. The museum is supported by the Lewis County Board of Education that offered this space to McVaney for the purpose of maintaining a museum. The building was previously home to Weston Colored School, the first and only public school for African Americans in Weston from 1882 through May 1954. The school included eight grades and taught children ranging in age from six to sixteen. The building includes a marker and information about the school. Growing up in a little coal mining community in Harrison County, WV, three young men received their Draft Notices. Ron McVaney was assigned to Germany…and his two friends were sent to Vietnam. Ron was the ONLY one to come home. Asked to be a pall-bearer at his best friend’s funeral…he made a graveside “PROMISE”: “I won’t let anyone forget you.” It is “THE PROMISE” that is the underlying Theme of The MOUNTAINEER MILITARY MUSEUM! Since that time, Ron began to collect military items from yard sales, flea markets, surplus stores and an occasional Military Collectors Show. “I thought having those things around would help me remember my friend.” The collection grew, and SOON filled every nook and cranny available. Ron retired from his job, and his wife suggested that he “…share the collection with others, and tell the story of his friend…and others like him…who served in Vietnam.” Ron took the bulk of his retirement and rented a building in Buckhannon. The collection opened there in May 2003…but by October, the Museum had to close its doors due to lack of funding and support. By the end of October, the Museum had found a temporary home in one room of The Weston State Hospital. The Museum was well received, and was invited to return the following spring tourist season. During that time, the group of caretakers invited the McVaney’s to relocate the collection to a larger suite in the front of the building. The Museum reopened in May of 2005. But, by October 2006, the “Hospital” was locked down due to fire code violations. The McVaney’s collection had to be packed away. Soon…bins and boxes overtook the McVaney’s home. The search began to find a new site. It was suggested that Ron approach the Lewis County Board of Education, who owns the Historic Weston Colored School. The local Convention and Visitors Bureau was using the building, but was getting ready to vacate to another site. With a scrapbook of pictures in hand, the Board agreed to give the McVaney’s a perpetual lease to the School Building. The McVaney’s moved items to the site in February of 2006…and Ron began building. The School House gave the collection 700 square feet of display space…and it didn’t take long to fill every inch. In May 2006, a ribbon cutting was held with local dignitaries, families of Vietnam Veterans, and several members of the Community. The Mountaineer Military Museum was very well received. “THE PROMISE” had a new home. Soon, word spread, saying: “You should see the Mountaineer Military Museum in OUR TOWN!” Folks came…from all over! With support from the Lewis County Convention and Visitors Bureau, the Museum was able to get travel cards sent to Welcoming Centers all over West Virginia, and added to the West Virginia Tourism Travel Guide. The collection continued to grow, as local families began to bring artifacts and remembrances of their Military Heroes to be placed in the Museum. THE HALL OF HEROES was conceived to be a place to bring pictures of your service member to have a permanent place of Honor and Remembrance. Display spaces that were initially used to house items from a particular era, were reconfigured to be windows to honor an Individual. Some very rare and unique items have found their home at the Museum. After a few years, the small 700 square-foot space had served “THE PROMISE” to its capacity. Early 2011, The Lewis County School Board secured funding to begin construction on an addition to the Museum. This addition space utilized the ‘back-yard’ of the Colored School. ANOTHER “Chapter” was beginning. By construction’s end, an additional 2,100 square-feet of space had been added. Ron and a local Vietnam Veteran, Gary Rogers, began building display spaces and dioramas. The addition was build and opened in two stages. The first part opened in 2012, the second in 2014. In the “Joseph Mace Annex”, named for (then) Lewis County Board of Education Superintendent and Vietnam Veteran, the space was used to arrange artifacts by “Eras”: CIVIL WAR, WWI, WW II, KOREA, VIETNAM, IRAQ/WOT. The McVaney’s are often asked, “What is the Admission cost?” Their answer: “THE VETERAN PAID THE PRICE FOR YOU!” The Museum does not charge admission, but operates solely on donations received from visitors, tour groups, and groups and organizations from the area throughout the year. Summer fundraising yard sales and raffles supplement the Museum’s Winter Utilities and Building Maintenance Funds when the Museum closes for the winter months. From December through April, the McVaney’s use that time to redo displays and provide Building maintenance. The Museum’s NUMBER ONE Fundraiser is “THE PROMISE” PATCH. This embroidered patch was conceived as a perpetual fundraiser for the Museum. It works like this: The Patch costs $25.00. With your ownership of “THE PROMISE” PATCH, you are then making YOUR “Promise” to support the Museum with a yearly financial donation! “THE PROMISE” Patch has owners as far away as Hawaii and New Zealand…and everywhere in between. Contact us, if you would like to make YOUR “Promise”. The Museum reopens each Spring on the first Saturday of April. The Museum has several events during the year to raise funds for building maintenance and display upgrades, sponsored by local Veterans, Civic, and Motorcycle Groups. 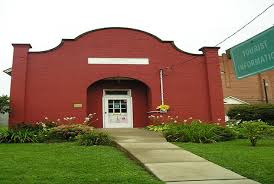 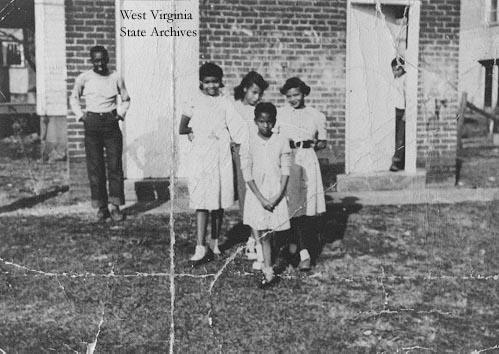 Originally Black communities created and maintained numerous schools with private funds dating back to the early 1860s. The Weston School was only the fourth school building for African American children supported by public funds in West Virginia. In the fall of 1869, English immigrant Benjamin Owen, who was the founder of the Weston Sentinel, started a school open to African American children. Although the state legislature passed a law establishing public schools for African Americans in 1866 and revised the West Virginia Constitution in 1872 to require separate schools for white and Black students, many Black children in the state still had no local school.

At the time the state law mandated that a school for Black students must be built only if there were at least 30 Black children between the ages of six and twenty-one within a certain district. In 1880, the Black population of the Lewis County reached 383, with 180 African Americans living in the boundaries of Weston Independent School District. (The rest of the county's Black population was scattered, with many working as farm laborers, farm owners, or working at a tannery in Jane Lew. Blacks in Weston were employed as laborers or domestics.) There were sixteen children attending a church school in 1880. In 1881, the legislature revised their school statutes and lowered the number of children required for a Black public school to fifteen.

The revised law required the Weston Independent Schools Board to build a public school for Black children. Board member William G. Bennett acquired a lot on June 18, 1881 and construction began. G. W. Lawson, superintendent of Lewis County schools, reported in a letter to the Weston Democrat during the spring of 1883 that, "the board of education erected a very neat brick school building for the colored children the past year."1 The building was not as large as it is now. It had three windows and a wooden front porch. The roof was slate. There was an outdoor toilet to the rear and a hand-dug well on the side. Heat came from a coal or wood stove that was vented right there.

Sometime in the 1940s a hot lunch program was initiated. The first cook, Sally Perkins, prepared the meals in a curtained-off area where the copier was. In the late 40's, indoor plumbing was installed and the cafeteria was moved to the cement block building in the rear. When the school closed in 1954, after the Brown vs Board of Education decision, there were only two students - Frieda Perkins and Mary Queen. The teacher was Perry Arters.

The Weston Colored School was not unlike most of the 103 one-room schools in Lewis County. Eight grades were taught to children ranging in age from six to fifteen or sixteen. Reading, writing, arithmetic, spelling, history and geography were frequently learned by rote and example. There were spelling bees, field trips and programs for parents and friends. When the school closed, its students were accepted at St. Patrick Catholic School because Weston's public schools were not integrated until 1956.

After the school closed, the building was used as a storage unit and was later utilized as a vocational agricultural classroom for Lewis County High School. The building later became an educational facility that taught vocational skills for the mentally challenged students of the Lewis County school system.

Today the building is home to the Mountaineer Military Museum thanks to the efforts and personal collection of museum creator Ron McVaney. Utilizing artifacts he collected over four decades, McVaney designed this museum to honor veterans and serve as a tribute to his childhood friends who were killed in Vietnam. He collected military artifacts for many years and received support from the Lewis County Board of Education who leased this historic building to him in 2005. The museum opened its doors in 2006.

The museum offers the popular "VET-TOGETHER" program each Saturday of Memorial Day weekend. This event allows area veterans and the community to come together for fellowship and to honor those who gave their lives in the service of their country.

The Promise Made, That Would Not Die. Mountaineer Military Museum. Accessed February 20, 2017. http://mountaineermilitarymuseum.com/story.html.

April 1 to December 1: Saturdays only 10am - 4pm All others by appointments only.

Starting at the coffee shop, see some of Weston's most historic homes as you loop through downtown and end at the Mountaineer Military Museum.

Starting at the Mountaineer Military Museum head down Center Avenue before turning left on 6 Street, toward Main Avenue. From there walk down Main Avenue until you reach the coffee shop.