Fifty-five sites within the Motor Row District of Chicago's South Michigan Avenue are listed on the National Register of Historic Places. Once housing 116 auto showrooms, the area later became a recording mecca for Chicago's Blues musicians. It also was the home of the African American newspaper the "Chicago Defender." Motor Row Brewing revived the former Federal Motor Car Co. showroom that was built in 1910.

Motor Row Brewing - formerly the Federal Motor Car Showroom, circa 1910). Next to it is the Motor Row Art Gallery and the street denotes the numerous historic landmarks that made it "Motor Row." (Photo Credit: Google Maps) 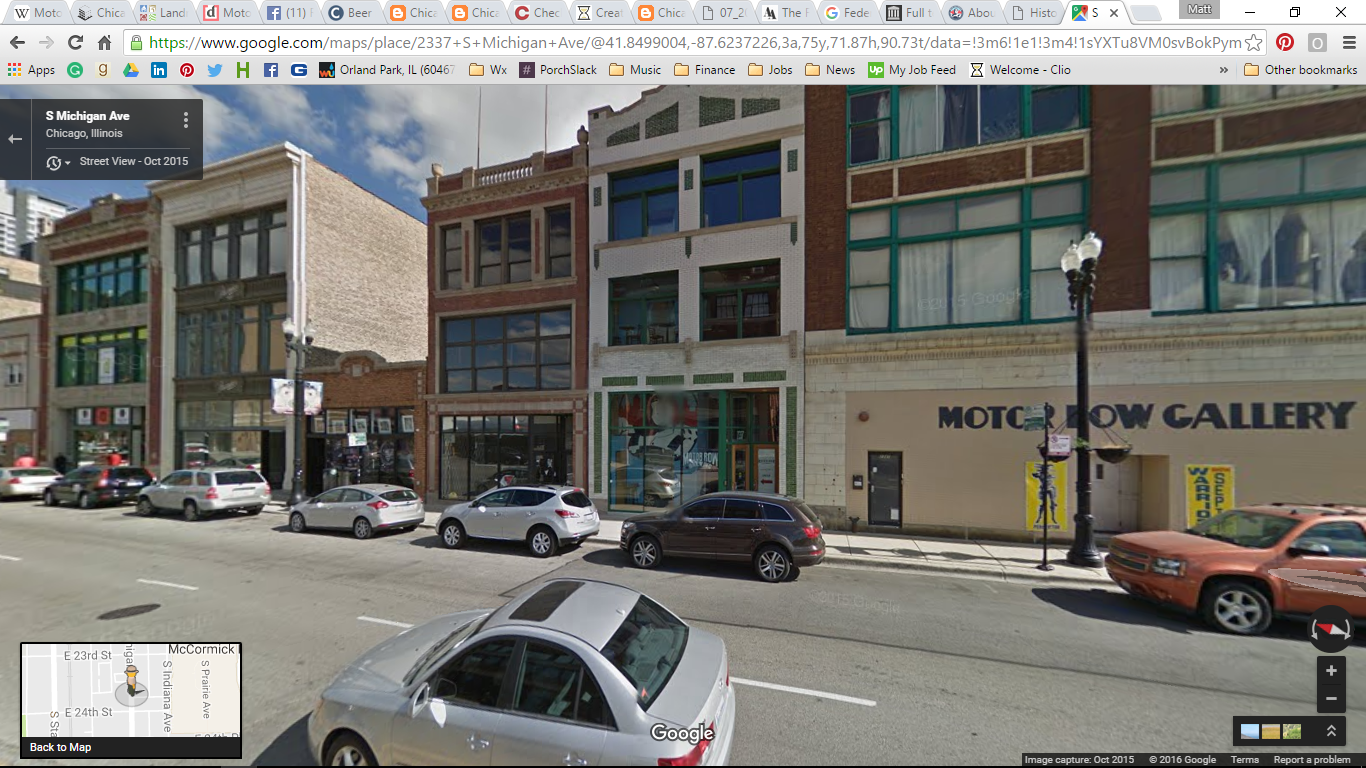 The City of Chicago states:

The Motor Row District is considered to be the largest, intact early “motor colony” in the United States. This street-wall along South Michigan Avenue is formed by the continuous masonry fronts of showroom buildings and forms an indelible urban image of Chicago at the beginning of the 20th century, when the automobile became a standard feature of American life. This three story commercial building was built in 1910 for the Federal Motor Car Company Showroom. When the owner purchased the vacant building, portions of this front façade were hazardous, with structurally unsound brick walls and substantial water infiltration from the roof. The owner obtained an emergency repair permit and rebuilt the upper part of the façade using salvaged glazed brick. The overall rehabilitation project, which was subsidized with Tax Increment Financing, also included new storefronts and windows. The restored building is now used as a microbrewery with a bar area on the ground floor and office space on the upper floors.1

As the nation moved further away from coal and trains (and horses) to automobiles and horses, numerous auto rows developed within cities around the turn of the 20th century. Automobile companies sought to create districts where the sale and repair of motorized cars could become an easy urban shopping experience. At its peak, as many as 116 different makes of automobiles were being sold on Motor Row.

After World War II, as the automobile industry changed and modernized often moving its headquarters to warmer locations, the area transitioned into a mecca for music. It became better known as "Record Row" in the 1950s and 1960s. The most famous spot lay just a few blocks from Motor Row Brewing -- the famous Chess Records and the current home of Willie Dixon’s “Blues Heaven” Foundation and museum. Indeed, musicians such as Muddy Waters, Howlin' Wolf, Little Walter, Etta James, Chuck Berry and Bo Diddley all recorded at Chess, and played in the region. In fact, The Rolling Stones made a pilgrimage to record just up the street.

The brewery celebrates that past with a Blues and Brews night, every Monday night specifically. While not historical in of itself, the legacy of that blues era has been reinvigorated by Motor Row Brewing. In that regard, the physical building (the brewery) represents the automobile era -- the Motor Row name, while the cultural actives within its walls represent a different aspect of the neighborhood's history, which included many African Americans and a thriving blues scene. It is a mix of environmental, architectural, urban, and cultural history -- all found in one building. The Motor Row District was designated a Chicago Landmark on December 13, 2000. In 2002, Fifty-five locations within the district were listed on the National Register for Historic Places.