Established in 1975, the Calumet City Historical Society is now located in the city's cultural center. The organization collects and preserves materials related to the history and culture of the city and region. It offers tours of an 1836 log cabin, historic artifacts, displays, and a library of local and genealogical materials. The log cabin is located in Veteran's Park at Burnham & 167th.

Calumet City Historical Society offers a small museum and materials for researchers in addition to hosting events and operating and preserving historical sites in the community. 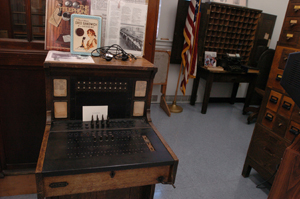 Although incorporated in 1893, the city did not formally adopt the name "Calumet City," until 1924. The name "Calumet" is derived from Native American term "Kalamick," which referred to the Little Calumet watershed. The first inhabitants relied on the Little Calumet River to fish and trap waterfowl, muskrats and minks. In 1962, construction crews unearthed hammer stones, blades, flint-like quartz pebbles and arrowheads in the Shabbonna Woods area, west of Torrence Avenue and in adjacent Green Lake Woods.

German immigrant Hans Johann Schrum arrived as the first permanent non-Native American resident to what is now Calumet City in 1863 during the U.S. Civil War. At $17 per acre -- a hefty price in the late 19th century -- Schrum and his wife quickly took ownership of 275 acres between what is now State Line Road and the Little Calumet River. Throughout the course of their stay, they continued to buy land until surpassing 600 acres.
The Schrum family operated the Calumet Dairy and Calumet Pickle Works, as well as grew potatoes and harvested maple syrup. Taking advantage of the burgeoning German and central European population in Chicago and northwest Indiana, the Schrum family sent delivery trucks to much of the region, delivering pickles and hot dog condiments that included relish, peppers, horseradish, and ketchup. They also sold milk for a $.05 per quart. The Schrum family grew wealthy as a result of their land holdings and profitable business ventures and it attracted other families to the region -- the birth of Calumet commenced.2
German Lutherans arrived in droves to an area known as Sobieski Park in the early 1880s. Polish immigrants arrived shortly thereafter and settled south of the German enclave after 1885. One of the first missions of both immigrants involved erecting a place of worship. The Germans opened the doors to St. John's Lutheran church in the summer of 1891, which included a school that provided students education in German.

Meanwhile, immigrant Poles celebrated their first Catholic mass at St. Andrew the Apostle church in February of 1892. A tornado came through later that year and destroyed it, however. The Poles quickly rebuilt the church, only to have it destroyed by a fire in 1918; they were forced to rebuild it again.3

After World War II, many new immigrants arrived, such as Irish and Italians, as well as more Poles. The hodgepodge of ethnicities and cultures dominated the demographic landscape of Calumet City in decades following the war. Nearly 5,000 people resided in Calumet City in 1910, whereas in 1960 that number grew to more than 20,000.
During the post World War II era, several factories arrived taking advantage of the Calumet City's waterway system, both for navigation purposes and as a cooling agent (and dumping grounds). Steel mills, grain companies, and oil corporations such as Standard Oil (now British Petroleum) provided jobs and turned Cal City into an industrial city.  The population growth and the prevalence of industry (notably in an era where environmental responsibility was largely lacking) stressed the city's infrastructure and polluted the waters -- the water today is vastly different from the waters used by Native Americans and the Schrum family.

Although it is known the Schrum family resided in the cabin, no one is sure if they built it or if it was already there when they arrived in 1863. However, the Historical Society's website explains, "According to Wilburt Hasbrouck, a well-known preservationist-architect that the Calumet City Historical Society contacted, estimated that the lower part of the cabin was built in the 1830s and judging from the saw marks, the upper portion of the cabin was built in the 1860s.  The lower part was used as a kitchen-living room and the upper part for sleeping.   The upper room was reached by a ladder.  Later on, additions were added as the family grew.  One of the additions on the west side was for bedrooms and another on the north was a large front room."

Discovered in 1979 under two layers of siding, the historical society saved the cabin from destruction or plans to remove it and build a mini-mall. Volunteers spend the next couple of years removing each log and then rebuilding the cabin with local businesses footing the bill. Today, visitors can visit the cabin in its location near the banks of the Little Calumet River, one half block west of Burnham Avenue just off Heritage Drive (166th Street).