Costumes of the Americas Museum

Located inside the Mitte Cultural Education Center in Dean Porter Park, the Costumes of the Americas Museum houses the world's largest collection of traditional, indigenous clothing—as well as accessories such as jewelry and headpieces—from the Americas and the Caribbean. The center and the museum opened in 2005.

The Costumes of the Americas Museum is located inside the Mitte Cultural Education Center, moved there in 1997 from the Brownsville, Texas chapter of the Pan-American Round Table. 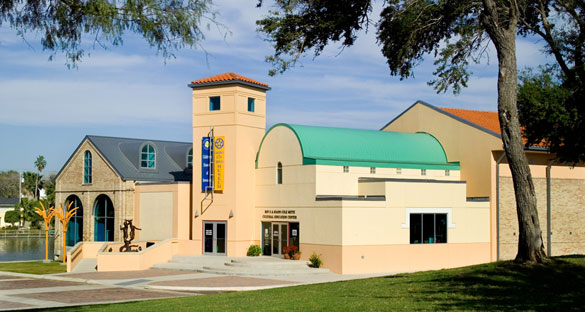 The entrance to the Costumes of the Americas Museum displays the flags of the many nations represented by its vast collection of clothing, shoes, jewelry, and accessories. 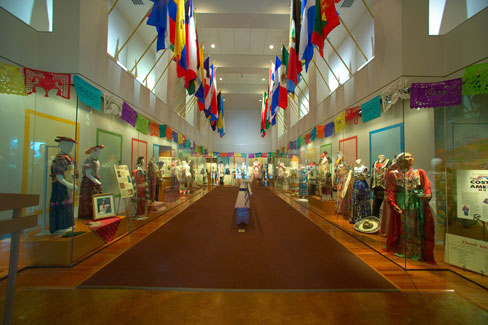 The Costumes of the Americas Museum works to preserve and share the history and significance of authentic indigenous clothing and jewelry from throughout Mexico. By offering programs and exhibits, the museum hopes to foster greater understanding and appreciation for the history and cultural heritage embodied by these costumes.

The roots of the museum lie in the adventurous life of Florence Terry Griswold, who lived on the porous border with Mexico and the United States in the 1910s. A bilingual traveler, Griswold lived and embraced the concept of pan-Americanism: mutual protection and the promotion of better commercial and cultural relations among the nations of North America and South America, based on a community of interests stemming from geographical proximity. She founded the Pan American Round Table Movement in 1916 to promote understanding and friendliness among all women across both continents.  Chapters of the organization began to appear in other parts of the Americas.

The Brownsville chapter of the organization was founded in 1932 by Bessie K. Johnson, a recent immigrant from Mexico and one of that nation's leading experts on Mexican folklore and native dress. Johnson added her collection of clothing and accessories while also encouraging members of her chapter of to collect more items. She assigned each Brownsville Chapter participant a particular nation of North or South America and challenged each one to acquire a costume from her assigned country, seeing that acquisition as a method of learning more about these countries and their women. The ladies heartily took up Johnson's challenge, and thus began one of the finest costume collections in the Western Hemisphere, which would serve as the basis of the museum today.

Over the years, the Brownsville chapter's costume collection continued to grow via acquisitions and gifts from members and friends of the Pan-American Round Table, from private collections, and from bequests such as that of Johnson. By the mid-1990s it was one of the largest collections of authentic North, Central, and South American costumes in the world, with clothing, shoes, jewelry, and accessories from all reaches of the Western Hemisphere.

In 1997, that Brownsville chapter was invited to move its costume collection to a part of the Mitte Cultural Education Center within Dean Porter Park. To protect the collection, the Pan American Round Table Costume Corporation was formed. The Brownsville group transferred the entire collection to the corporation for safe keeping and the management of the museum. The Mitte Cultural Education Center, encompassing the museum collection and educational outreach activities, opened its doors on May 6, 2005. The educational component offers a traveling collection for local academic functions or private viewings to organizations or other interested parties.

This trail begins near the border with stops at the Neale House, Fort Brown, and the Brownsville Heritage Museum. The tour moves through the downtown area with Market Square, the Immaculate Conception Cathedral, several government buildings, and multiple historic homes and buildings before concluding at the city's museum district. There are numerous other Clio entries throughout the city that are a short drive from this tour.