Five Points is an historic neighborhood in north-eastern Denver. One of the largest neighborhoods in the city, it is a place of great significance for both African American heritage and music history, being a place that is essentially synonymous with jazz, and remains one of the most vibrant parts of the city to this day. 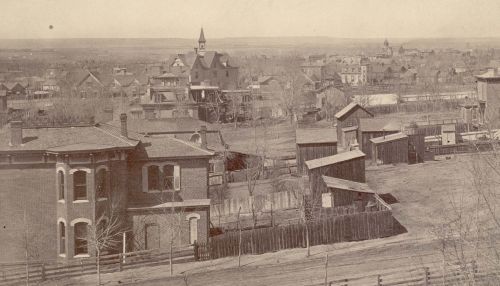 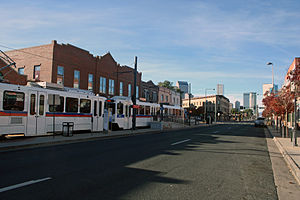 This marker offers a brief history of the neighborhood and is located near the entrance to the Park-N-Ride station. 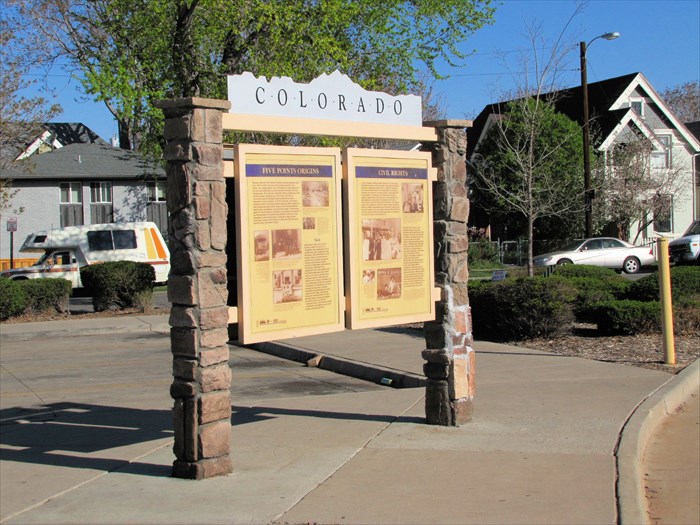 So-called in for its location on the junction of five major streets (the name was adopted in 1881 by the main streetcar line that ran through the area), the Five Points neighborhood developed as Denver’s city limits extended northwards by around sixteen hundred acres from the early 1870s. For the following two decades Denver was one of the fastest growing cities in the United States. The neighborhood was mainly residential at first, with gradual business and industrial development taking place in the later 1870s; Crescent Flour Mills, Colorado Iron Works, and the Denver Fire Clay Company were some of the more famous businesses that established themselves in the rapidly developing suburb. The blocks featured a mixture of brick-and-mortar homes built in the Italianate and Queen Anne styles, as well as many timber structures (later outlawed by the City Council, as they posed a fire risk – though the threat was mitigated by the presence of Denver’s first all-Black fire crew at the local Fire Station #3). Three schools were designed and built by Robert Roeschlaub, the first licensed architect in Colorado, between 1879 and 1881.

The northward expansion of the city slowed down during the so-called “silver crash”, otherwise known as the Denver Depression, of 1893. As time went by and the richer residents of the suburbs moved to Capitol Hill, Five Points became the home to a thriving African American cultural scene. By the early 1920s almost the entire African American population of Denver were concentrated to Five Points and the nearby Whittier neighbourhood. The neighbourhood also had large Mexican and Japanese communities. Many had migrated to the city from Georgia to work in the railroad yards of the city, or as seasonal workers on the farms of Western Slope. Five Points also had a large Jewish population, who attended the Temple Emanuel on 24th and Curtis Streets.

Despite facing hostile conditions, with Denver’s non-White population facing much segregation, discrimination, and even violence – especially with the rise of the Ku Klux Klan in the city – throughout the thirties, forties, and fifties Five Points became the major African American cultural and entertainment district in the city. The neighborhood was the centre of the Denver desegregation movement, serving as the headquarters of the Colorado-Wyoming branch of the National Association for the Advancement of Colored People (NAACP). The renowned Mexican-American boxer, Rodolfo “Corky” Gonzalez, opened Denver’s first sports bar – Corky’s Corner – in Five Points, and was later extremely active in promoting the rights of the Chicano residents of Denver as one of the main leaders of the Chicano Movement. With the gradual desegregation of the 1960s and 1970s came demographic changes to Five Points, as increasingly affluent African Americans chose to reside in different parts of the city. Many of the most important venues and businesses closed as generations passed, and the area declined to the point that several of the most historic blocks were demolished by the city council. The neighbourhood slowly lost its cultural exceptionality, though revitalisation initiatives by the Denver Office of Economic Development and other stakeholders in the late twentieth and early twenty first centuries have ensured that Five Points preserves many of its most important sites and its vibrant atmosphere.

Music is one of the key aspects of Five Points’ heritage significance. Also known as the “Harlem of the West”, Five Points featured a number of music halls and clubs that were extremely popular among local residents and those who traveled from other parts of the city. One of the most famous jazz and blues clubs in the neighborhood was Rice's Tap Room and Oven. Founded by the Texas-born Otha Rice, Sr. (1916-1993), the two-story Tap Room and Oven hosted regular live music events each week. Leroy Smith’s Rhythm Records and Sporting Goods Shop was a popular music store established in 1939 that ran regular beauty pageants for local African Americans. Smith also owned the  Rainbow Ballroom, and was extremely active in promoting the artists that played there, such as Billy Holiday, James Brown, Nat King Cole, and Lou Rawls. The residents from Downtown Denver could travel to Five Points, and other new neighborhoods that had sprang up in the late nineteenth century, via a public transport system first developed by the Denver Horse Railroad Company in 1871. The Niederhut Carriage Company was also based in Five Points. Founded by two immigrant German brothers, the company provided horse-drawn carriages and later custom automobiles for local transport companies.

Some of the heritage sites that can be seen during a visit to Five Points include: the Glenarm YMCA (built in 1924, and served as the unofficial “town hall” of Five Points); the Burlington Hotel (built in 1891 by noted Denver architect Frank Edbrooke, and today used as residential apartments); the Rossonian Hotel (originally opened as the Baxter and later an exceptionally popular jazz club); and the Zion Baptist Church (Colorado’s earliest African American congregation, established in 1865). Visitors should also walk down Champa Street, where they can view more than five hundred exceptionally well-preserved Victorian-era homes. It is recommended to visit Five Points during the annual Juneteenth Celebration, which commemorates the arrival of the news of Abraham Lincoln’s 1862 Emancipation Proclamation to Five Points – on June 19th, 1865! This celebration of local African American culture features a parade, concerts, and a staggering selection of street foods.