The La Jolla Caves are seven caves found on the La Jolla coast, north of San Diego, that have been enjoyed as a tourist attraction since the 1860s. They have much cultural and natural heritage significance, being a protected Ecological Reserve known as the San Diego La Jolla Underwater Park and one of the most notable coastal landmarks in the state. 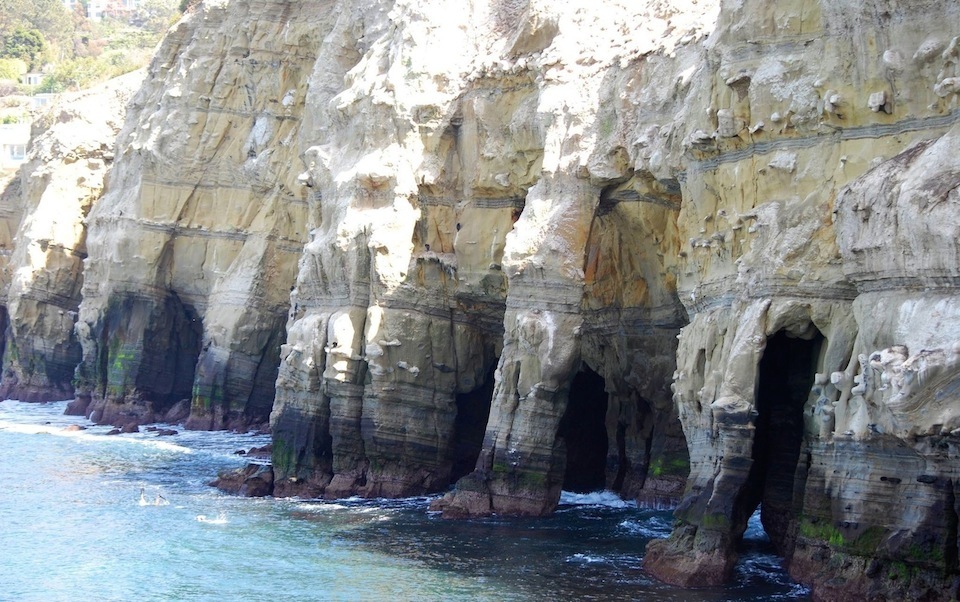 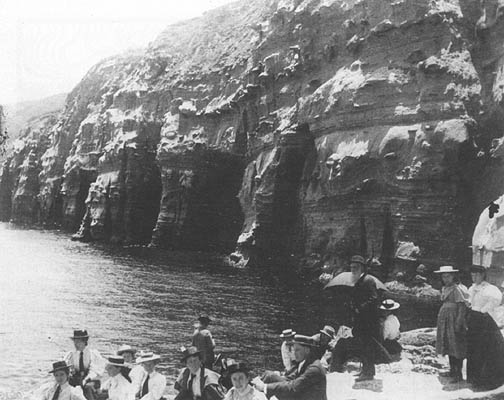 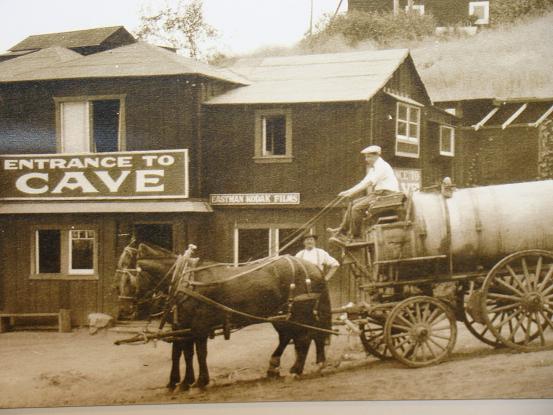 The caves were formed as the seventy five million year old Cretaceous sandstone cliff was gradually weathered by the waves. The cave interiors display a range of colours, due to mineral deposits on the walls and ceilings. From at least the early 1800s people have been clambering around the rocks and cliffs around La Jolla. Amongst the earliest users of the caves were opium smugglers, human traffickers, immigrants from Asia, and even pirates. They have dark passages that extend deeply into the headland, which made them perfect for unloading small boats full or drugs and stowaways. During the prohibition the caves were used to smuggle contraband whisky. In the later 1890s they were a popular site for tourists to travel and view high divers leaping from the clifftops to the ocean one hundred and forty feet below. On one particularly astounding occasion in 1898 a regular diver, Professor Horace Pool, covered himself in an inflammable oil and set himself alight before jumping from the cliff – and survived! Tourists could pay to be lowered by rope from Devil’s Slide to be afforded a unique view into the caves.

The seven caves acquired a number of different names over time, and are today known amongst lifeguards as White Lady, Little Sister, Sea Surprise, Arch Cave, Sunny Jim, and Clam Cave. The White Lady is so called by its association with a haunting tale about a young and recently married couple, the Hathaways, who were spending their honeymoon in La Jolla in the 19th century. The young Mrs. Hathaway was collecting sea shells on the beach near the caves before being overcome by a wave that carried her away into the ocean. As locals searched for her body, some maintained that they saw her at the entrance of the cave, still dressed in her wedding gown. Furthermore, the cave entrance is said to have shaped in to her outline. The Little Sister acquired its name for simply being the smallest of the caves, and for its proximity to the former. Sea Surprize became known as such for the fantastic warren of subterranean passageways and orange flow stone that can only be found by kayaking deep into the cave. The Arch Cave is the largest of the seven, featuring by a tremendous twelve meter high arch. Clam’s Cave is the only one of the caves that can be visible from the mainland at Goldfish Point (the others can only be seen from the ocean), and is so called because, much like a clam, the cave is double sided and accessible from two ends.

Of particular note is the cave known as Sunny Jim, which is the only La Jolla cave that can be accessed from the mainland. One enters the sea cavern via a set of steps carved into a passage leading down from a shop known as the Cave Store. This store was founded in 1904, during the prohibition, by a German engineer and professor of philosophy called Gustav Shulz. Shulz had hired men to excavate the tunnel by hand two years earlier, before opening them to the public and charging for admission. The cave was a massive hit, with more than two hundred visitors per day at its peak. However, there was initially no staircase down the tunnel, and visitors had to go up and down to the caves by making use of a rope. The cave acquired its name when Frank Baum – author of The Wizard of Oz – compared the outline of the cave entrance to the profile of the popular British cartoon character used to advertise the Force cereal popular during the 1920s.

Today, the La Jolla Caves are protected as an Ecological Reserve, meaning that no fishing is allowed on the coast or sea. They are filled with an abundance of marine life, including lobsters, seals, dolphins, and a staggering variety of fish. This makes it a popular location for snorkelling and scuba diving. The caves can be accessed as part of guided sea kayak tours, or by land via the Cave Store.