Restored to reflect its mid-19th century appearance, the Cobblestone Farm Museum provides a view of past rural life in Washtenaw County. The original frame house on the property was built in 1835, with the cobblestone addition to the front made in 1844. The Ticknor, Booth, and Campbell pioneer families lived in the home over the course of almost 150 years, until it was sold to the City of Ann Arbor for use as a museum in 1972. The farm is home to historical programs and also hosts special events such as weddings in its restored barn space. 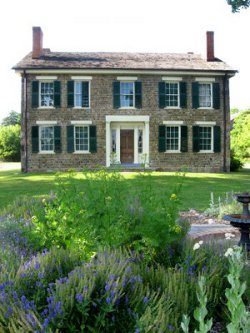 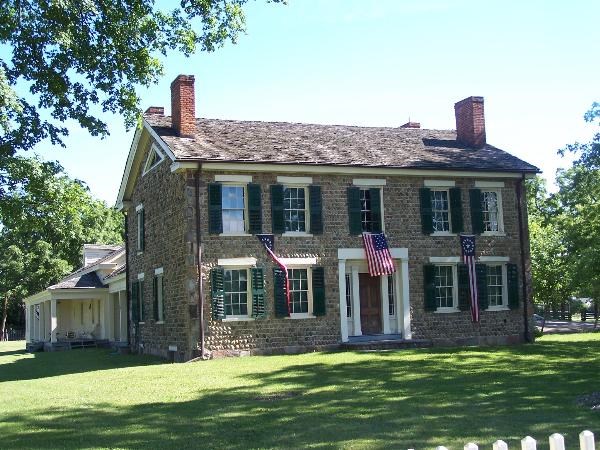 Side view of the home, showing the stone quoins 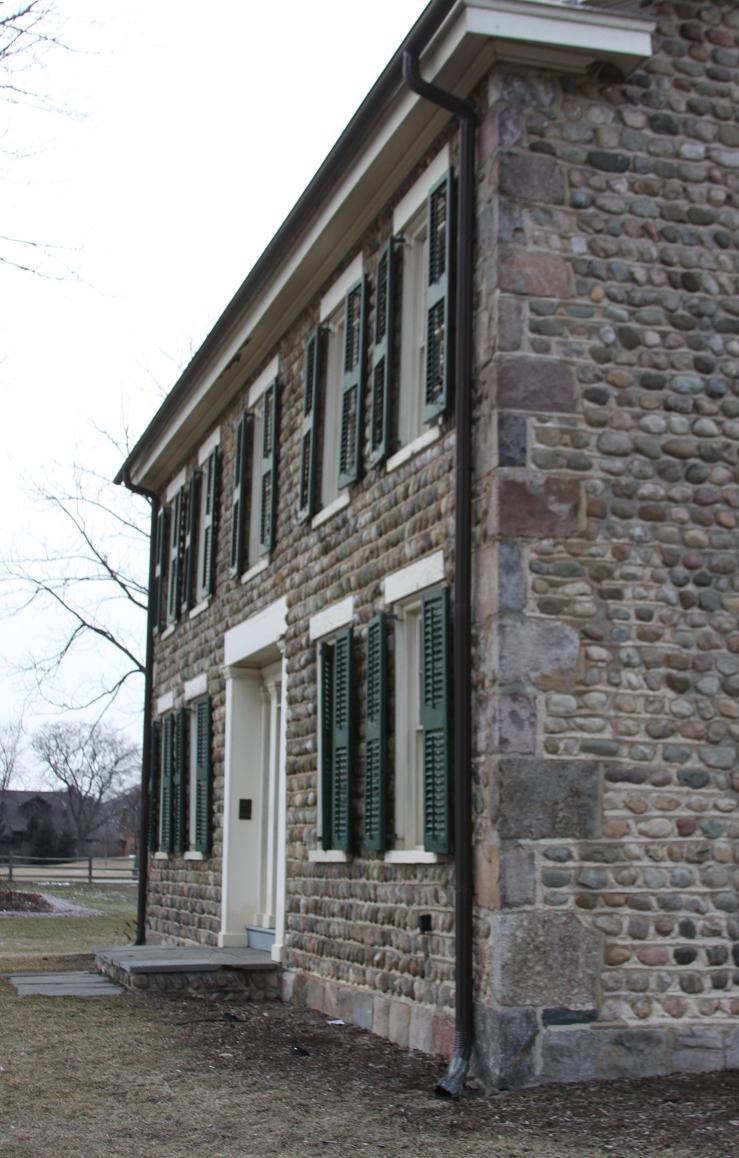 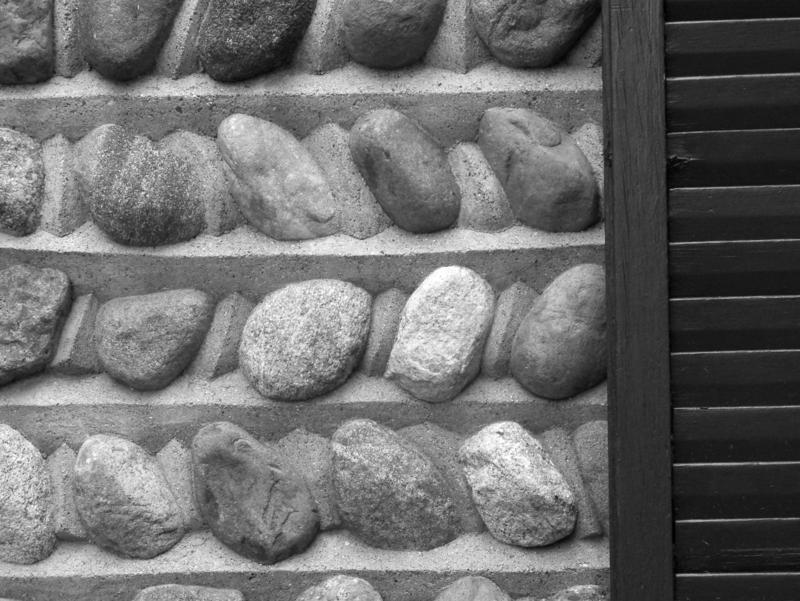 Back view, showing how the 1844 cobblestone building was added to the original 1830s frame home 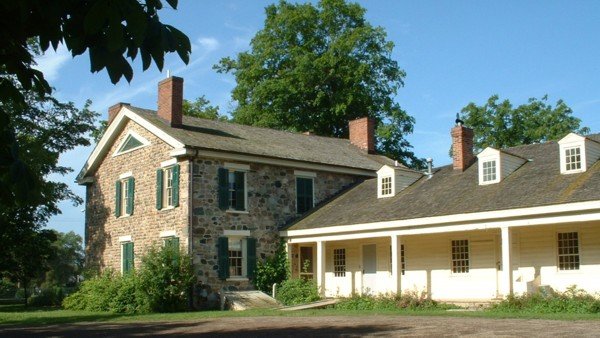 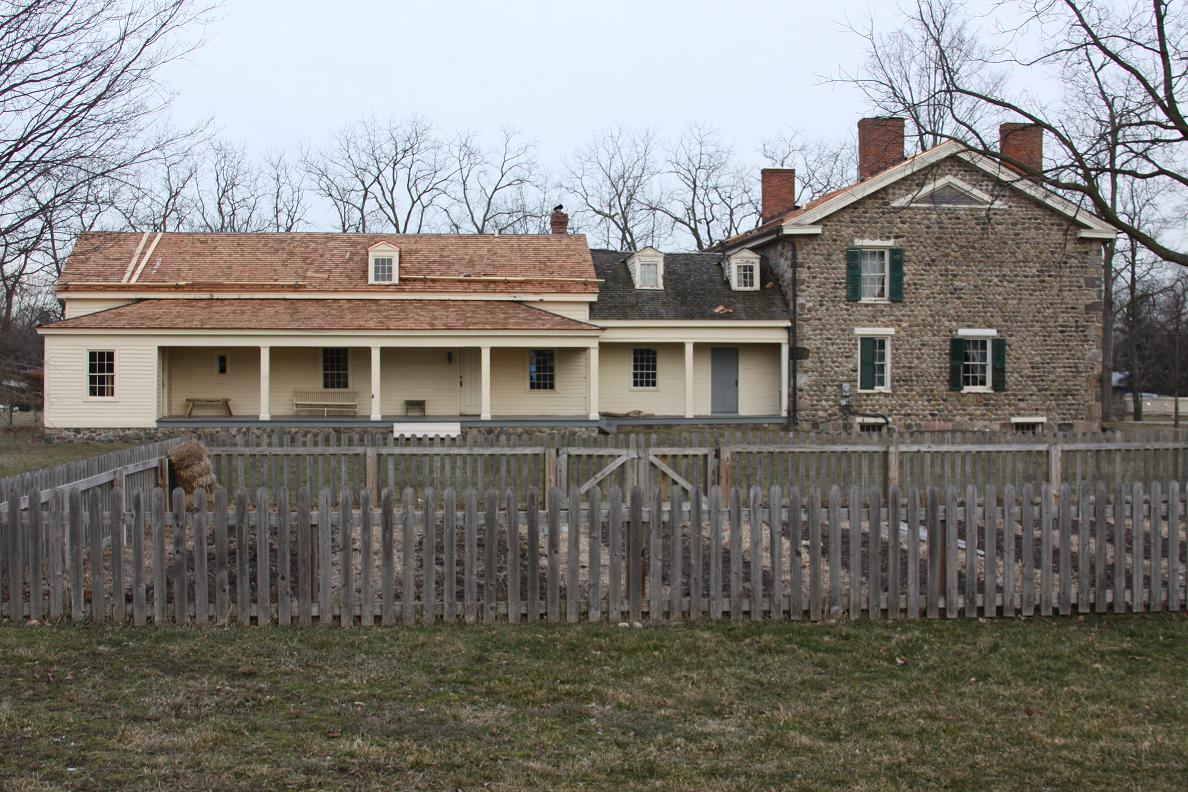 Historic furniture in the house museum 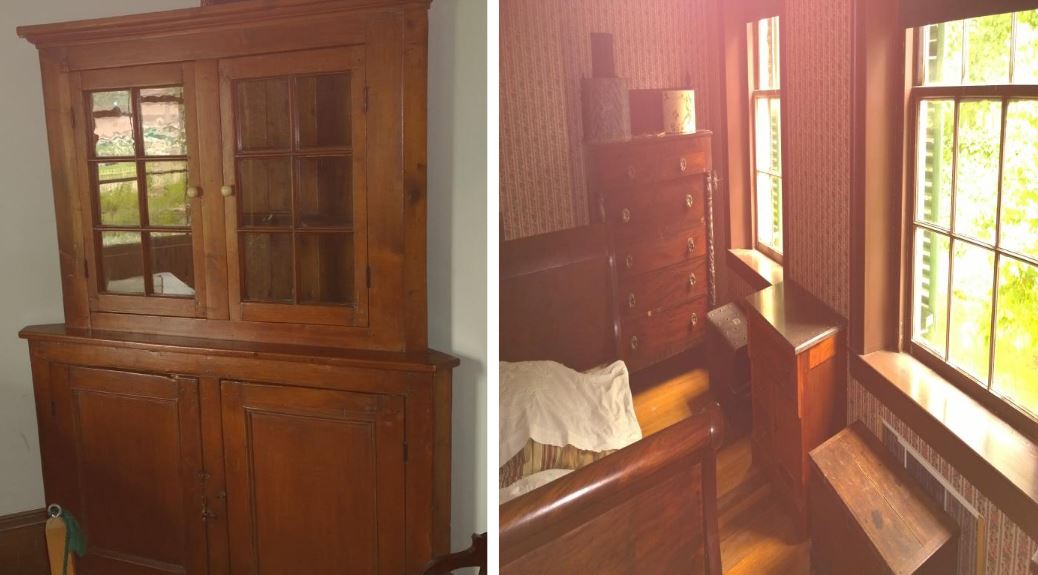 The large, 3-story barn has been renovated and is used to host weddings and other events 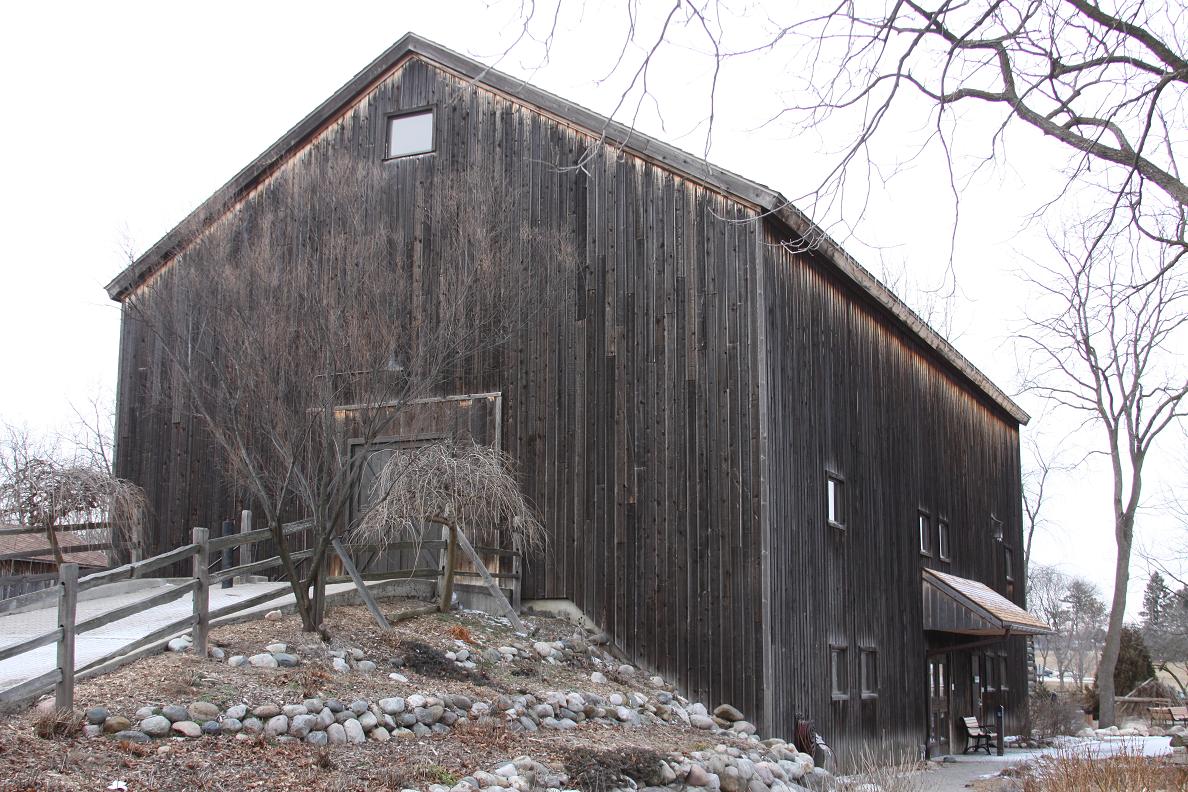 Preparations for a wedding reception to be held inside the barn 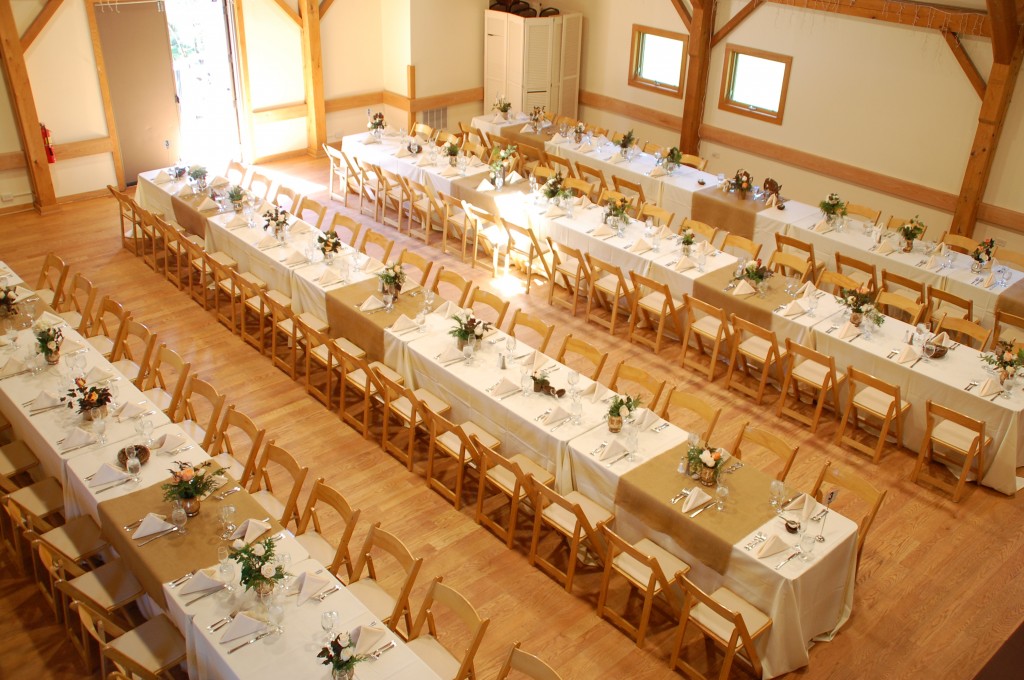 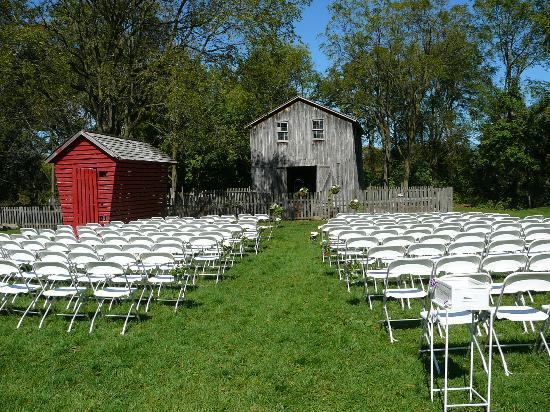 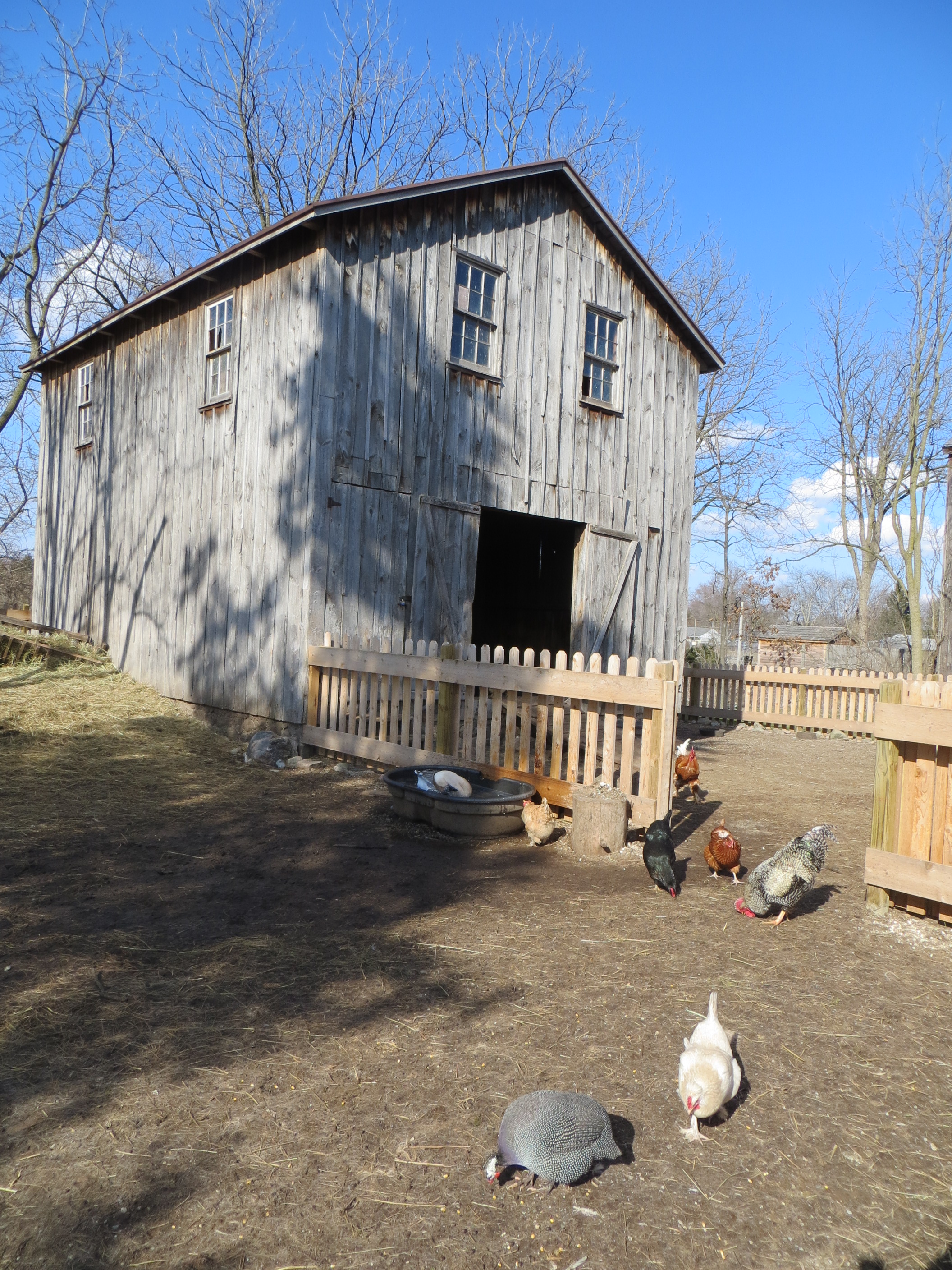 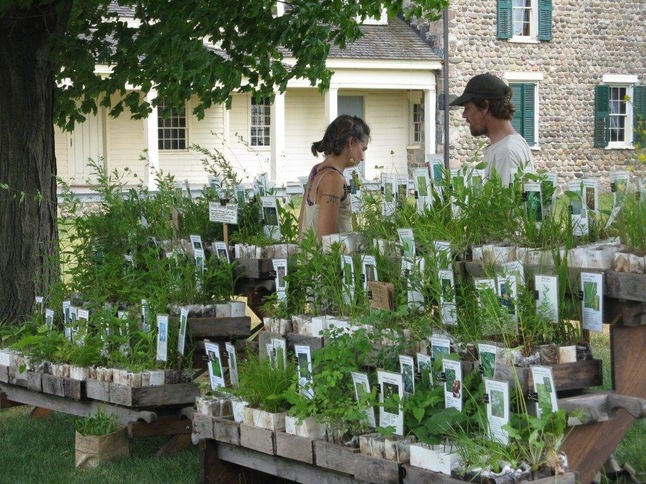 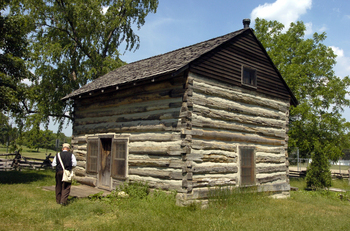 Pioneer Ezra Maynard had originally cleared the land for Cobblestone Farm as far back as 1824. He constructed a log home and then a small frame home and a barn on the property and started an orchard. Heman Ticknor was a farmer and township leader who purchased the land from Ezra for $1,500 on behalf of his brother, Dr. Benajah Ticknor. Heman’s family of nine moved into the house in 1835, and a cobblestone front addition was made to the home in 1844 by local mason Stephen Mills. Benajah and Heman’s families occasionally lived together on Cobblestone Farm between Benajah’s assignments as a surgeon with the US Navy. After his retirement in 1854, Benajah lived in the home with his family until his death in 1858. 1, 2

Benajah’s widow Getia sold the farm to Horace Booth in 1860. By 1880, the Booths had expanded the farm to 400 acres, with a nursery, orchard extension, and another barn to house Booth’s thoroughbred racing horses. The farm then changed hands again, purchased in 1881 by Scottish immigrants William and Ann Campbell. The Campbells grew crops and raised hogs, cattle, and sheep on the farm, but a fire in 1924 gutted many of the outbuildings. Pieces of the land were gradually sold over the next several decades, and some was purchased in 1955 by Joseph Buhr, who donated it to the City of Ann Arbor for use as a park. The Campbell family owned cobblestone farmhouse until 1972, leaving the home largely unchanged for almost 100 years. The property was then purchased by the City of Ann Arbor for use as a pioneer farm museum. 1, 2

The cobblestone style of the Classic Greek Revival home originates from upstate New York, where Stephen Mills and the Ticknors lived for some time. The cobbles the house are laid out in a herringbone pattern on the front, straight rows on the sides, and split stone at the rear. The Booths added a fountain and a circular drive to the front of the home. A bell on the roof called farm hands to meals. The farm museum contains artifacts, documents, and photographs of the families that lived on Cobblestone Farm over almost 150 years. This includes an 1869 letter from Horace Booth, the 1929 diary of Robert Campbell, and a well-documented collection of photos of the farm from the Campbells’ descendents. An authentic 1830s log cabin was moved to the property from Willis, Michigan in 1981, as an example of what Ezra Maynard lived in while clearing the land for the farm. 1

Today, visitors to the farm can see chickens, ducks, goats, and sheep. There is also an heirloom flower garden. Outbuildings include a barn, tool shed, corn crib, and smokehouse. The large three-story barn is used for educational activities like the Pioneer Living school program and can be rented for special events like weddings. Seasonal events are put on such as Hallow Harvest, which provides a glimpse into harvest time and winter preparation in the 19th century and Country Christmas, when the home is decorated for an 1855 Christmas with the Ticknor family. An organic farmer’s market has been hosted on the farm on Tuesdays in the summer months since 2012. 1

Thursday from 11 am to 2pm, during special events, and by request