According to tradition, a family traveling through this area buried a child named Maria de la Luz at this site. In August of 1912, the land was bought by A. Donley, AC Rodriquez, and S. Galvan to be used as a Mexican cemetery. Although the original markers, mostly wooden, have been lost over time, the site remains an important historical link for Austin's Hispanic community.

Historical marker for the cemetery 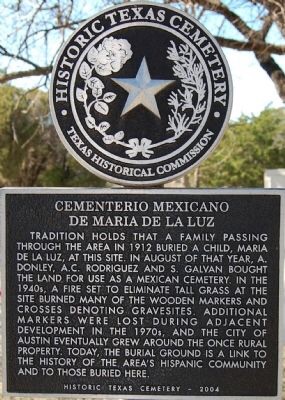 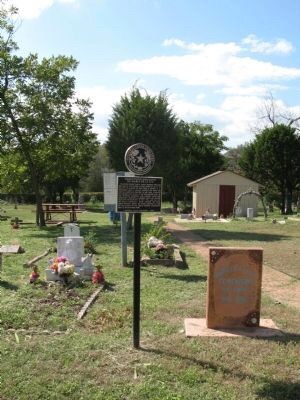 Gate to the cemetery 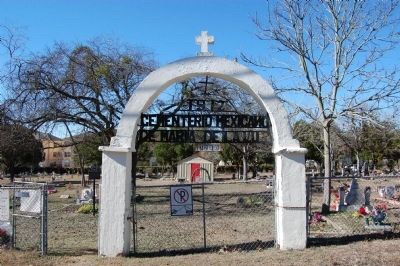 A Texas Monthly article written by Cecilia Ballí and appearing in February 2013 discusses the relative lack of visible racial minorities in Austin when compared to other major Texas cities, such as Houston. She discusses her own experiences being the only, or one of the only, ethnic minorities (she is Latina) visible in parts of town she frequents as an educated professional. At the time the article was written she was teaching at The University of Texas.
In the course of her article, Ballí posits lasting political exclusivity and geographic segregation fur the invisibility of racial minorities in the city. This political exclusivity is due in part to clinging for many years to the outdated voting model of electing city council members on an at-large basis. This means that citizens would vote for council members to represent the entire city, rather than individual neighborhoods. During the forty years previous this article being written, half of city council members and fifteen out of seventeen mayors Austin had up until this point were from four zip codes West of I-35. In 2014, a single-member-district plan went into effect, dividing the city into ten districts.
The geographic segregation is, according to Ballí, also due to political measures of the past. In 1928, a city plan to move facilities for Black residents to one area led to most African American residents living on the east side if the city. Most African Americans were living between Seventh and Twelfth Streets by 1940. The Mexican American population began moving directly south of this area.