The Contemporary Austin at Laguna Gloria

Laguna Gloria was the home of businesswoman and philanthropist Clara Driscoll. This 1916 Italianate-style villa on the shores of Lake Austin was the original home of the Austin Museum of Art and still houses some of its collections. The building is now one of two sites of The Contemporary Austin. The land that includes the property was originally owned by Stephen F. Austin, who in 1832 (seven years before Austin was founded) wrote that he wished to build a home there. This never came to pass. In 1914 the property was purchased by Hal Sevier, editor of the Austin American, with his new wife Clara Driscoll. They completed their villa two years later, inspired by a honeymoon visit to Lake Como in Italy. Clara, an avid gardener, spent many years planting native and foreign plants around the site and designing the terraced gardens that remain to this day. In 1943 Driscoll donated the homesite to be used as a city museum.

The Contemporary Austin at Laguna Gloria 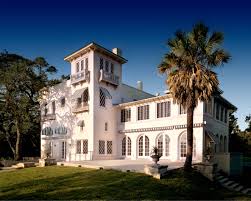 In 1961, the site was converted to the Laguna Gloria Art Museum and became an important part of the Austin arts scene. Soon after, the museum began offering art classes, and in 1983, a 5,300-square-foot facility was built specifically for the growing art school.

In 1992, the institution changed its name to the Austin Museum of Art, and four years later, moved its primary exhibition space to 823 Congress Avenue, in the heart of downtown Austin. Laguna Gloria remained the site of The Art School, and in 2003, the Driscoll Villa was renovated and again became an exhibition space, focusing on local and regional artists.

Public drop-in tours of Laguna Gloria, the Driscoll Villa, and historic gardens are held every Saturday and Sunday at 1PM.