Located in Zilker Park, the Ashford McGill House was built in the 1870s for Ashford McGill, an Austin pioneer. According to certain sources, it is located on land that the Barton family settled in the 1840s. Mary Jane Barton, Wayne Barton's widow, inherited the land and then passed it in to Dr. Barclay Townsend. One of Townsend's heirs was McGill's wife.

Historical marker for the home 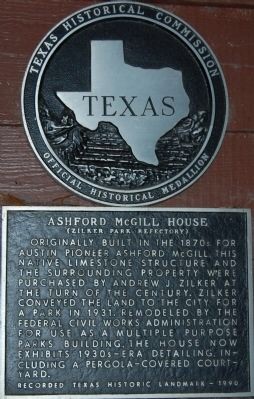 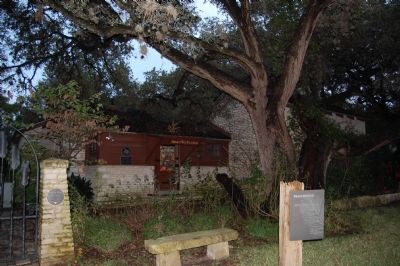 Zilker Park, where the home is located 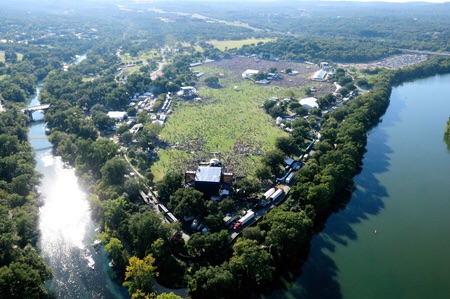 Ashford McGill served as county clerk and then as chief clerk of the General Land Office and ran cattle on his land. After nearly thirty years spent in the house, McGill died of old age in 1899. The surrounding land was purchased by Andrew Zilker in 1901 and the house fell into disrepair. Zilker donated his tract of Colorado River bottomland for a park in 1931. At this time, the Federal Civil Works Administration renovated the house and added Art Deco touches, including an oriole window. An oriole window, also known as an oriel window, is a bay window supported by brackets.
The Civil Works Administration (CWA) was created as part of the New Deal, an initiative which worked to create jobs during the Great Depression. Workers participating in jobs created by the CWA laid 12 million feet of sewer pipe, built or renovated 225,000 miles of road, 40,000 schools, 3,700 playgrounds, and nearly 1,000 airports. The CWA began on November 8, 1933 and ended on March 31, 1934, spending nearly $200 million a month and giving jobs to four million people during its duration. Due to criticism that the CWA would not have permanent value, President Franklin D. Roosevelt ended the program and replaced it with the Works Progress Administration which was valuable in the long-term as well as offering short-term benefits for the unemployed. The WPA employed people similarly to the CWA; however, an initiative within the WPA called Federal Project Number One employed musicians, artists, writers, actors, and directors in a variety of arts projects.