An important aspect of life in Austin, Texas is the robust network of public parks and playgrounds that local government has sought to emphasize and preserve throughout the city’s history. While the desegregation of Austin’s public schools was largely completed in the late 1950s, public parks and playgrounds remained segregated into the 1960s. Despite public school integration, Austin still faced challenges in integrating other critical aspects of city life, making public park and playground facilities a priority for local civil rights activists throughout the early 1960s. 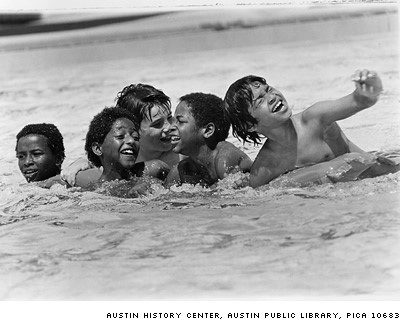 In 1960, African-American students in one of Stephen F. Austin High School’s first integrated senior classes were told that they could not attend the annual senior class picnic at Barton Springs, the iconic public swimming hole in Austin. Barton Springs, overseen by what was then called the City Recreation Department, would not sell tickets to African-Americans at the time. One of the students, Joan Means, responded by leading a wave of protests throughout the summer of 1960 where students would attempt to purchase tickets to the pool, be refused the right to buy them, and go swimming anyways.[1] These protests would become known as “swim-ins”, and they occurred on a weekly basis throughout that summer, with the group initially being accompanied by Sam Houston Clinton, Jr. a prominent Austin attorney who would later win the lawsuit to desegregate women’s dormitories at the University of Texas at Austin and be elected to the Court of Criminal Appeals. After a full summer of protest in 1960, Joan Means and the same group of students were sold tickets to the pool, marking the iconic landmark’s desegregation. Means would later say, "We had our neighborhood pool, but Barton Springs belongs to everybody in Austin. And so it was just pitiful that we were told we couldn't go to the picnic. Barton Springs sparked the integration of Austin."[2]

Even though 1960 marked the apex of the fight for equality for the use and enjoyment of natural resources, a newsletter from the Unitarian Church Newsletter dated June 21st 1959, recalls the pleasant experience that a minister and a group of African Americans enjoyed at the pool even though it was technically still segregated. The minister attempted to purchase tickets to the pool and when his African American friends stood at the edge, the man who sold the tickets offered to refund the money. However, the minister insisted that as citizens of Austin, it was their right to enjoy the public and natural facilities of the city. The parks employee agreed and the group proceeded to enjoy a day by the pool, and the minister fondly recalls that no person left the pool or expressed disagreement, quite the contrary, strangers approached the group to show sympathy and support towards the cause of integration.[3]

After Barton Springs set a precedent for public park integration, another landmark event would occur in 1963, when the City of Austin integrated all playgrounds. With a large percentage of the African-American population concentrated in East Austin, residential segregation provided additional challenges to the integration of Austin in the 1960s. When Austin adopted a comprehensive zoning plan prior to the era of desegregation, local leaders employed zoning tactics that promoted the creation of a “Negro District” that would be east of East Avenue and south of the City Cemetery, where there was already a large Black population. The creation of such a district, known as the Rosewood area, would allow for all facilities, such as parks and playgrounds, to be for African-Americans, thus preventing the need for duplicate facilities. So by the 1960s, nearly all of the African-American population lived in the Rosewood area due to greater access to public services relative to other areas in Austin.[4] Despite such prominent residential segregation, the integration of city parks and playgrounds was relatively seamless in the summer of 1963. According to a City Recreation Department report, the “inclusion of Rosewood playgrounds in all tournaments offered no problems.”[5] Moreover, African-American boys and girls were placed in city-wide athletic tournaments in the same fashion as any other child, and participation in these events was “exceptionally heavy and without incident of any type.”[6] In the face of zoning challenges, Austin’s relatively uneventful integration of playgrounds marked the substantial progress that the city had made in terms of comprehensive integration throughout the early 1960s.