This location was the site of the first office for the Rag, an influential underground press newspaper circulating in Austin, Texas from 1966-1977. Their activism and writings propelled the local anti-war, pro-Civil Rights, Women's Liberation, and countercultural movements of the sixties and seventies. It’ purpose was not only to expose elements of the government and society that people in power did not want citizens to know but to also encourage people to look for truth in the press and their lives. The Rag was the South’s first underground New Left voice and it started with a few journalists from the University of Texas' student newspaper the Daily Texan who removed themselves from the paper to advance the liberal agenda in Austin. Historian John McMillian wrote that The Rag “was a spirited, quirky, and humorous paper, whose founders pushed the New Left’s political agenda even as they embraced the counterculture’s zeal for rock music, psychedelics, and personal liberation.”

Although the building at Nueces no longer exists, The Rag made a lasting impact on the culture of Austin and underground press across the country. 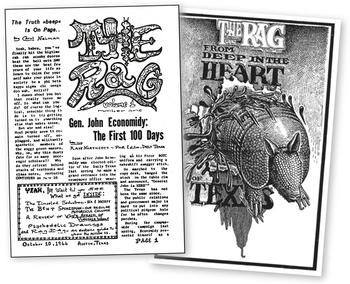 The Rag was established by Carol Neiman and Thorne Dreyer. Dreyer had previously been involved in the Students for Democratic Society group. Carol Neiman was arrested shortly after starting the paper for participating in a protest at a gas station in Austin that opposed the owner’s denial of sale to individuals of color or counterculture.

Becoming increasingly disillusioned with the true purpose of SDS, Dreyer dropped out of the University of Texas and became a part of Austin's art and literary community.  Dreyer and other friends, such as Carol Neiman and Jeff Shero, felt the need to create their own press apart from The Daily Texan and other university-controlled publications. This resulted in the formation of The Rag.

Initially, writers at the paper focused primarily on imparting the importance of civil rights and women’s liberation to a predominantly white audience. Members of the newspaper agreed that they would not advertise as an objective newspaper, and certainly not encourage people to read the paper as the sole source of political and cultural information, but that they would put their “biases up front," so as not to hide it, as more widely known, corporate publications did.  Publications like The Daily Texan were not upfront about their political stance but also were reluctant to cover issues that disagreed with their political stance. On the other hand, The Rag’s writers chose to write about issues and topics of which they were involved, so they were inherently subjective.

The Rag exposed elements of the counterculture with its “sex, drugs and rock n roll” vibe. The Rag set out to deliver another side to the increasingly biased and corporately controlled news sources; the University of Texas did not respond agreeably. University president Frank Erwin attempted to ban The Rag from being sold on campus, but disgruntled students protested. The leaders of SDS and The Rag attempted to hold a meeting on campus, despite the university administration denied their request. They held the meeting despite the administration’s best efforts and were suspended, thus setting off the Free Speech Movement.

Student activists became enraged at the denial of freedom of speech at the university and held a three-week protest on campus, much to the administration’s chagrin. In 1967, the headquarters of The Rag were located at 2506 Nueces. This was not only where the writers held meetings, wrote and produced the paper, but also a haven for those students or non-student activists who had little to no income, while also receiving criticism and lacking support from their parents in their political and social endeavors.  Also during this time, the anti-war movement exploded in response to the constant news coverage of the war and death count of both American and Vietnamese people in Vietnam, propelling The Rag to make the movement a priority.

The influence of The Rag cannot be measured in numbers of copies or even years it was published.  It provided Austinites a proper chance to know about and participate in the rallies and marches in order to change the system at a grassroots level. Harvey Stone, who was a Rag staffer said in an interview, “We not only wrote about the news, but we were making the news. We would organize a demonstration, we would be at the demonstration, and we’d come back and write about the demonstration.” Rag staffers were the New Left counterculture in reality and provided them with a voice.

The Rag was an amazing resource to the liberal side of Austin.  Not only did it provide them with the information they wanted, it provided them with the comfort that they were not alone in their thinking.  It showed that there were groups of people who believed there are better ways to govern and to live. “…by championing New Left values, challenging local officials and the mainstream media with bravado, and blossoming into the most visible representation of Austin’s oppositional culture, the Rag…put down roots in a community that came to regard it as a beautiful and precious thing.”

Not only did The Rag provide the counterculture of Austin with the information and voice they needed for great change, but it also provided an excellent example of what can get done with the system they wanted to put in place.  Abe Peck wrote, “The Rag was the first independent undergrounder to represent…the participatory democracy, community organizing and synthesis of politics and culture that the New Left of the mid-sixties was trying to develop.”  Leading by example proved to be the method of a truly successful underground press.  Because you can’t get anything done without turning heads and being a pain for somebody important... The Daily Texan looked back on The Rag as “a firebrand little troublemaker” that was “a seminal influence in the national underground press movement.”