This historic grist mill continues to operate much as it did during the 19th century. Built between 1810 and 1820, the mill operated until the 1930s. The mill integrated revolutionary technology created by Oliver Evans. This technology allowed for the grinding process to be a single, continuous flow. Eventually the Fairfax County Park Authority purchased the property and restored the mill's machinery, including a massive waterwheel, wooden gears, and grinding stones. Guests can tour the mill and watch it grind wheat flour and cornmeal as they learn its history. Visitors of the Mill can learn about the history of the building, grinding technology, or purchase meal available in the gift shop.

Colvin Mill is a Virginia Landmark listed on the National Register of Historic Places. (Unknown source) 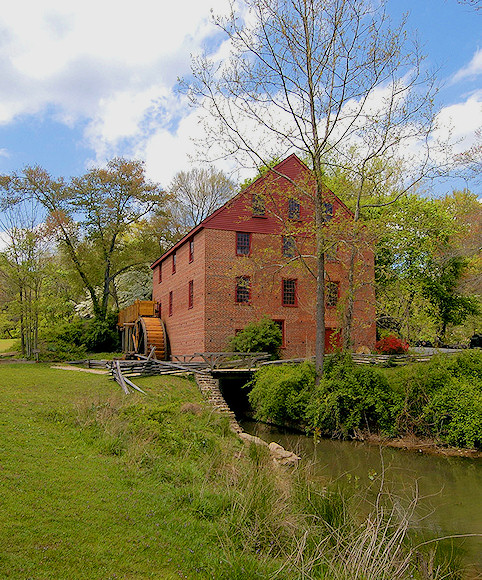 These wooden stones grind corn and wheat just as they did in the 19th century. Fairfax County Park Authority archived web page (reproduced under Fair Use). 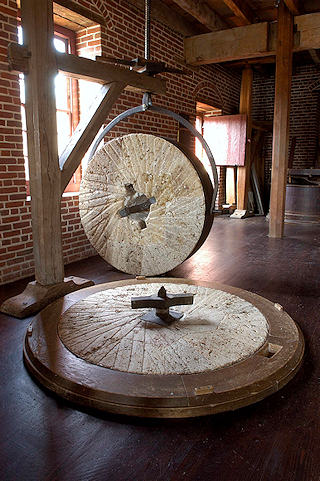 The mill's machinery was innovative for its time. In 1795, Oliver Evans created a technology that would allow mill production to be a single process. This innovation meant less labor was needed and the mill would be able to produce more product. In the Colvin Mill there are four machines that are able to move the grain through a continuous grinding and sifting process. A 20-foot water wheel powers the process. Sixty buckets extend around the perimeter of the wheel. The weight of the buckets forces the wheel to move in a clockwise motion. By creating a single force, it is easier to harness the power generated by the wheel. The nine-foot cog pit and gears transport the power generated throughout the rest of the mill. The pit and gears push the grinding wheel, and the hopper boy sifts the grain into the finished product.

During the Civil War, 5,000 Union troops under Brigadier General Edward O.C. Ord remained at the Mill to protect the rear and prevent the 3rd Brigade of Pennsylvania Reserves from being cut off from their base at Langley. The Battle of Dranesville, which pitted General Ord's forces against those of Confederate General J.E.B. Stuart, resulted in a Union victory.

In 1965 the Fairfax County Park Authority acquired the mill and its property, and began an extensive restoration project. The county established a historic district in 1972 to protect the mill and the surrounding area. The mill was listed on the National Register of Historic Places in 1977.

Today, the Mill continues to function, but is also used as a museum. Within the mill, visitors will learn about the difference in technology and how the advancements effected the economy of Virginia. The museum frequently holds special exhibits and events that preserve the history of other food-based technological advancements. The property includes a gift shop, the "General Store," where visitors are able to buy some of the products they see produced in the Mill, as well as "penny" candy, toys, books, snacks, and beverages.

The grounds outside the mill offer scenic wooded and landscaped grounds, where guests are invited to picnic and hike the nature, Cross Country, and Rails to River trails. From February to December, special programs featuring live music, craft demonstrations, ice cream making, seasonal activities, and summer camp are also available.