The Main Mall and Free Speech at UT Austin

This location is where many anti-war protests were held during the Vietnam era. Today the location has been designated a free speech area where individuals have voiced their opinions since. The late 1960s are characterized as a turning point in our culture when widespread rebellion against conformity began. By the mid-1960s, protests were deemed effective due to the progress made by activists in the civil rights movement. The growing suspicion towards the federal government over the draft and involvement in Vietnam drove many young Americans to rebel, demonstrating their power during the late 1960s and early 1970s by creating a culture of dissent towards the Austin area establishment.

These steps leading up to the Main Building are sometimes referred to as the "free speech steps" owing to the long history of student protest that began here in the 1960s. 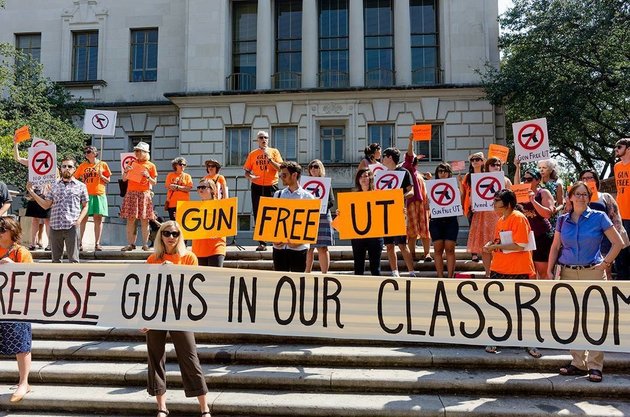 With the uncertainty of military involvement escalating in Vietnam, the commonality of protests did too. By September 1965, minor protests had begun on the UT campus by Students for a Democratic Society near a model Air Force jet displayed outside the ROTC building. The intent of SDS was to expose the purpose and reality of the US war machine. The protest consisted of a few students on rotating shifts picketing for two days. SDS Chairman Gary Thiher was quoted in Daily Texan as saying “SDS decided Sunday night to picket the jet as a “symbol” of all military budgets, airplanes, ROTC programs for the purpose of destroying human flesh.”[1] The minor protest failed to have a significant impact on swaying students to oppose the Vietnam War, but the coverage of the first major SDS protest by the Daily Texan upset UT Regent Frank Erwin. In October of 1965, SDS presented their opposition towards US policy in Vietnam by organizing nearly 70 students to march and protest.[2] The protests soon sparked division among the campus. Afterwards, Erwin criticized leftists and how the Daily Texan attacked US policy efforts and threatened to abolish the editorial page of the newspaper.[3]Despite being reprimanded by a top university official, the size, tensions and frequency of leftist protests continued to grow, establishing tension between the anti-war movement and the campus community.

The pinnacle of protests on the UT Campus were in the later part of the 1970 spring semester. To express their general sentiments towards the war in Vietnam, several hundred leftists taunted Army ROTC cadets during their annual Federal inspection with water guns and by shouting Native American war cries. Yippie leader John Lane expressed the objective of the protest he helped organize in a Daily Texan article. “The first thing was to have fun but as long as ROTC is around as a tool to kill people, there will be protests.[4] The protest was eventually stopped by campus security and officials from the Dean of Student’s office. The protest served as a fair warning of the power that leftists could wage on campus.The US invasion of Cambodia on April 30 and the Kent State riots on May 4 elicited many responses; the underground newspaper the Rag attacked the graduates of the ROTC program, teach movements were conducted, and nearly 25,000 leftists organized near the tower to march onto the State Capitol [5]. The protests in early May proved to be the most influential in the university’s history and were also a time of apprehension for those who supported the war “..and for a brief time, leftists had some hope that the majority of UT students were being radicalized.”[6] The effects of the lasting protests in May of 1970 shaped the future of the university. Today the planters located in the West Mall are a tactic used by the administration to deter large masses of people from rallying in the same fashion. Additionally, the steps off the West Mall have since been designated a "Free Speech Area" is frequently used for various protests.[7]

The strategies used by leftists against the war in Vietnam may not have had a pivotal effect on the federal government's decisions, yet they did shape the culture at the University. The use of journalism through the Rag and the power of assembly students witnessed proved to be significant in how students have voiced their opinion since.