Prior to the 1960s, Black students were barred from University housing, athletics, and many extracurricular activities such as clubs and the band. Black students led a protest against their exclusion at a March 1960 Board of Governors Meeting. The month prior, the historic sit-ins in North Carolina that led to the founding of SNCC took place and led to sit-ins throughout the South. UT students were already protesting segregation at restaurants and other establishments on Guadalupe Street and by the spring of 1960, UT students were also holding sit-ins. UT students then initiated a new strategy at movie theaters called a "stand-in." 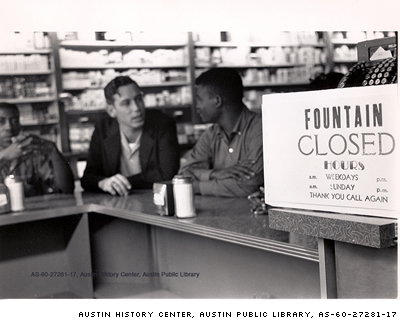 African Americans in Austin had challenged segregation well before 1960. For example, Myrtle Washington was arrested for refusing to move to the rear of an Austin Transit Company bus in 1953. She was represented by Arthur Dewitty and the Austin Chapter of the National Association for the Advancement of Colored People (NAACP) who used her arrest to challenge the legality of Austin's segregation law. Although her case failed to end segregation, it inspired additional protests that led to the gradual elimination of Jim Crow laws in Austin and Texas during the 1960s.
One tactic used by University of Texas students was known as a "stand-in." The stand-ins consisted of patrons standing in line at theaters that drew the color line. When participants reached the front of the line, they approached the ticket booth with money and asked whether the theater had reconsidered its Jim Crow policies that required African Americans to sit in a segregated section. After being informed that the theater had not changed its policy, they moved to the back of the line and waited for their next turn to ask if the policy had changed. The "stand-ins" were effective in limiting the number of tickets that could be sold until the police broke up the demonstrations or escorted white patrons who approved of segregation inside to purchase tickets in the lobby.
These restaurants depended upon the University and were such a popular place with white UT students that the area was known as "The Drag" given the prevalence of cruising. White and Black students at UT formed a new organization to help coordinate their activities, Students for Direct Action, in the fall of 1960. SDA also worked with the Austin branch of SNCC and other progressive organizations. The partnerships were essential as white supremacists began using violence at this precise moment. For example, opponents of racial integration exploded a bomb inside the YMCA intended to kill or intimidate the members of SDA and SNCC that were holding a protest of the Y's refusal to admit African Americans.