Opening on August 7, 1970 inside an abandoned National Guard armory on the corner of Barton Springs and South First Street, Armadillo World Headquarters took over the Austin music scene. Hosting thousands of concerts and giving many bands and musicians their start, this venue developed a sound and atmosphere that helped establish Austin as the Live Music Capital of the World.

The Armadillo World Headquarters (behind the Skating Rink) in 1976. Photo:Steve Hopson Photography, stevehopson.com. 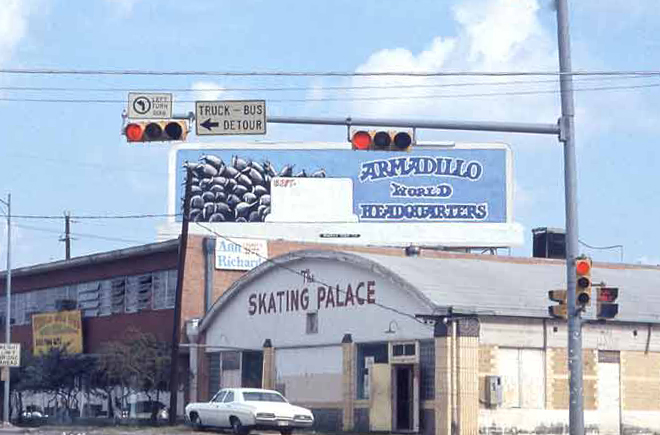 In the summer of 1970, Austin’s beloved music venue Vulcan Gas Company closed down, creating a void in the counterculture music scene. Eddie Wilson, manager for the famous Austin group Shiva’s Headband, sought a new local club for his small rock bands to play at. After stepping out during a Shiva set at The Cactus Club, Wilson saw an old abandoned building and instantly found it to be the perfect place to fill the empty void left by The Vulcan. He managed to raise $4000 by combining personal money with Spencer Perskin and some additional financial backing from a Capitol Records contract to refurbish the venue and rent the 30,000 square foot armory for a mere $500 a month. The name Armadillo World Headquarters originated with collaborator Jim Franklin. "He took the armadillo, a bumbling night creature, and made it a symbol of the counter culture in Texas.” The name was chosen because the armadillo was seen as a symbol for hippies because of its peaceable nature and its tendency to fall victim to high-speed technology.

Concerts were performed in a wide-open room with a concrete floor, folding chairs, high windows, a tin roof and a capacity to hold 1,500 people. Artist Jim Franklin, whose prolific art style began behind the Vulcan Gas Company posters, joined the AWHQ team along with a few other well-known artists. Eventually murals adorned every wall with famous singers, one of which was Freddie King playing the guitar with an Armadillo jumping out of his chest from where his heart would have been. Offices doubling as bedrooms for staff could be found in the front rooms. In 1972, Hank Alrich helped fund the construction of a beer garden outside, hoping to draw a wider crowd and to create a better and more authentic feel. The small kitchen sold food and was most famous for its nachos and cookie nubbins. Mike Hassett, a former student at the University of Texas, was a regular at Armadillo World Headquarters. He commented on the wide variety of musicians that came through, the cheapness of the concerts, and the overwhelming size of nacho portions.

Staff at the AWHQ used many creative tactics when attempting to stay afloat. These included the distribution of hundreds of colorful, flashy posters around Austin, the use of the Headquarters as a recording studio, and broadening the variety of musicians who performed, including Earl Ruston’s Rock Opera as well as Apollo Production classical music. There was no air conditioning or heating within the building, which proved to be one of AWHQ’s biggest problems. After a rocky start, the Armadillo was gaining national recognition and therefore booking bigger names, but not enough people were attending these high profile concerts during poor weather. Despite efforts to alleviate the problem, summer and winter attendance continued to plummet throughout the decade, dragging the Armadillo's revenue with it. A new economic recession played a major factor as well. Many supporters could no longer spare the extra expense of attending a concert, typically seen as a luxury.

Inevitably the communal utopia in Austin came to an end just as the Haight Ashbury rose and fell in the Summer of Love. As the eighties began so did the Austin land boom, causing the land on which the Armadillo sat to become “worth more in dollars than in nostalgia.” Thus when the lease expired in 1979, the landlord decided not to renew with Armadillo World Headquarters and instead sold the land to a corporation in favor of building a sky rise.

Despite being open for merely a decade, the impact of the Armadillo World Headquarters on Austin was significant. It created a new type of sound referred to as Progressive Country or Redneck Rock, which combined two cultures that had previously opposed to each other. The Armadillo World Headquarters paved the way for Austin City Limits and was at the forefront of Austin's music scene, helping it become the Live Music Capital of the World.

Statten, Henry. “Armadillo World Head Quarters” Whither the Armadillo? And Where From? Craig Hattersley Dec 26 1980.