This historic marker commemorates one of the last train robberies in the United States. On June 7, 1904, Harvey Logan (known as Kid Curry) boarded the westbound train on the Denver and Rio Grande line as it entered the station at Parachute. Logan produced his revolver and ordered the engineer to take the train three miles west where two other conspirators were waiting with dynamite. The men expected to use the dynamite to break into the train's safe and capture a quantity of gold. However, it is likely that the train's safe did not hold the expected load. After breaking into the safe and stealing whatever it might have contained, the crew escaped and evaded lawmen over a long chase on horseback for two days, until they were eventually cornered. Logan perished after a prolonged gunfight and was buried near the site of Doc Holliday's grave in Glenwwod Springs. The other two robbers escaped.

This historical marker is titled "Robbery & The Getaway" and can be found alongside the highway. 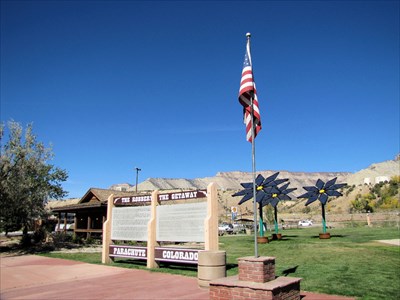