The David Stott Building opened on June 17, 1929, one of the last great skyscrapers built in Detroit during the Roaring Twenties before the stock market crash and the Great Depression. It was named after David Stott, an Englishman who had created a large fortune in flour milling and real estate speculation. Designed by the architectural firm of Donaldson & Meier, the Art Deco building is 38 stories high with a brick, granite, limestone, marble, and terra cotta exterior. It has artistic tiered setbacks at the top and features stone carving by sculptor Corrado Parducci. The building has suffered from low-vacancy and flooding in recent years, but was purchased by Dan Gilbert in 2015 with plans to renovate into a mixed-use development. 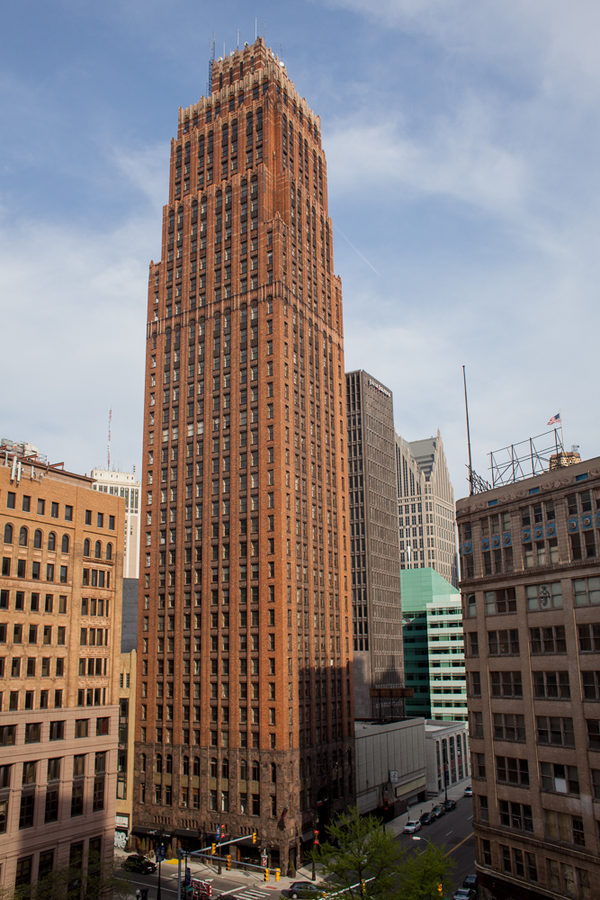 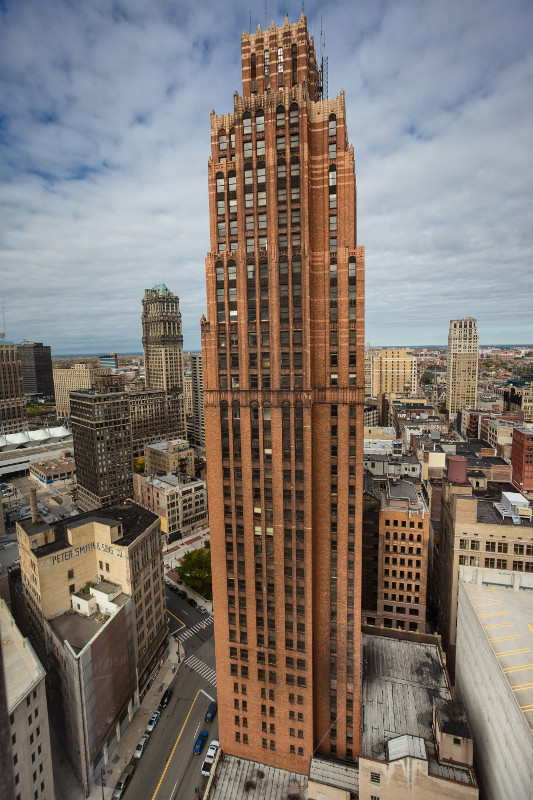 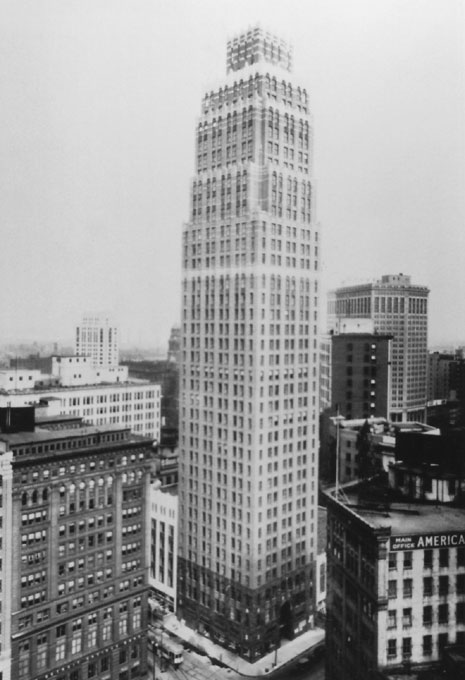 A close-up of the tired setbacks at the top 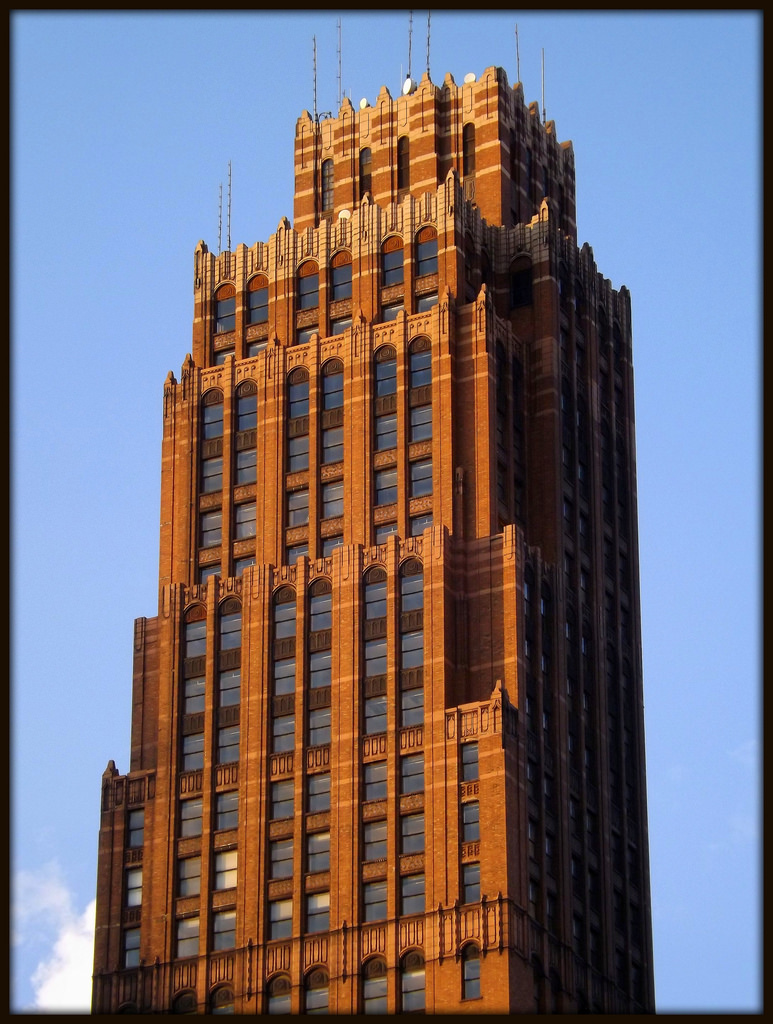 The entrance of the building 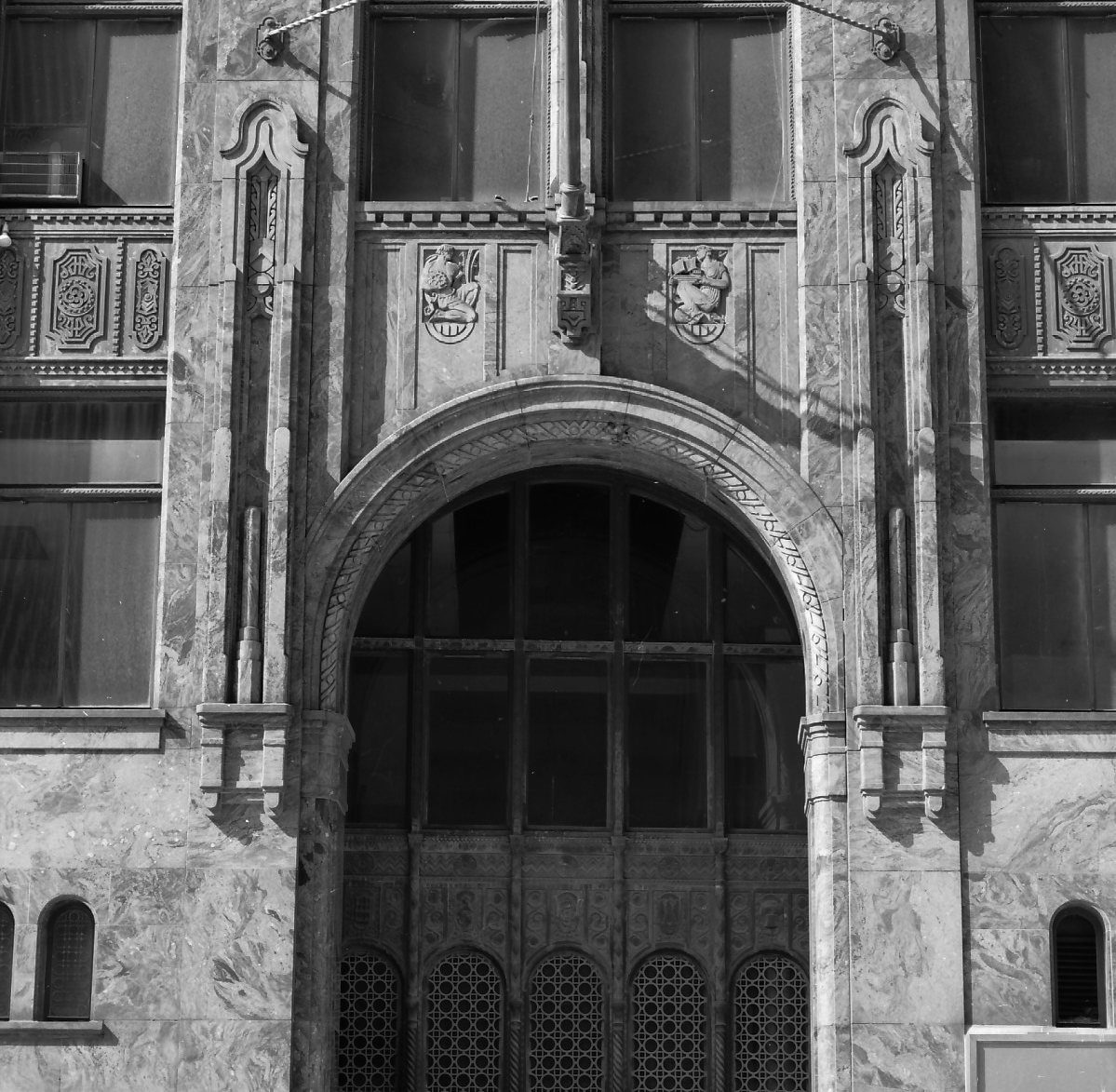 Swinging doors in the lobby 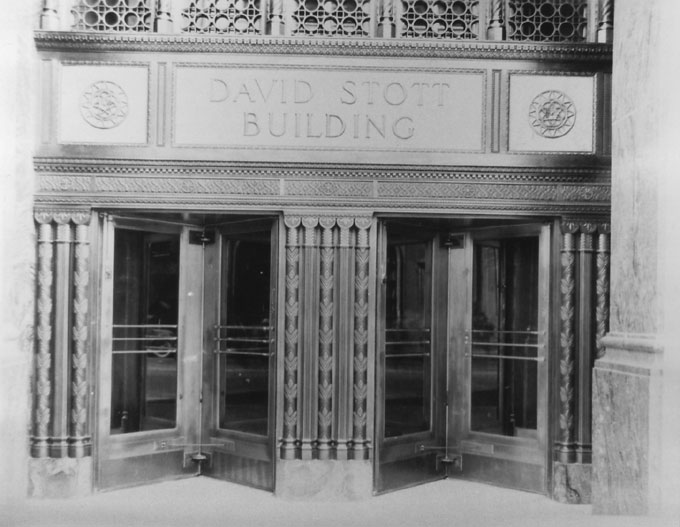 The six elevators, very impressive for a building constructed in 1929 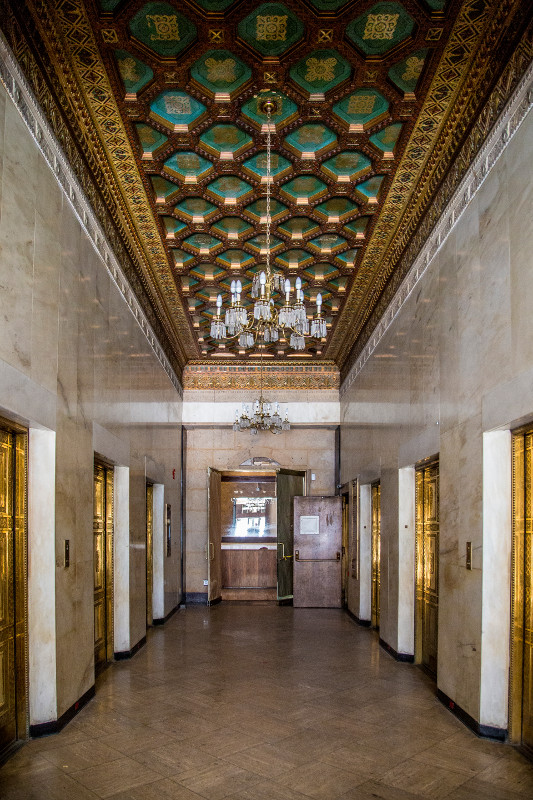 A view of the lobby 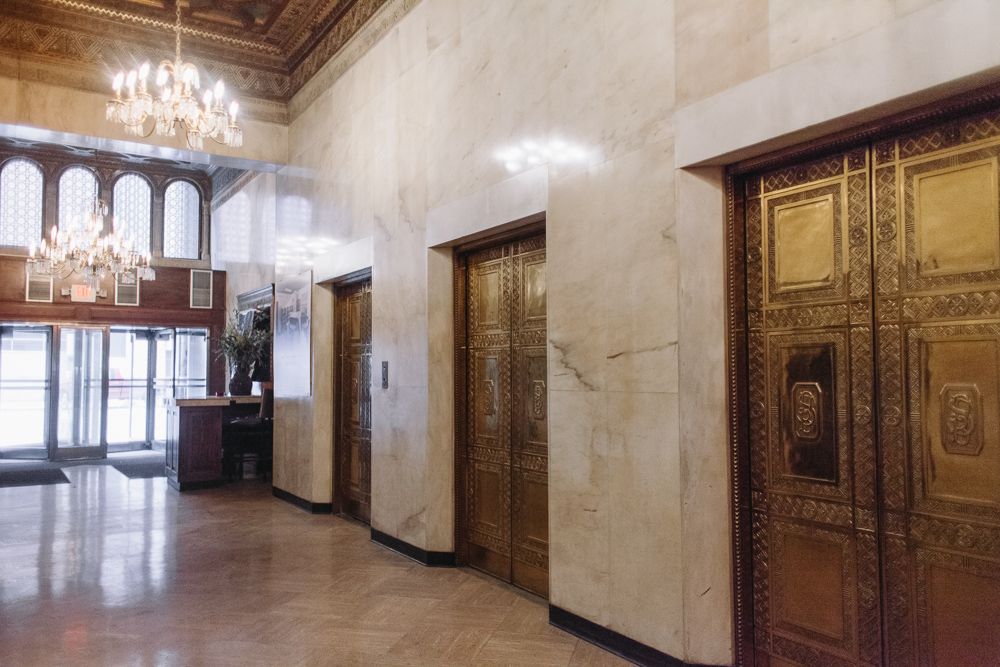 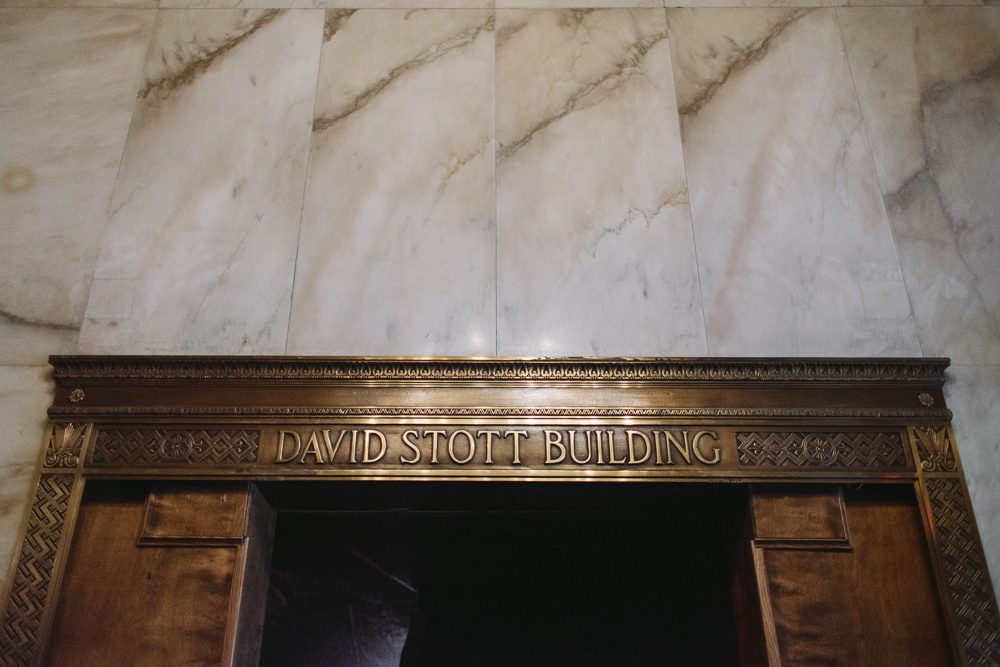 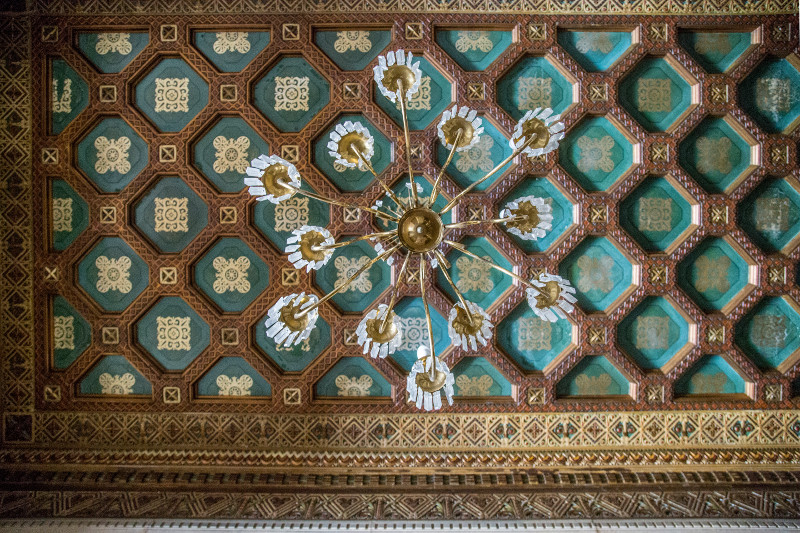 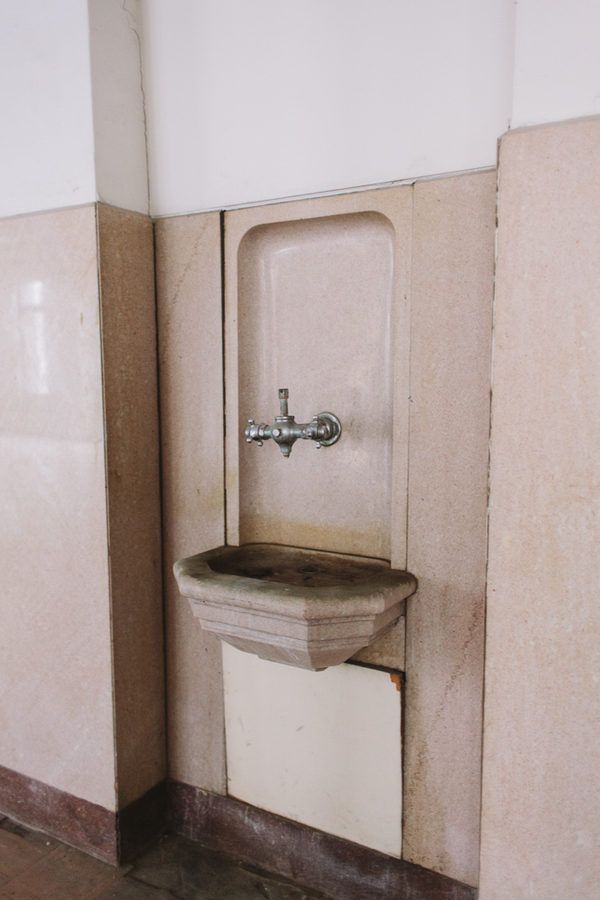 A view of one of the top floors before renovation 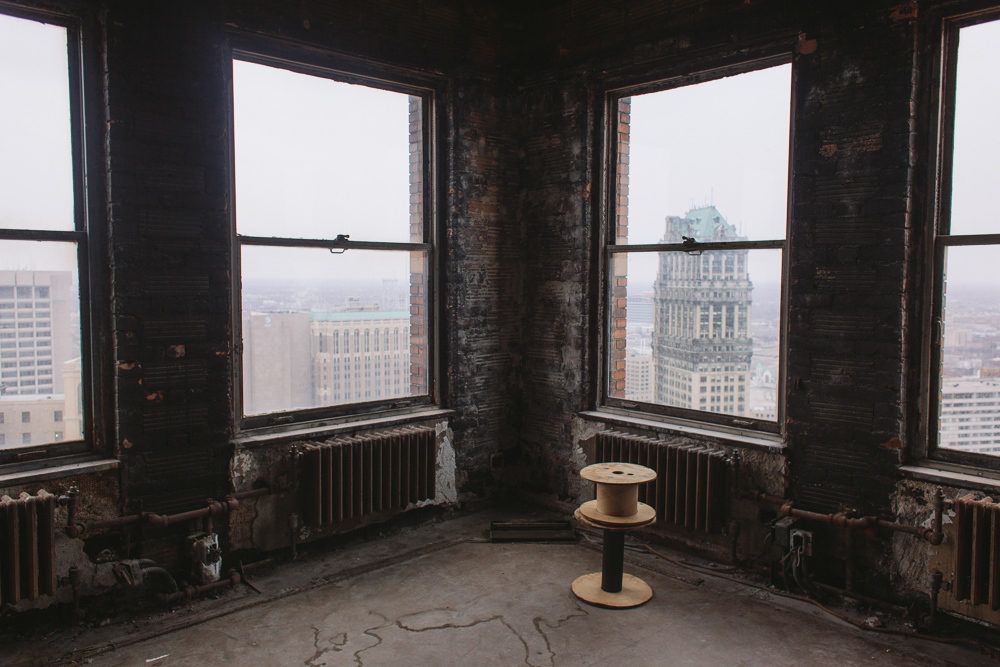 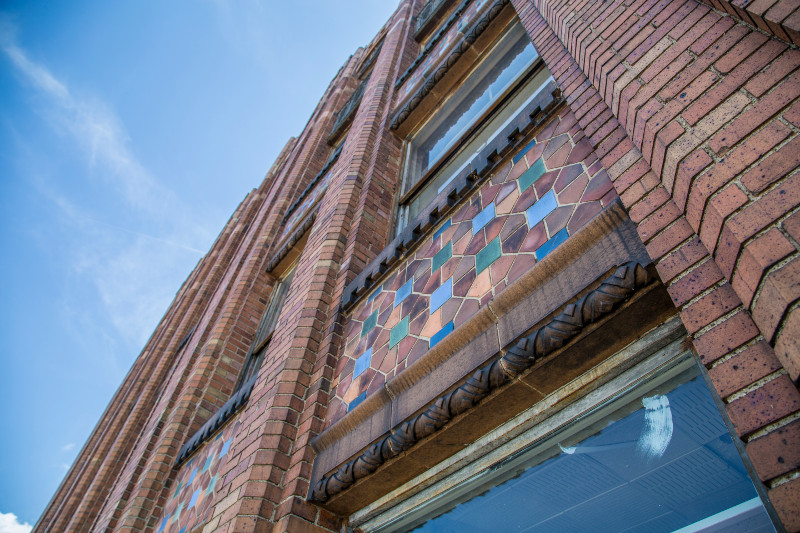 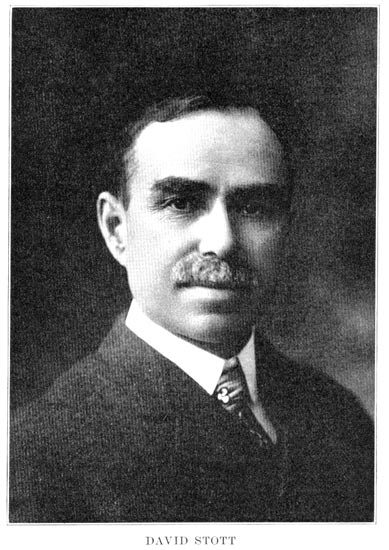 David Stott was born in England in 1853 and moved with his family to Detroit as a teenager. He started in flour milling at a young age and eventually became president of his own company, the David Stott Flour Mills. Between the milling company and several other ventures, including a realty company, he became very wealthy. The Stott Realty Company would build the skyscraper that bears his name in 1929.1 Architects John Donaldson and Walter Meier were commissioned with the work and may have gotten their inspiration from the Chicago Tribune Tower. The design could also have been influenced by German Expressionism, both because this was a popular style in the 1920s and because Donaldson had studied architecture for a time in Germany.1 The diamonds and zig-zags on the columnns and the window grilles above are a mix of Classical Greek and Art Deco.2

The David Stott Building is 38 stories and 436 feet high with 204,000 square feet.2 It was the fourth-tallest building in Detroit when it was built.3 At the twenty-third floor, there are tiered setbacks going the rest of the way up.2 The exterior is tan-orange brick, red granite, marble, limestone, and terra-cotta.1 It features stone work by famous sculptor Corrado Parducci. In The American Skyscraper, 1850-1940: A Celebration of Height, Joseph Korom says the following about the David Stott Building’s expert design: “The masterful handling of the building’s various components, its pleats and retreats inward, is nothing short of masterful. The skyscraper’s strong vertical lines are not visually ‘fractured’ at setback levels, but rather, they join the vertical thrust quickly and adeptly on the next. These brick piers rise unbroken from top to bottom—the ultimate vertical rise, a rise without one dissenting line, a thing of beauty.”1 Inside, the David Stott Building had an impressive six elevators that could speed to the top floors in less than 30 seconds.3

Because the building opened in June of 1929, it was one of the last great skyscrapers built in Detroit before other construction was stalled with the Great Depression. It cost $3.5 million to build, but was sold only the next year for $1.3 million. The building was able to gain some tenants over the years, but it was never fully occupied and always seemed to be just “hanging on.”3 In February 2015, a pipe burst due to record low temperatures, filling the bottom two floors with millions of gallons of water.4 Despite this, the building was sold just a few months later to Dan Gilbert, owner of Quicken Loans, for $15 million. Gilbert has put billions into saving and renovating various structures around Detroit in recent years.5