Designated a National Historic Landmark and placed on the National Register of Historic Places in 1986, the 277 acre Fair Park is a truly unique place in the country. It features the world's largest concentration of art deco buildings, most of which were built for the 1936 Texas Centennial Exposition. As such, it is the only world's fair site before the 1950s to remain intact. The exposition was a great success and attracted six million people. Today the park features several museums and attractions, such as the African American Museum of Dallas and the Perot Museum of Nature and Science at Fair Park, the Texas Discovery Gardens, the Children's Aquarium at Fair Park, the Cotton Bowl, and the largest ferris wheel in North America. There is also a lagoon which features swan boats. Sporting and cultural events, exhibitions, and various kinds of entertainment events are held at the park throughout the year.

View of the park at dusk 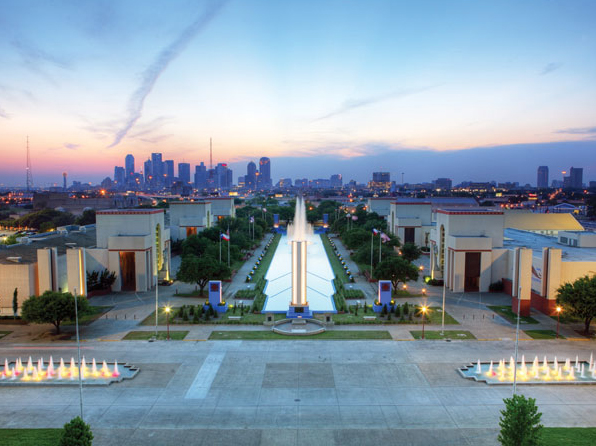 One of the many art deco buildings at the park

Before 1936, the park had been the location for Texas state fairs since 1886 so it was natural for the exposition to be held there. Over time many of the buildings and grounds were not well maintained. As a result, after many years of raising the necessary funding, the park underwent a large renovation project to not only restore buildings but to also establish new uses for the park other than the annual state fair. These efforts continue today.