The Dallas Museum Of Art houses 23,000 works of art from all over the world that span 5,000 years of human history. The museum was founded by the Dallas Art Association in April of 1909 which had previously formed a gallery in the public library. The Dallas Museum of Art encourages creativity and focuses on the positive aspects art can have on individuals' lives. This museum also offers many programs for people of all ages and includes many activities for those with special needs.

The Dallas Museum of Art was founded in 1919. This sculpture stands on the museum grounds. 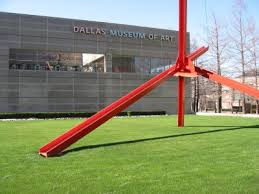 One of the exhibit galleries in the museum 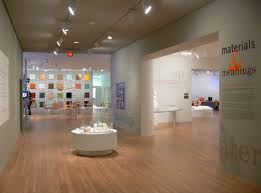 The Community of Dallas, Texas thought it was necessary to form a larger art organization; and thus came the idea of the Dallas Art Association; which was founded by fifty citizens on Monday, January 19, 1903. An artist, Frank Reaugh suggested that an art gallery be placed in the Public Library, and it was done. This gallery was well liked by an investor, Mr. J.S. Armstrong. Armstrong wanted to see it flourish more so he offered to donate half of the amount of money that was raised for the gallery and because of his donation; the Art Committee of the Dallas Public Library was established in 1903. The members of this committee immediately began fundraising in order to purchase artworks that were considered to be of outstanding value; that could be displayed in the gallery. They managed to gather valuable works of art and formed what was thought to be the best collection in that area during this time period.

Soon after the Association was created, they received two checks which totaled to the amount of one thousand and five hundred dollars, with a promise that the same amount of money would be donated the following year. Those funds enabled the Association to purchase several additional pieces of art. The Association was supported by many people who donated membership fees of five dollars each year. The members received an annual exhibition of pictures and a lecture by a recognized art expert. Also, the Association occasionally held social functions in honor of artists or notable guests.

The art gallery was open to the public on Saturday afternoons from November to May with an admission fee of twenty-five cents. Mr. Edgar Pike, who was on the Park Board, wanted to place this art collection at the new building located at the fairgrounds, which had just been completed. Mr. Pike also wanted to transfer the ownership of the artworks to the city. He wanted the art gallery to be recognized as a permanent institution and allow the people of the community more access to the pictures than was possible at the original gallery in the Public Library. In March of 1909, the ownership of the art was transferred to the city and the Dallas Art Association donated its art collection to the city of Dallas. The Dallas Museum of Art (known as the Free Public Art Gallery of Dallas, at the time) was opened and presented to the community in April of 1909.

The Dallas Museum of Art offers several different programs and activities for those who have special needs. One of these activities is called Meaningful Moments and is held every third Tuesday of every month and is designated for those who have early-stage dementia. This program offers people with dementia, and their family members or caregivers, an opportunity to relax and to connect with the art galleries. Another program they offer for those with special needs is called Art Beyond Sight, and this is held in the month of October for those who have difficulties seeing. This program hosts several different activities which focus on ways to experience art by using the other senses. One of the other special needs programs the Dallas Museum of Art offers is Autism Awareness Family Celebrations and this allows those who have Autism to relax, explore nature, and participate in storytelling. This museum also offers workshops for both children and adults that allow each individual to express and expand their creativity.

This museum is handicap accessible and offers accommodations for those who have special needs. All of the public galleries are wheelchair accessible and the museum supplies wheelchairs for those who may need one while visiting.  All entrances and restrooms are ADA (Americans with Disabilities Act) compatible, and they allow companion service dogs in the museum. They also offer amplified hearing aids for those who are hearing impaired and would like to attend a lecture.