Built between 1898 and 1900, Nashville, Tennessee’s Union Station is one of the city's unique and inspired historic architectural landmarks. The imposing terminal and office building was designed in the Richardsonian Romanesque Revival-style by Richard Montfort, then Chief Engineer of the Louisville and Nashville Railroad. Reaching its peak during World War II, when many soldiers were transferred to and from Nashville, the station declined and was closed in 1979. That year, when the station building was acquired by the General Services Administration for use as a federal office building. In the 1980s, investors came forward to restore the space and convert it into a luxury hotel. After evaluating the cost of a major rehabilitation project, the property was conveyed to the Metropolitan Government of Nashville and Davidson County in 1985 through the Historic Surplus Property Program. In the following years, Union Station was rehabilitated into a hotel and restaurant. The building continues to be run as a hotel to the present day, with many of its unique architectural features, including the 65-foot, barrel-vaulted lobby ceiling, gold-leaf medallions and original Luminous Prism stained glass, still intact.

Union Station just after completion in 1900 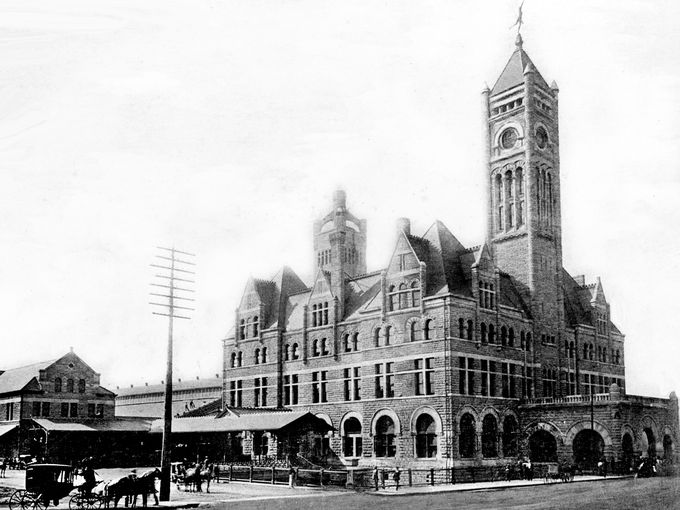 Soldiers on furlough buying tickets at Union Station during WWII 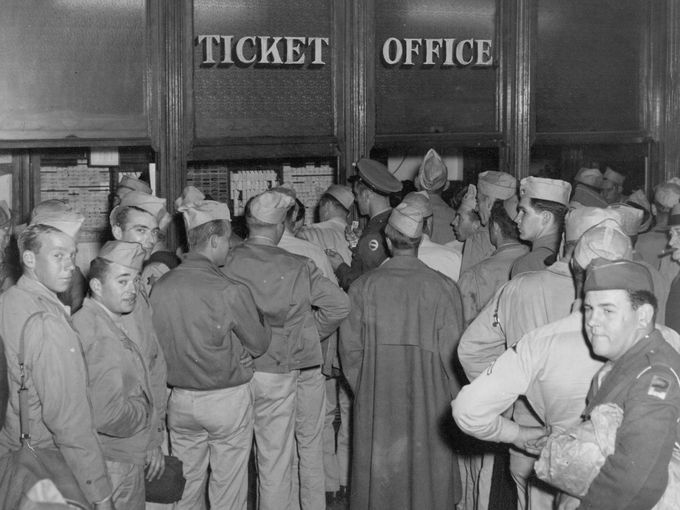 The exterior of the Union Station Hotel today 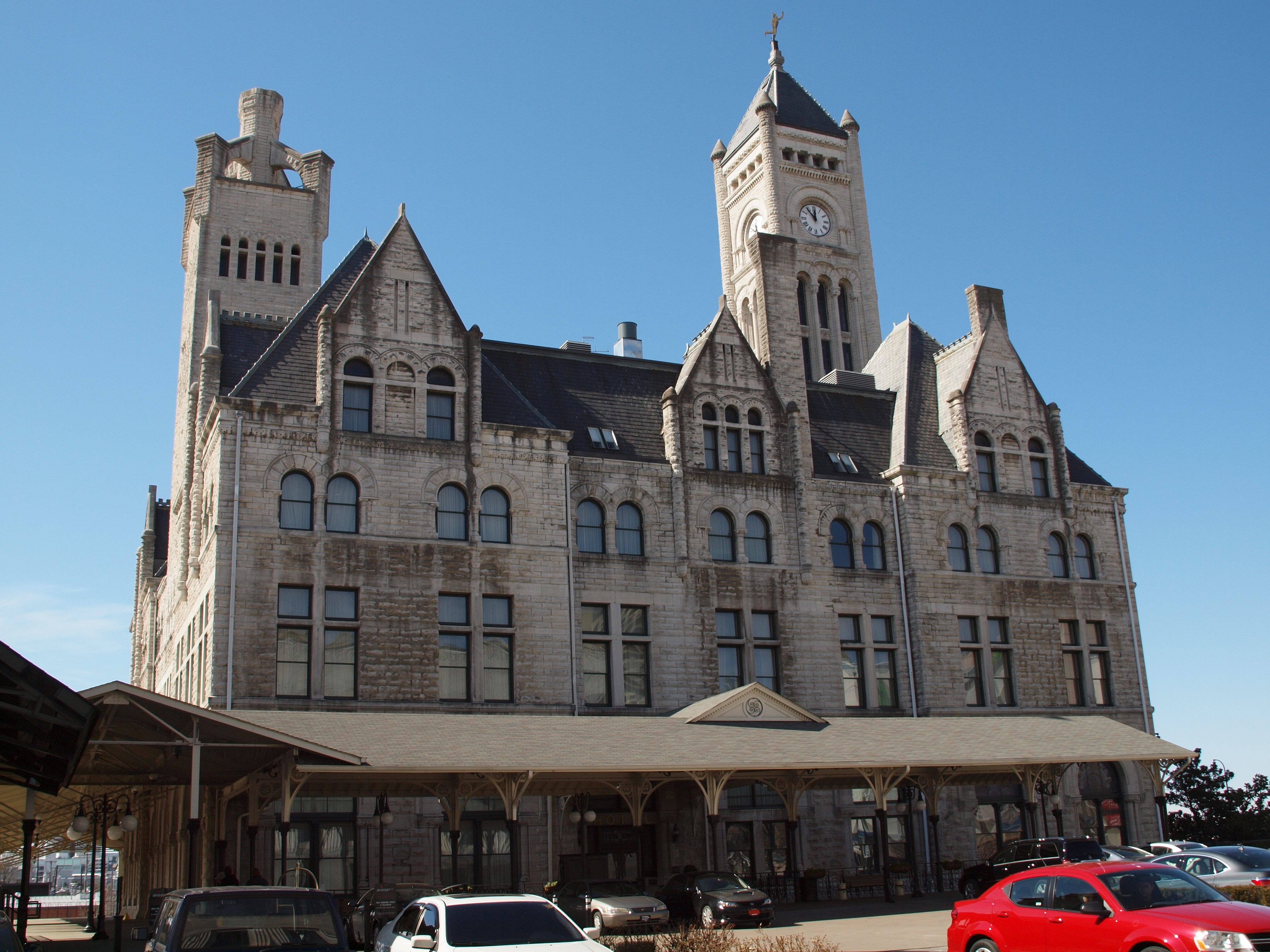 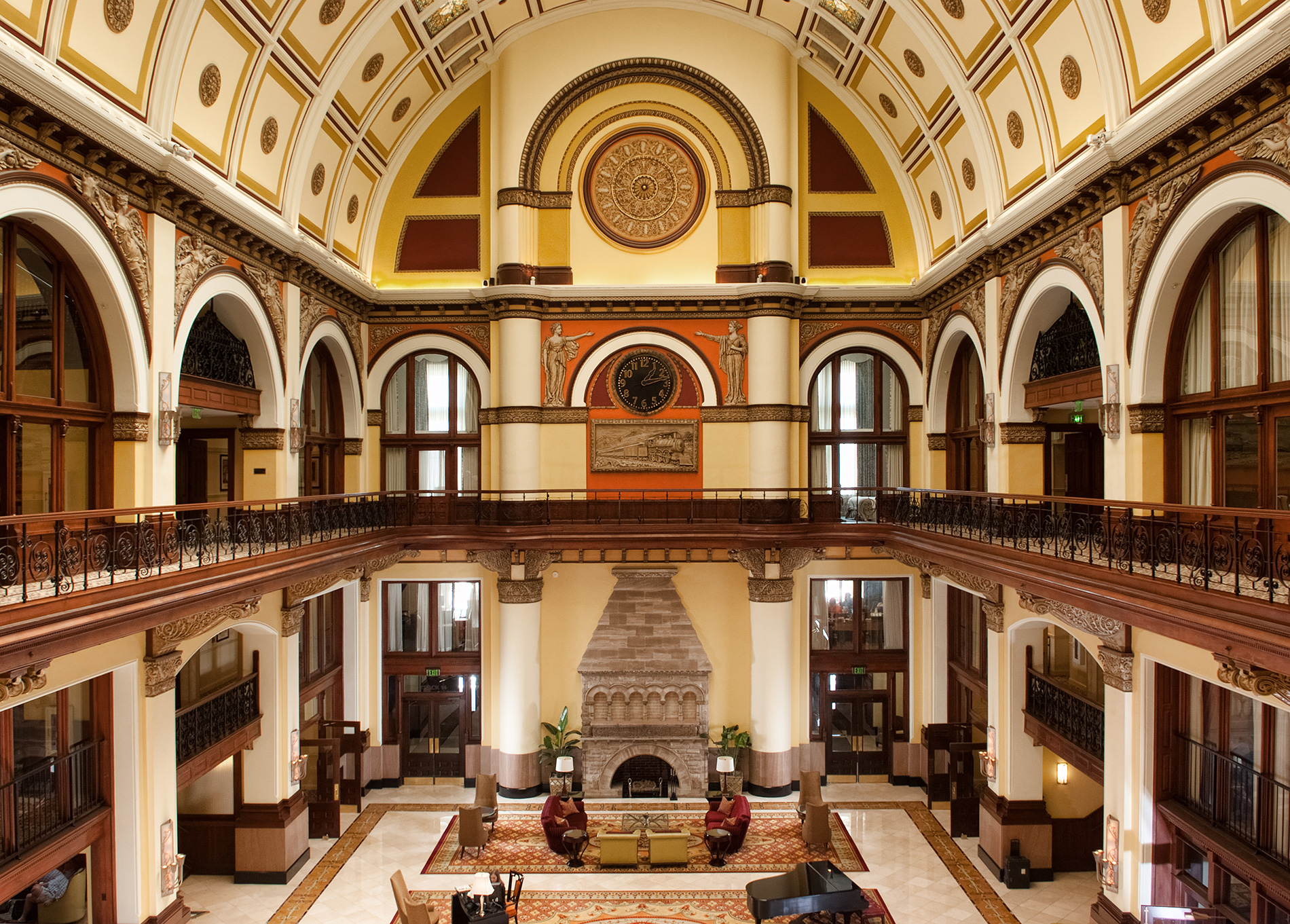 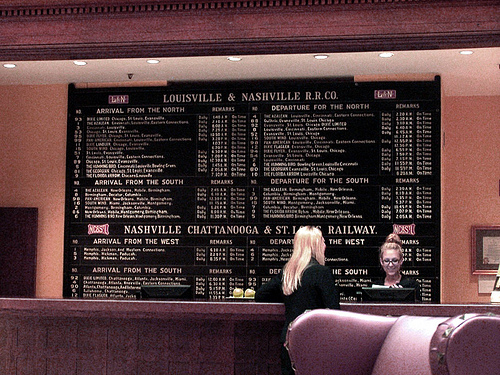 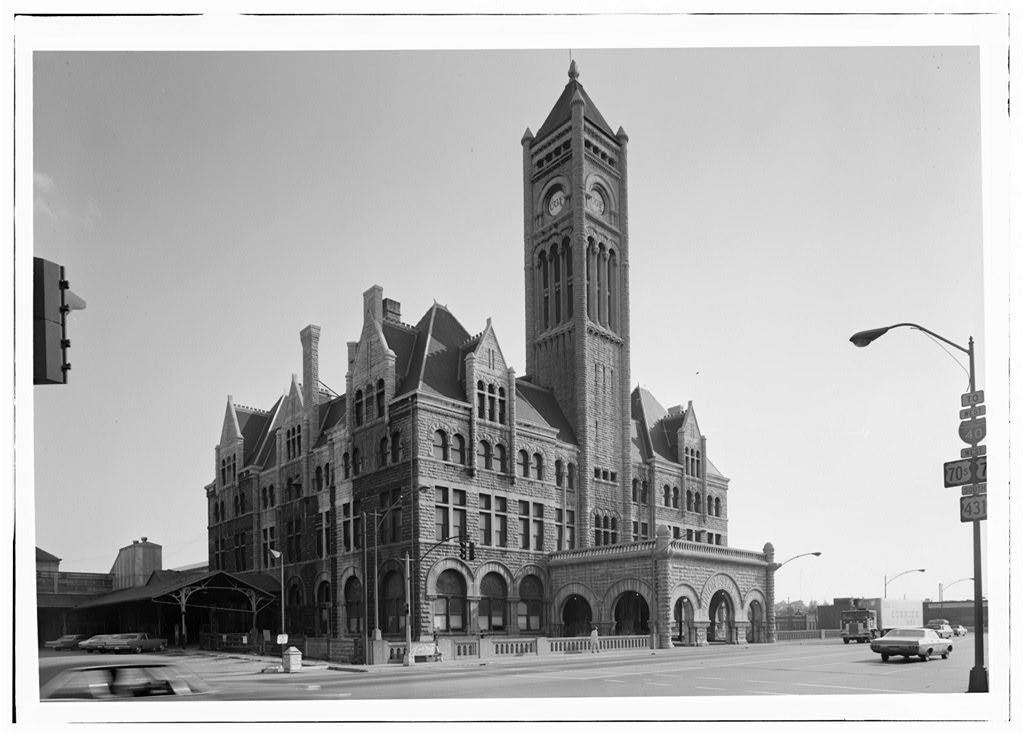 Nashville's Union Station was built by the Louisville and Nashville (L&N) Railroad at the turn of the 20th century (construction began in 1898), when railroads were the dominant and most dynamic form of transportation. The station was designed by Richard Montfort, a company engineer of L&N, and opened officially on October 9, 1900. The Romanesque-style structure included turrets, stone arches and a soaring clock tower, all constructed of stone from Bowling Green, Kentucky and Bedford, Indiana, and trimmed with Tennessee marble, and resembled a fairy-tale castle more than a modern, utilitarian building. One admirer has described the interior as a "mini-Grand Central Station." As impressive as the terminal was, however, the passenger trainshed, which measured 250 by 500 feet with a clear span of 200 feet, was an engineering marvel for its time. In 1900 it was the longest single-span, gable roof structure in the country. After a fire damaged the shed in 1996, the building was left exposed to the elements. After years of exposure, the trusses and framing were deteriorated beyond repair and the shed was razed in early 2001.

The terminal serviced many passengers in its over seven decades of existence, including celebrities as diverse as Mae West and Al Capone (Capone was not a voluntary passenger, however, as he was in the process of being transferred to prison by Federal authorities). It also served many soldiers during the Second World War who passed through Nashville, and they were often entertained by local celebrities at the USO canteen on site. The station's decline began in the 1950s, with heavy competition from auto and air transportation; by the 1960s, it served only a few trains a day and in 1975, the station was condemned and closed. Amtrak continued to use the trainshed for passenger traffic until 1979 when the station building was acquired by the General Services Administration for use as a federal office building. After evaluating the cost of a major rehabilitation project, the property was conveyed to the Metropolitan Government of Nashville and Davidson County in 1985 through the Historic Surplus Property Program. In the following years, Union Station was rehabilitated into a hotel and restaurant. The Nashville Union Station and Trainshed was listed as a National Historic Landmark and listed in the National Register of Historic Places in 1969. Because of the demolition of the trainshed in 2001, the National Historic Landmark status was removed in 2003, but the building continues to be listed in the National Register of Historic Places.