Also called "Oriole Park" or "Camden Yards," this stadium was completed in 1992 and replaced the old Memorial Stadium for the Baltimore Orioles. Architecturally inspired by the classic look of historic jewel box parks, it was the first of the "retro" major league ballparks. Located in Baltimore in the Camden Yards Sports Complex, the stadium is situated just blocks from historic sites near the Inner Harbor, including the birthplace of Babe Ruth. Its amenities include a picnic area for fans, sculptures of renowned baseball players, and a seating capacity of 45,971.

View of the main entrance from Russell Street 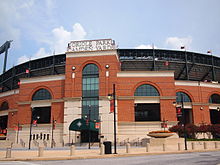 View of the field and the former B&O Warehouse

Oriole Park at Camden Yards was built on the old rail yard for the Baltimore & Ohio railroad. It was the first park since Ebbets field to have an outfield wall constructed of wall segments. The field is 16 feet below street level. Every seat in the ballpark is green, except for two. Orange seats mark the landing spot where Cal Ripkens 278th home run broke Ernie Banks' for shortstops (Section 96, Row 7, Seat 23), and where Eddie Murrays 500th career home run ball landed (Section 86, Row FF, Seat 10).1

The front entrance features a statue of Babe Ruth simply named "Babes Dream." Also in the area of Babe's statue are sculptures indicating the retired Orioles jersey numbers. Six bronze sculptures of Orioles greats are located in the walking zone of the area behind the bullpens. These are easily visible from the picnic area inside the stadium.2

The design of Camden Yards was the first of an architectural trend in stadium-building, a design referred to as the "retro-classic" style. This style includes all the luxuries of the newer parks, but with aesthetics that recall the old jewel box parks.4 Many ballparks were influenced by Camden Yards' retro-classic architecture, including AT&T Park in San Francisco, California and Citi Field in Queens, New York.5