The B&O (Baltimore and Ohio) Railroad Museum in Baltimore, Maryland celebrates its long history as the birthplace of American railroading. It houses 8 original locomotives and cars, including The William Mason, The Thatcher Perkins, The Memnon, The John Hancock, and The Pioneer. Private and Smithsonian collections, video presentations, historic train models, and the Mile One Express Train Rides, make up the bulk of the experience. Tickets are $18 for adults, $16 for seniors, and $12 for children ages 2-12. 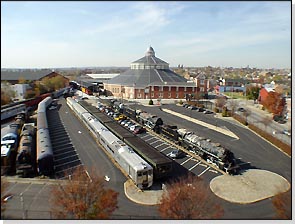 Restored locomotive in the Museum, among 7 others 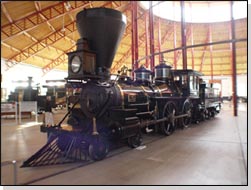 In 1829, a group of businessmen, surveyors, and engineers established the Baltimore and & Ohio Railroad in Baltimore, MD. This company produced the first mile of commercial railroad track in the US; the Mile One Express Train Rides at the Museum still use the very same track as part of their exhibit.1 The B&O then became the first company to operate an American steam locomotive, and was responsible for many innovations in railroading in during lifetime.2

During the Civil War, the Union and Confederacy battled fiercely over control of the railroads, specifically the B&O because it traveled through key strongholds like Harpers Ferry. As soon as the war broke out in 1861, both the Union and Confederacy laid claim to the historic railroad. John Garret, then the President of B&O, was a native Virginian and sympathized with the Confederacy but because of logistics and the railroads Northern-central location sided with Lincoln during the war.3

Even before the Civil War officially began, there were tensions on which side might control the railroad. Shortly before 1861, Gen. “Stonewall” Jackson was training troops at Harpers Ferry in Virginia where a key B&O railroad line passed through. Jackson wrote to Mr. Garrett on two separate occasions, requesting that the trains passing through Harpers Ferry be limited to a two-hour period each day. Jackson asked this of Garrett because he said that trains traveling at night or in the morning hours disturbed his training and his troops’ sleep. Garrett had little choice but to agree.4

Then, on May 23, 1861, the day that Virginia seceded from the Union, Jackson revealed the trap he had planned. Jackson ordered Captain John Imboden in Point of Rocks, MD to only allow westbound trains until noon and to stop all eastbound rail traffic. Imboden and his men then destroyed a sizeable portion of railroad track. Meanwhile, Jackson had ordered Colonel Kenton Harper in Martinsburg, VA (now West Virginia) to stop all westbound trains and destroy railroad track at his location. In effect, Jackson had trapped 300 rail cars and 56 locomotives of the B&O Company from traveling east or west. Those cars and locomotives were order to be delivered to Richmond, VA (Confederate capital) where they would become part of the Confederate rail service.5

April 1987 marked the end of B&O's corporate existence; it was absorbed into CSX Transportation.6 CSX established the B&O as a separate entity from the corporation.7 In 1961, the museum and station were designated as a U.S. National Historic Landmark.8 The museum became an independent nonprofit education institution in 1990, breaking all corporate ties. CSX deeded the properties and collections, and provided an endowment, to the museum board.9

The B&O railroad museum, located in Baltimore City's southwest neighborhoods at the original site of the Mt. Clare Shops, now houses exhibits showcasing the history of this historic railroad. Recognized as "the Birthplace of American railroading,"10 the museum houses the most comprehensive collection of American railroad artifacts in the world. Visitors can view historic train cars, enjoy train rides (Wednesday–Sunday from April–December, and weekends in January), and watch video presentations.12 This museum reveals "the drama of American railroading, its people, culture, and legacy to a wide and diverse audience."13