Andrews' Raiders and the First Medal of Honor Recipients

This monument within Chattanooga National Cemetery pays tribute to the men known as the Andrews' Raiders. The monument is a bronze replica of a locomotive - a reference to an event known as the "Great Locomotive Chase." The event began when Union spy James Andrews and his men hijacked a locomotive with the intention of using it to destroy Southern railways. Andrews and his men were eventually apprehended by Confederate troops and executed, including Andrews himself.

Frontal view of the tombstones of the eight executed Andrew Raiders. (Photo by Dan Benington) 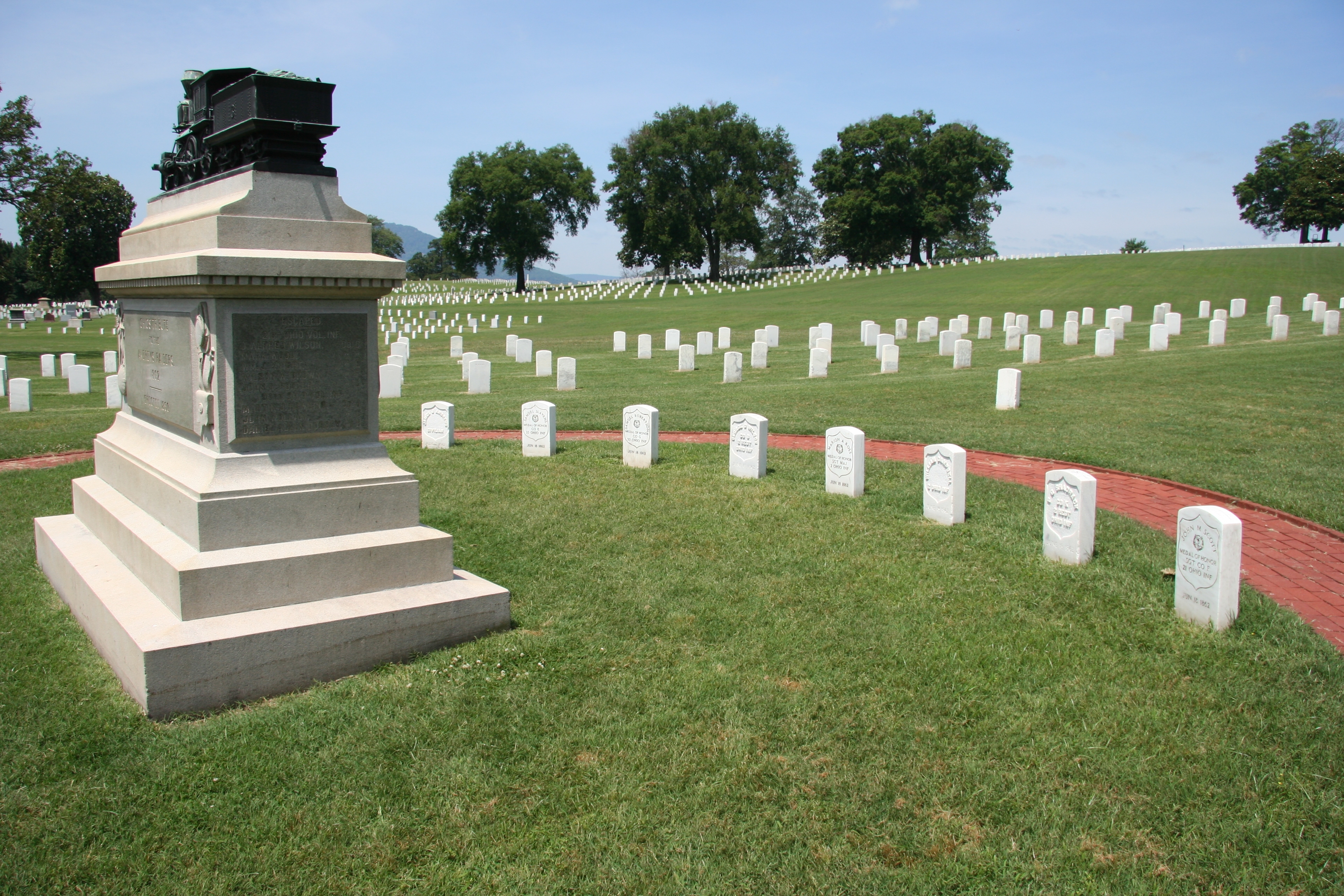 View of the memorial from a distance. (Photo by Brandon Fletcher) 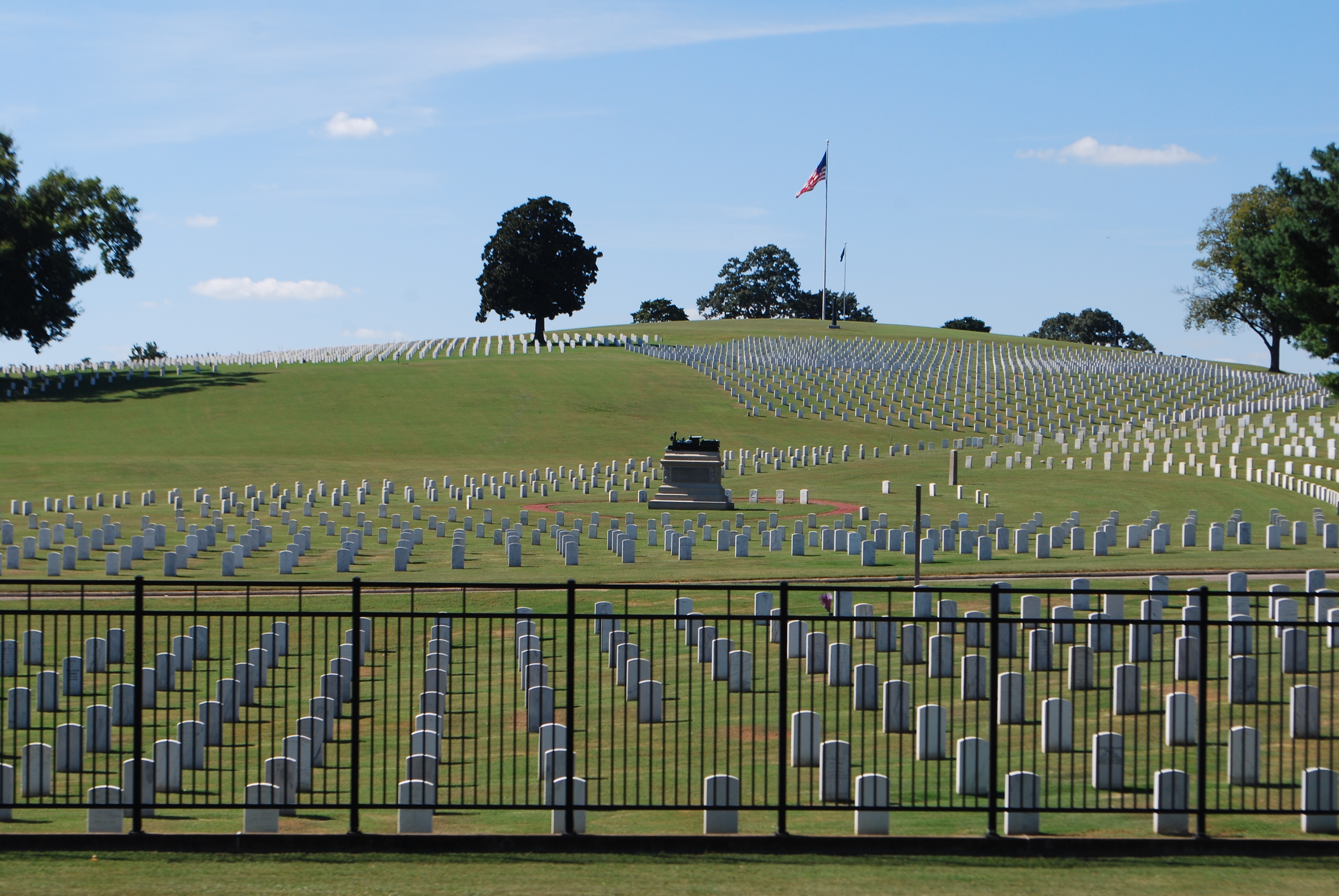 On April 12 1862, one of the most interesting chapters of the Civil War related to railroad logistics began when Union soldiers under the direction of civilian James J. Andrews hijacked a locomotive known as the General. What followed would come to be known as "The Great Locomotive Chase," -the 1860s version of a high-speed chase that combines high drama with a history lesson about the importance of railroads in the Civil War.

James J. Andrews was a civilian spy and contraband merchant during the war who approached Union General Ormsby Mitchel. As Mitchel's army advanced on Huntsville on its way to Chattanooga, Mitchel agreed to support a bold plan by Andrews. The spy would lead a raiding party of Union troops behind Confederate lines to Atlanta. These men would steal a locomotive and race northward, causing damage to the rail system the entrie way so as to disrupt Confederate supply lines. If successful, Southern defenders would be unable to receive supplies and reinforcements via rail that would make them vulnerable to Mitchel's main attack.

On April 7th, Andrews selected twenty-two volunteers from among different Ohio infantry regiments. Together with one other civilian, the men donned workman's clothing and slipped behind enemy lines. Two men were caught during the journey while two more overslept and were left behind, as speed and coordinated movements were key.

The remaining spies made their way to the chosen rendezvous-the small town of Big Shanty (present day Kennesaw). This location was chosen because of the rail station did not have access to the telegraph line. In the early morning of April 12th, while crew and passengers ate their breakfast, Andrews and his men unhitched most of the cars from a locomotive known as "The General." The Great Locomotive Chase was on.

Confederate soldiers reacted more quickly than Andrews had anticipated. Two of Andrews' pursuers, Anthony Murphy and William Fuller, chased the locomotive on horseback for the entire duration of the ordeal: seven hours and over 87 miles. With men on horseback on their trail, Andrews men had little time to stop and destroy of rails and telegraph lines. They also lacked the time needed to resupply the train.

At around 1 p.m. the General finally ran out of steam two miles north of Ringgold. The men abandoned the train, but they were unable to escape. Confederate troops and other pro-Southern partisans were able to capture all of the spies. After a brief trial, Andrews and eight of his men were hanged in Atlanta. The others either escaped or were used in prisoner exchanges. For their bravery, the Union soldiers were the first recipients of the Congressional Medal of Honor. As civilians, Andrews was not eligible for this award.