Competed in 1878, the Ransom Gillis house was designed for a dry goods merchant and his family by architects Henry Crush and George Mason. The Venetian Gothic home in Brush Park (once one of Detroit’s most prestigious neighborhoods) is known for its signature turret of stone, tile, and brick and other ornate exterior details. The carriage house that once stood at the back was the original workshop for Pewabic pottery. The house belonged to some of Detroit’s wealthy families for decades before becoming a rooming house in the 1920s. As the neighborhood declined, the home was completely abandoned by the 1960s and left to crumble. The roof caved in, and the city mothballed the property in 2005-2006. In 2015, a partnership finally renovated the property, as part of a $70 million development project for the Brush Park neighborhood. The renovation was documented on HGTV’s Rehab Addict with Nicole Curtis. 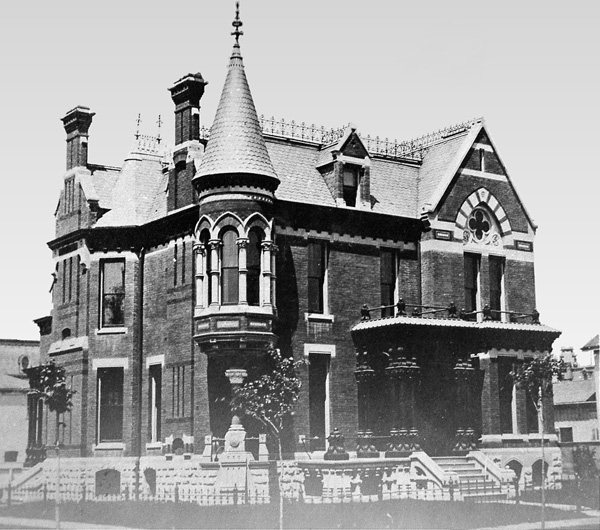 Ransom Gillis only lived in the home with his family for 2 years, but it has retained his name for almost 140 years. 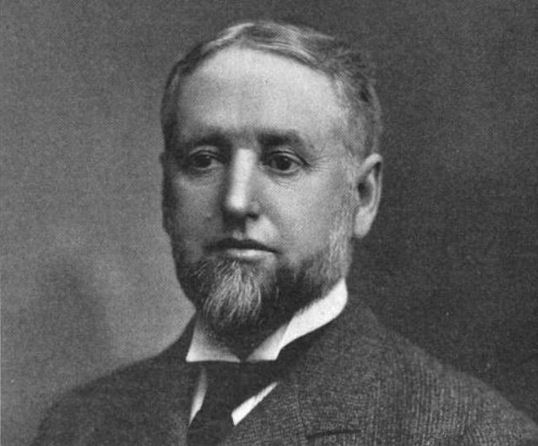 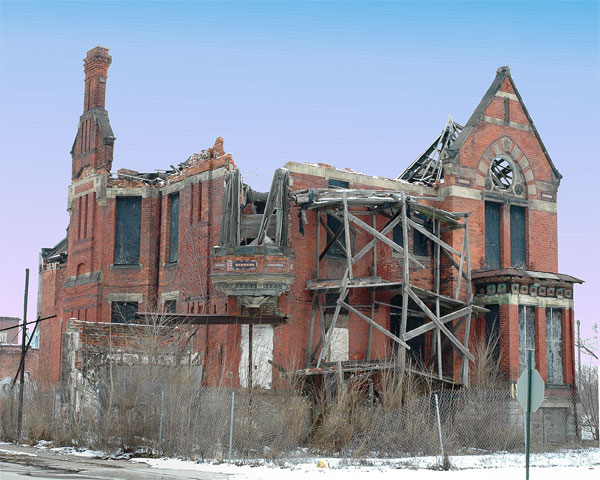 The home being taken over by overgrowth 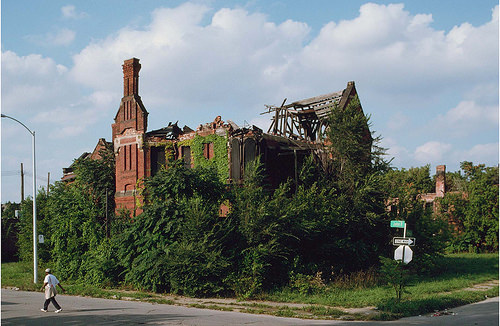 The home just before renovation in 2015 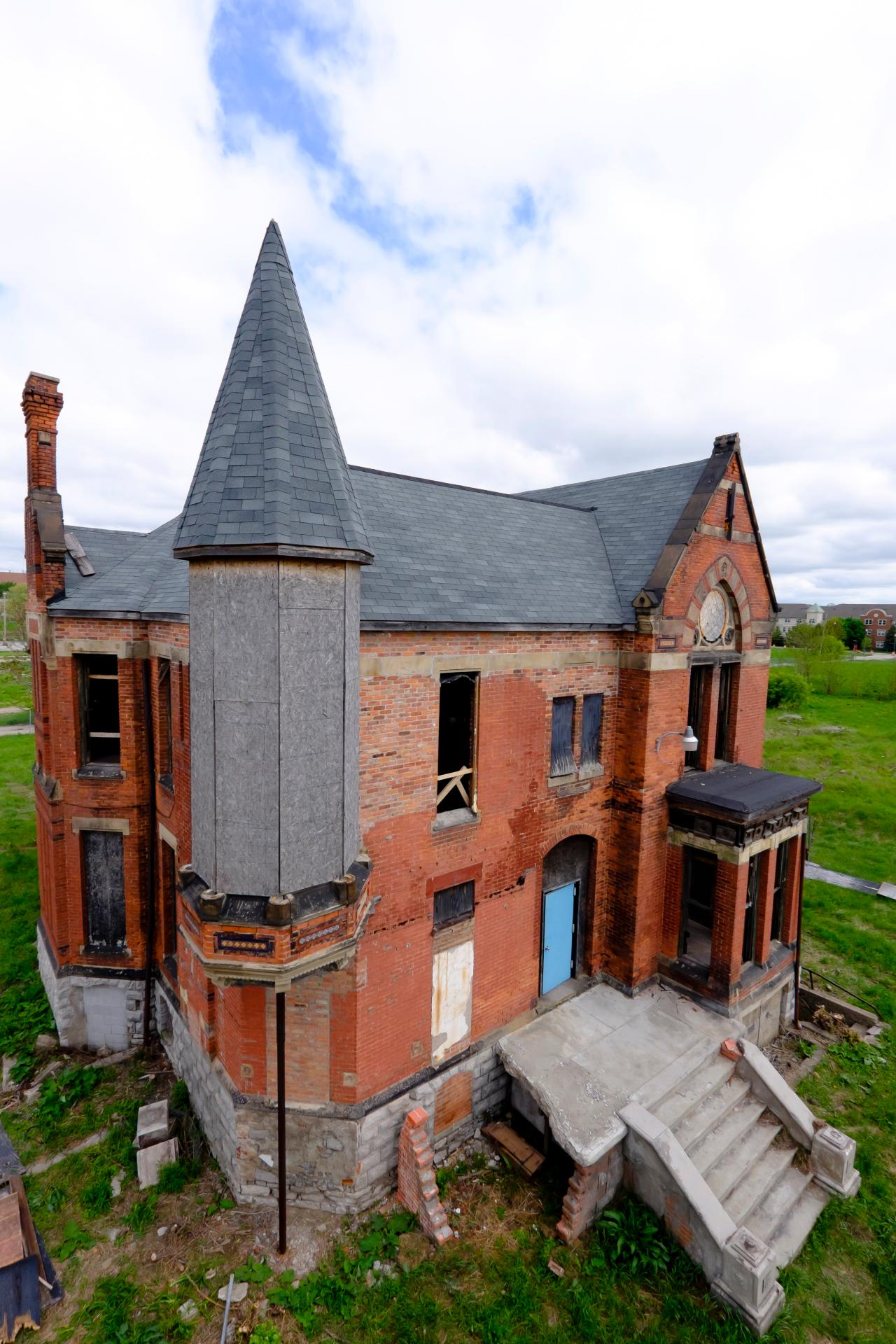 A close-up of the turret before renovation 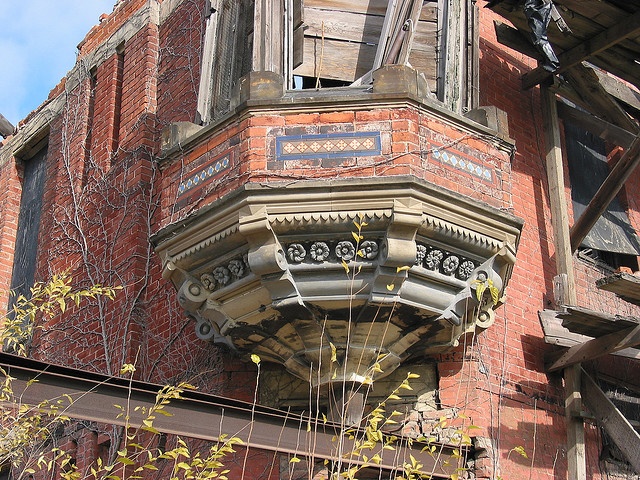 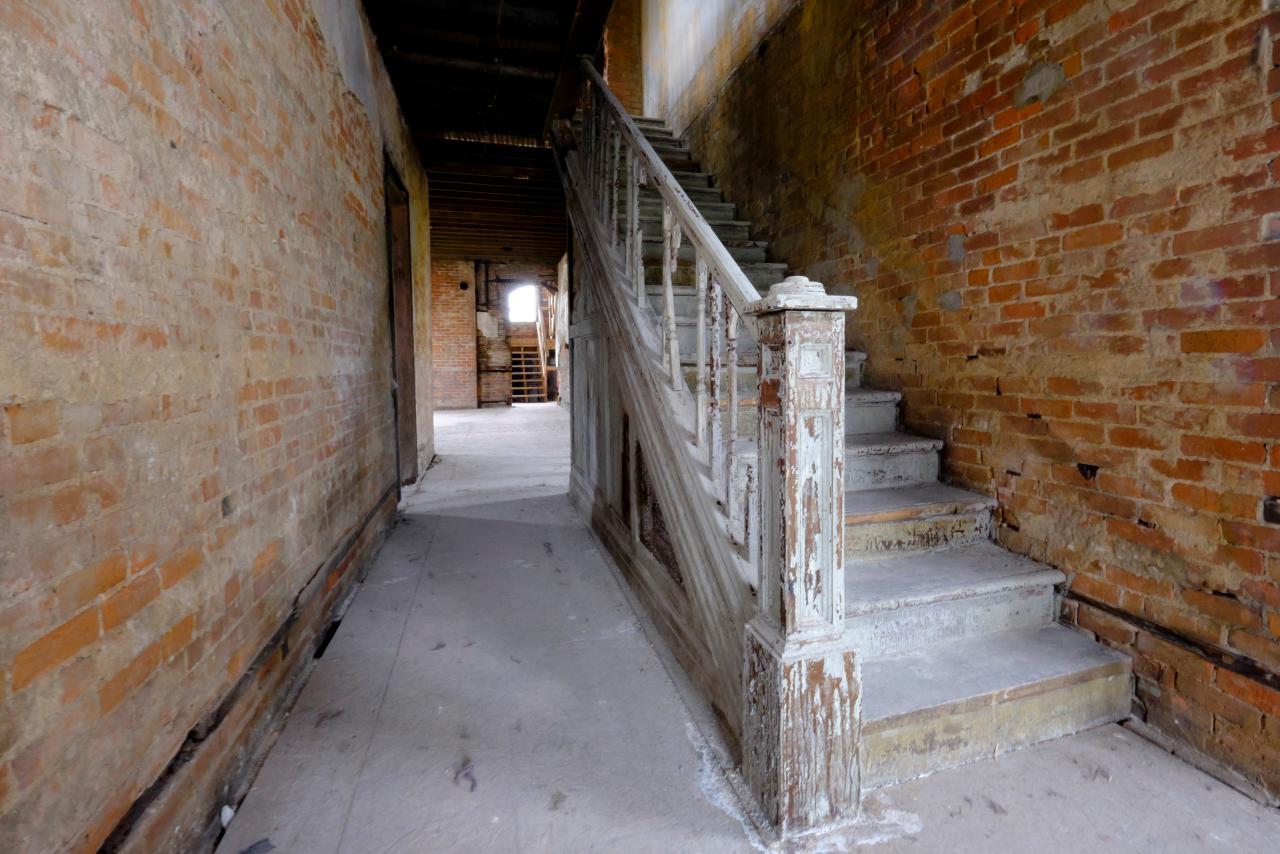 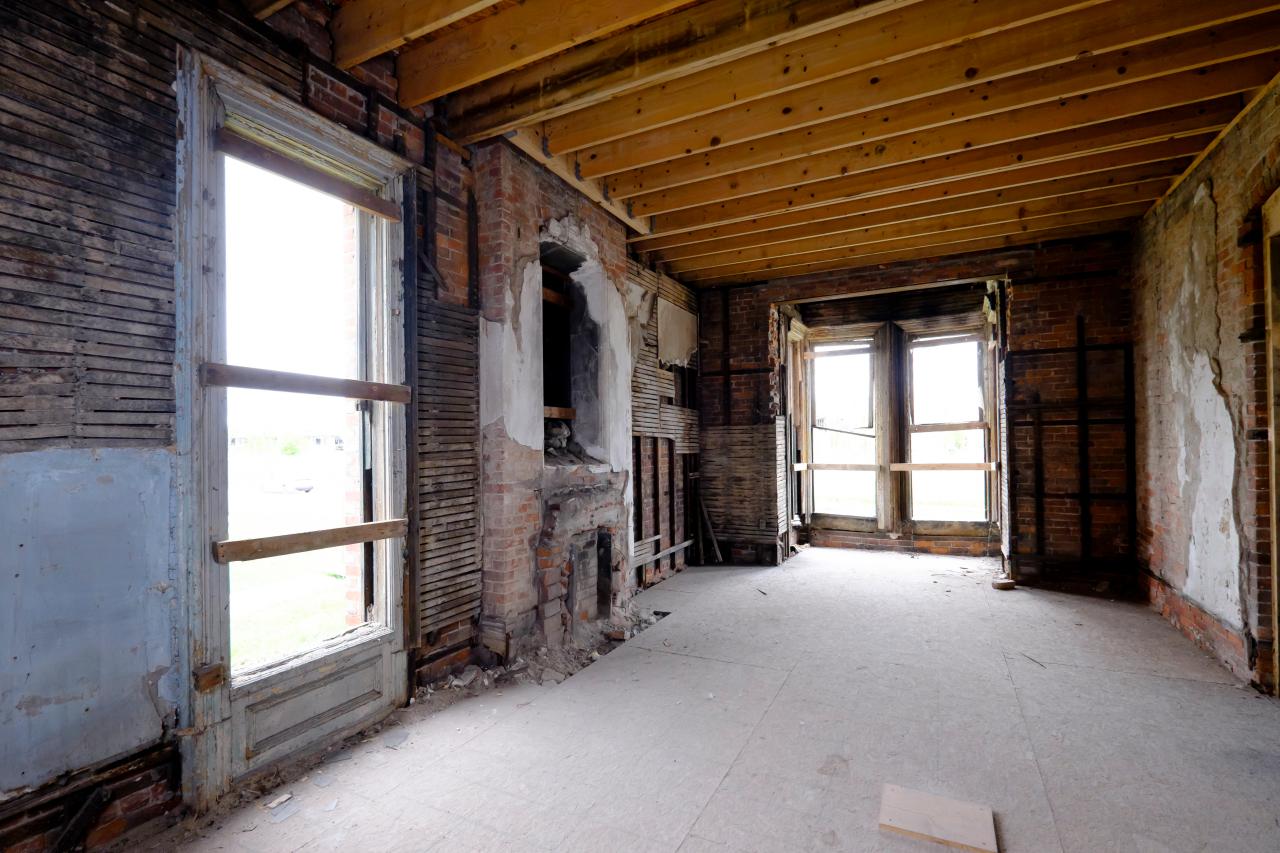 The home after the 2015 renovation 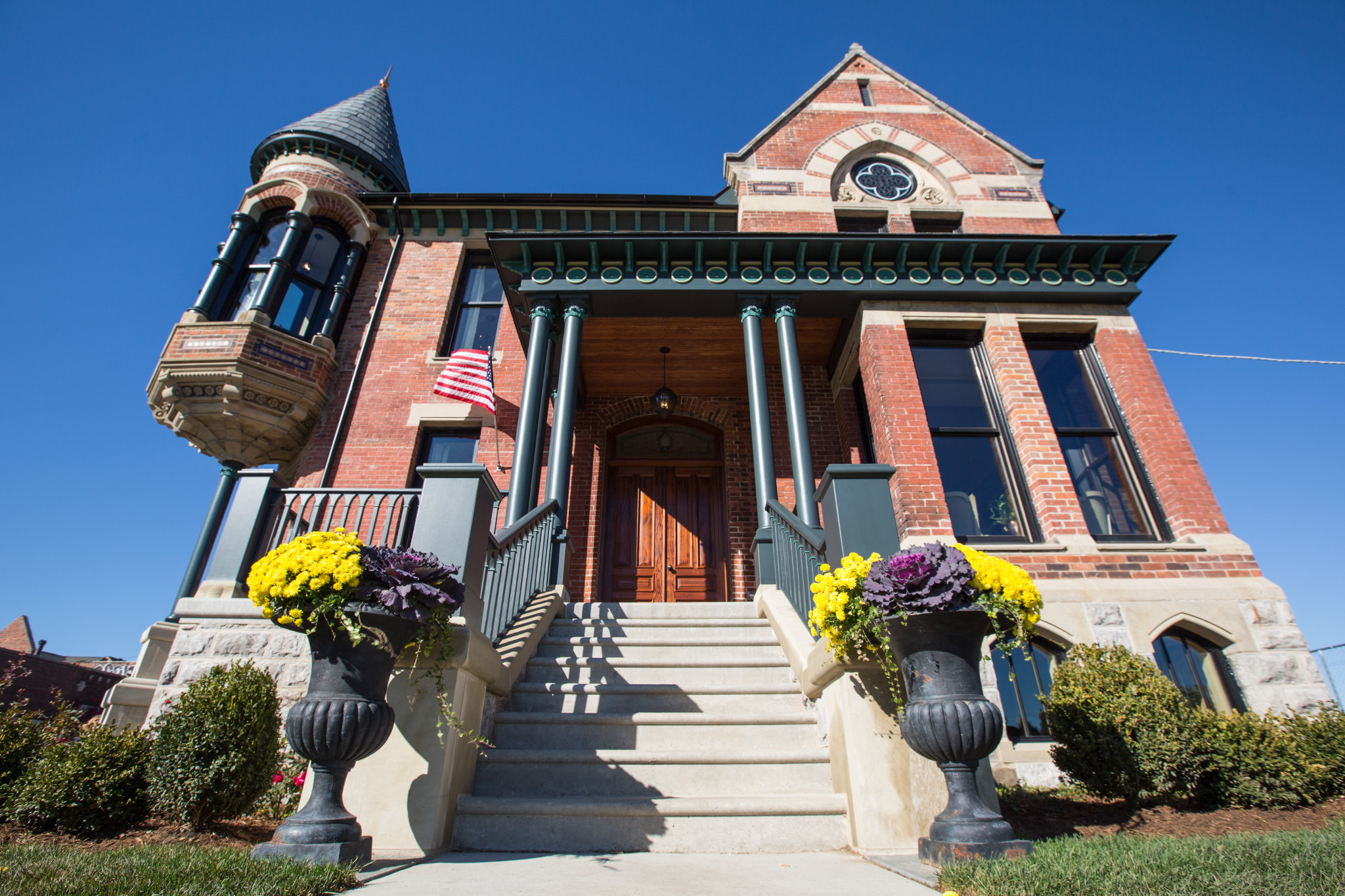 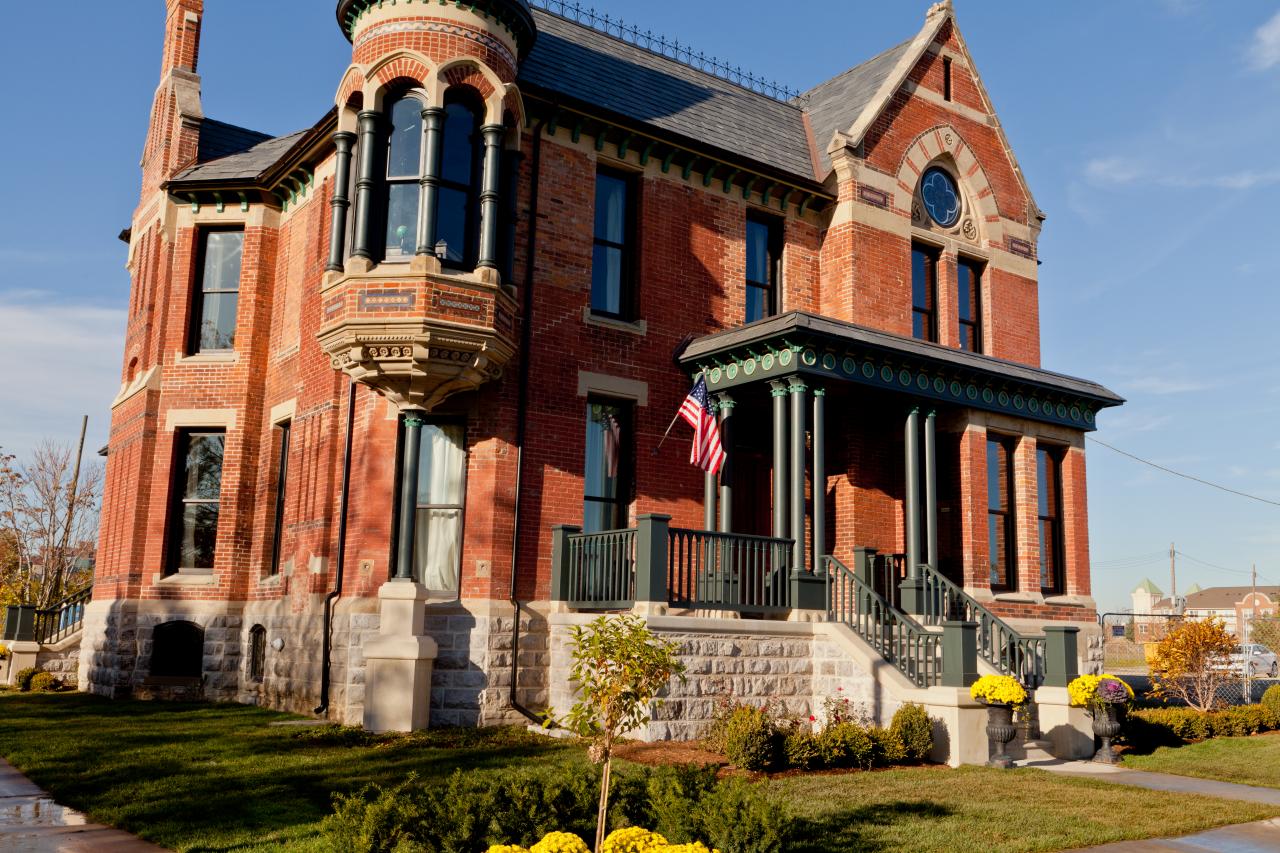 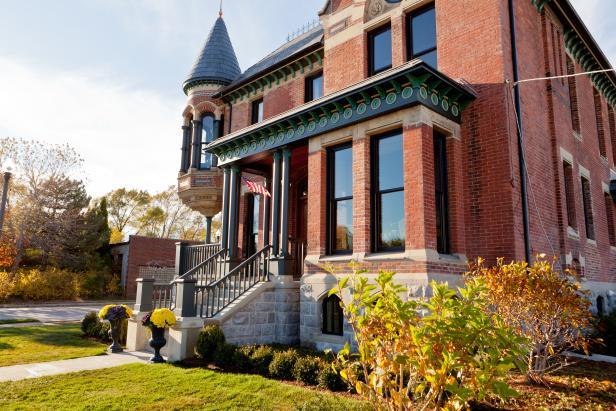 The signature turret after renovation 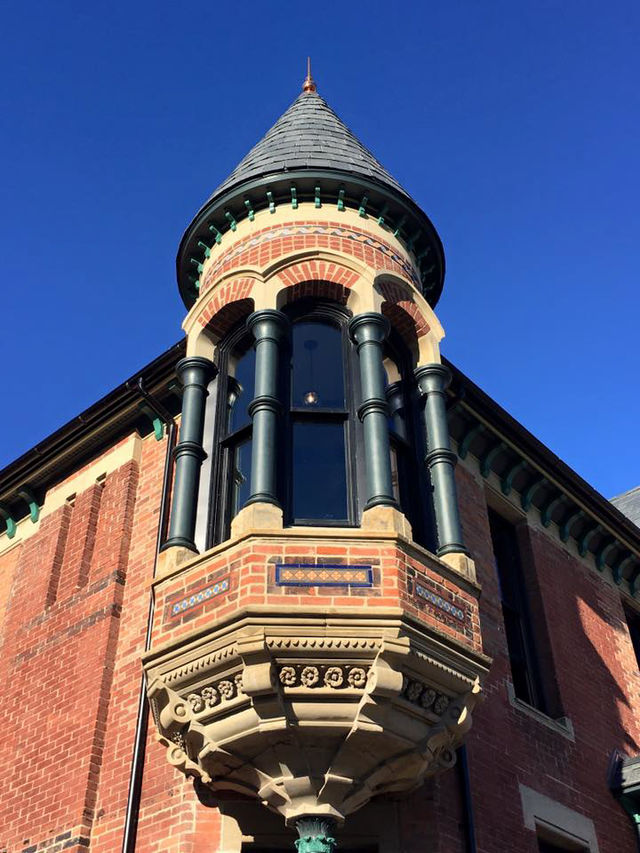 Inside after renovation. Notice the Pewabic tiles on the floor, a nod to the fact that the home's carriage house was the birthplace of the Pewabic pottery artform in 1903 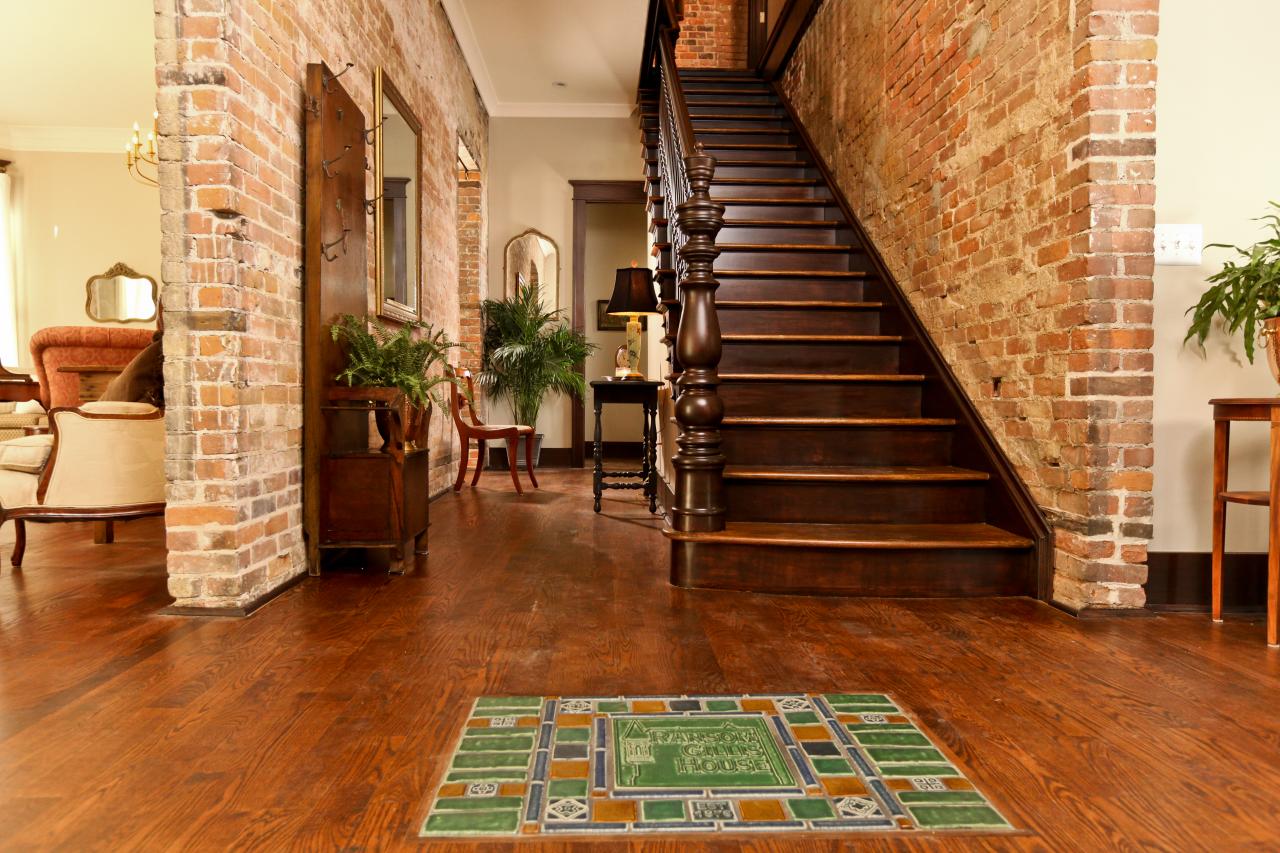 A fireplace after renovation 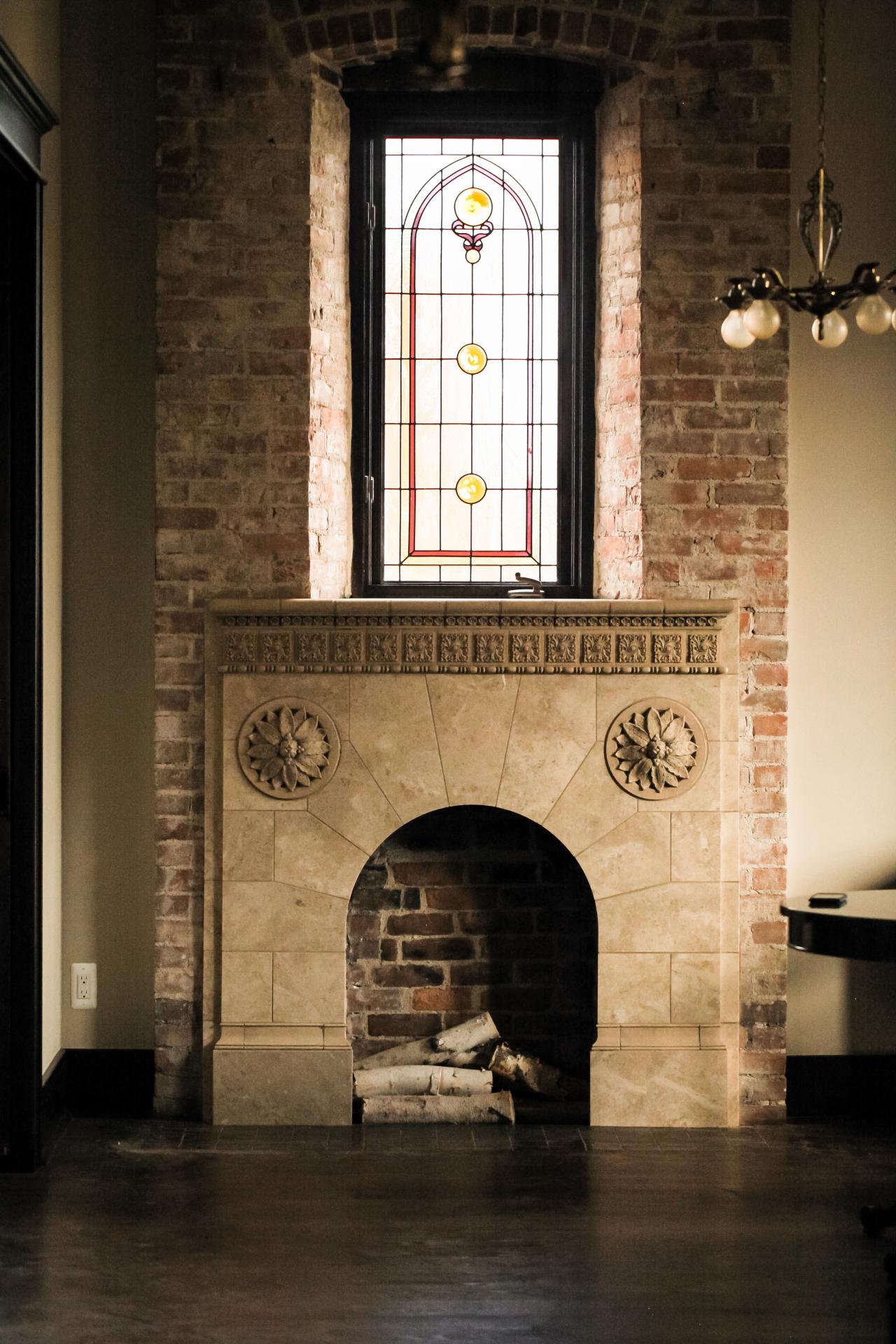 The master bedroom after renovation, with a stained glass window and a photo of Ransom Gillis over the fireplace 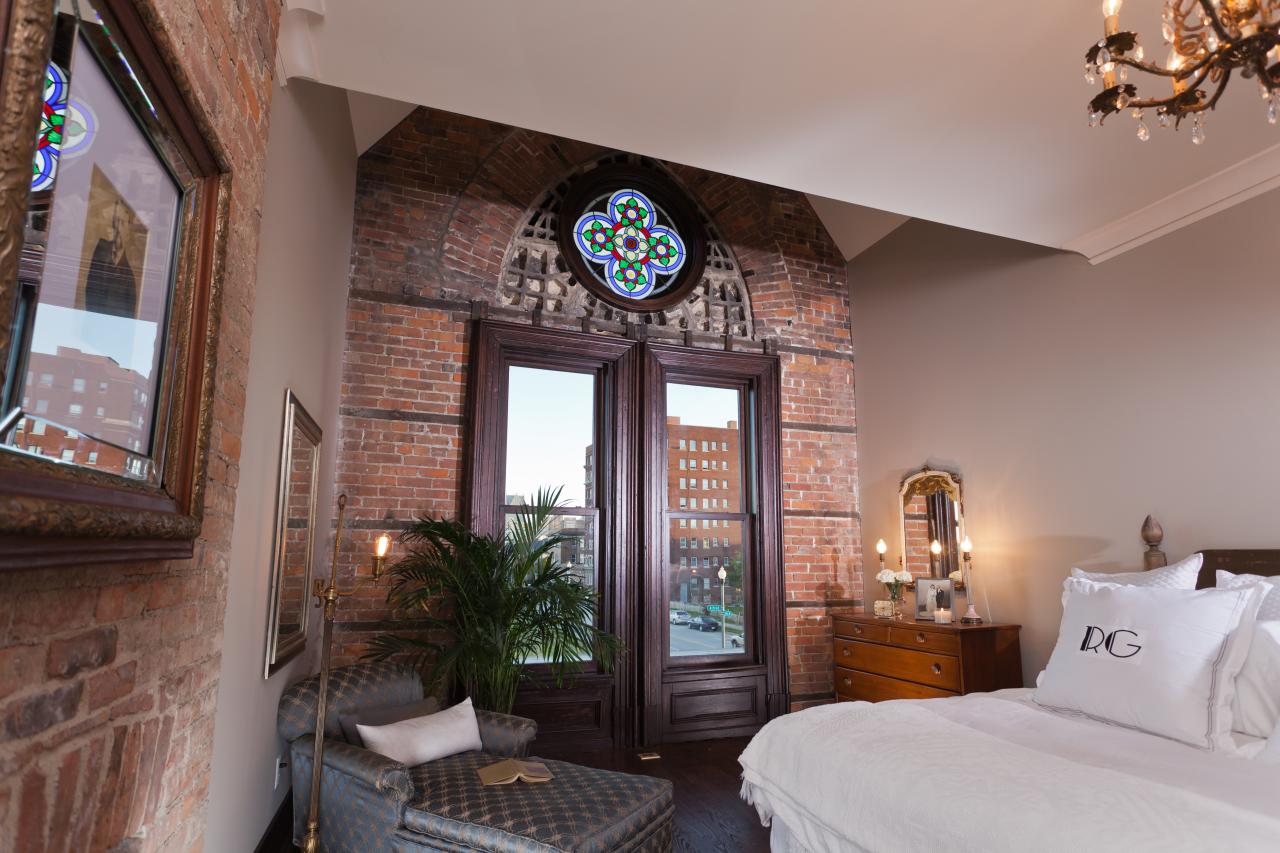 Ransom Gillis co-founded a successful wholesale dry goods business in 1872 and became one of Detroit’s most prominent businessmen for the time.1 In 1876, architect Henry T. Brush and his assistant George Mason designed a home for Ransom, his wife Helen, and their three young children. The home was completed in 1878 for only $12,000, one of the cheapest homes ever completed by Brush. Mason would go on to become one of Detroit’s most eminent architects and was mentor to Albert Kahn.2 The Venetian Gothic home was located in Brush Park, at the time Detroit’s most elite neighborhood for the very wealthy, at the corner of John R. and Alfred Streets.

The red brick home is 4,800 square feet with three bedrooms and 11 fireplaces.3 Dan Austin from HistoricDetroit.org describes the exterior: “The centerpiece of the structure was the turret in the front left corner. It was accented by five rows of tiles of simple geometric designs in hues of bright blue, red, yellow and brown. Similar tile work was spread throughout the rest of the structure. The base of the turret was decorated with stone carvings of quadruplets of flower blossoms, similar but all slightly different. The turret was supported from below by an ornate stone post. Dark ornately carved wooden columnns enclosed the porch at the entrance to the house. A steep, dark slate mansard roof with ornate iron cresting completed the peaks in a traditional detail of the day.”4 The home was surrounded by a wrought iron fence.2

Gillis and his family would only live in their new lavish home for two years before it was sold in 1880, and they built a new home next door. The new owners, Mary and Charles Stinchfield, were a lumbering family and lived in the home for eight years before selling to Alanson and Cornelia Fox, also wealthy lumber barons. The Foxes owned the home for 28 years, the longest of anyone and the family most often associated with it. They built an addition onto the back.2

It was during the Foxes’ ownership that an important milestone in Detroit’s history took place on their property. Mary Chase Perry Stratton, a ceramics artist, approached Alanson in 1903 about renting his vacant carriage house behind the residence as a pottery studio for $8 per month.2 The carriage house would become the birthplace of the famous Pewabic pottery, founded by Stratton and her business partner Horace Caulkins. Cornelia Fox hosted the first Pewabic pottery exhibition in the carriage house for her high-society friends in late 1903.2

By 1920, the wealthiest patrons of Brush Park had left, and the Gillis home was converted into a multi-family rental. In 1921, the homes in the neighborhood were renumbered so that 63 Alfred St. became 205 Alfred St. The stables that had housed the Pewabic pottery workshop were torn down in 1935, and a restaurant took its place. During the Depression, a storefront was added, with a grocery store run by Ann Essa and her family. The storefront addition dramatically altered the front of the home. The signature turret’s ornate supporting post was taken out, holes were drilled into the exterior walls to create a roof extension, and some windows were filled in with cement.2

Along with the rest of the Brush Park neighborhood, the Ransom Gillis house was left abandoned in the 1960s. Various attempts to restore the home were made in the 1970s and 1980s, but without success. By 2001, the house was owned by the City of Detroit, but the roof and turret had collapsed. In 2005-2006, the city “mothballed” the property, boarding it up to weatherize and protect it from being vandalized.4 The roof was replaced in 2007, but no other repairs were put in place until it was announced in 2015 that a partnership between Quicken Loans, the Brush Park Development Company, and HGTV’s Rehab Addict star Nicole Curtis would renovate the property. The restoration took less than a year, and series of episodes documenting Curtis’ work appeared on Rehab Addict in November 2015. Over 2,000 people turned up to an open house after the restoration, waiting for hours in line for a tour.5 The restoration of the Ransom Gillis home is symbolic of Detroit’s hopeful renaissance as $70 million is planned for development in the surrounding Brush Park neighborhood.