Situated on the southern slope of Mt. Hood, the tallest mountain in the state, the Timberline Lodge was built between 1936 and 1938. It was the result of President Franklin Roosevelt's New Deal Program, specifically as a project of the Works Progress Administration (WPA). The budget for this federally-funded lodge was $1 million. The WPA was by far the largest, as well as one of the most controversial New Deal programs. The WPA put the unemployed back to work by enlisting them to work on several public works projects. The lodge is historically significant not only for its association with the WPA program but also for its "mountain," Cascadian style architecture.

Timberline Lodge was built in 1938 and is a National Historic Landmark. 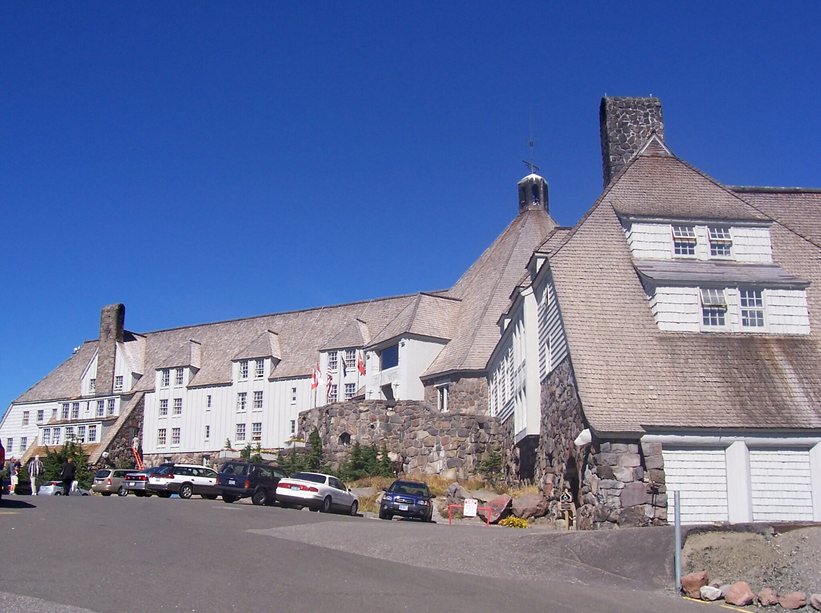 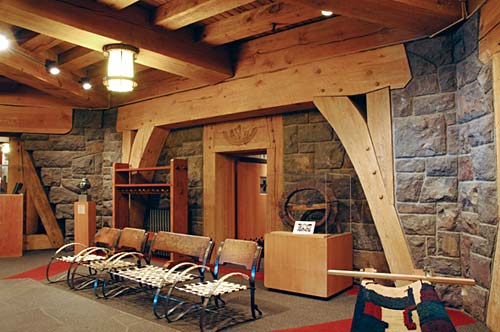 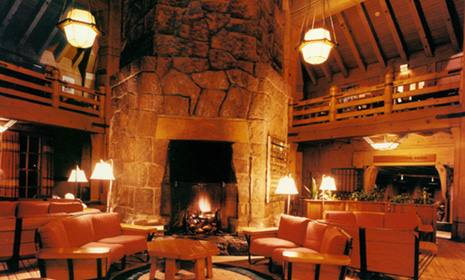 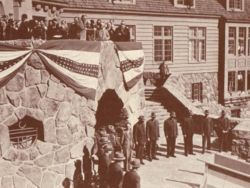 The lodge features many interesting design elements including this arch. 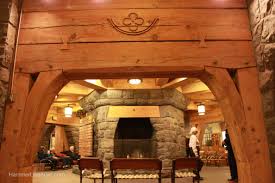 One might see this as a trendy tourist attraction and in one sense it is, but this lodge for skiers and tourists is a product of President Roosevelt's New Deal Program. Timberline Lodge is an iconic property deep-seated in the heritage of America, developed during the crisis of the Great Depression. It symbolizes the nation's optimism and resourcefulness to facilitate progress and growth during a severe economic downturn.
Funding for the lodge was made available through the WPA in 1935, and architect Gilbert Stanley was selected to design the structure. The design involved the "typical rustic features" of a national park and it was to be asymmetrical. The lodge itself was constructed from large, local timber and stones. With the help of other architects, Tim Turner, Linn Forrest, Howard Gifford, and Dean Wright, all helped draw up the design plans and now the goal was to bring the concept to fruition.  The themes for the interior of the lodge were thought up by The Director of Oregon's WPA, Emerson J. Griffith, and included pioneer life, wildlife, and Native American culture. The Oregon WPA was able to commission several notable artists to complete the murals, paintings, and carvings. The interior designer, Margery Hoffman Smith incorporated details such as the wrought-iron detailing and wood furnishings.
Most of the people that worked on the lodge were employed by the WPA. On some aspects of construction such as: excavating, road building, and laying the terraces, young men associated with the CCC were used. Even women, who were not usually employed by the WPA, helped design the fabric furnishings of the lodge, such as bedspreads and rugs. Many of the carvings were created by inexperienced carvers, and this is significant because it exemplifies how desperate men were to hold jobs at the time, even if it wasn't in their field of expertise. They also created all the door knobs and other wrought-iron furnishings as well.
President Roosevelt and the First Lady visited the Lodge in 1937 to see the progress done on this Lodge, as it was a very important part of the WPA's initiative. He walked out on the Terrace and gave a speech about his aspirations for Timberline Lodge, that it might become a great area of public recreation. In 1938, Timberline Lodge was completed and all rights were given to the National Forest Service. On February 4 and 5, 1938, it officially opened to the public as a ski resort and tourist destination.

Closed during WWII and reopened several years later, the lodge, as well as the ski facilities, fell into disrepair. However, Richard L. Kohnstamm completely overhauled the place and had it up and running with ski education programs and other activities. Kohnstamm passed away, but the lodge and ski facilities are still run by his family, Additions to the area include a convention building as well as a day lodge for skiers. Timberline Lodge was added to the National Register of Historic Places in December of 1977. The Lodge is a great place to stay on vacation or when visiting the skiing area. Guests can stay overnight in one of the intricately decorated rooms, and enjoy the fireplace in the ground lobby. Visitors can actually experience a part of history as well as the great outdoors.