The Surratt Boarding House in Washington, D.C. is one of two locations owned by the Surratts connected to the assassination of Abraham Lincoln in 1865. The Surratts were active supporters of the Confederacy. It is through them that John Wilkes Booth met several of the conspirators and worked out their plans. This boarding house is where the early plan of kidnapping the president was put together.

The Surratt Boarding House as of 2009. The "nest" that hatched the "egg" of Lincoln's assassination is now the "Wok and Roll Restaurant." Photo by Richard E. Miller on HMDB.org (reproduced under Fair Use) 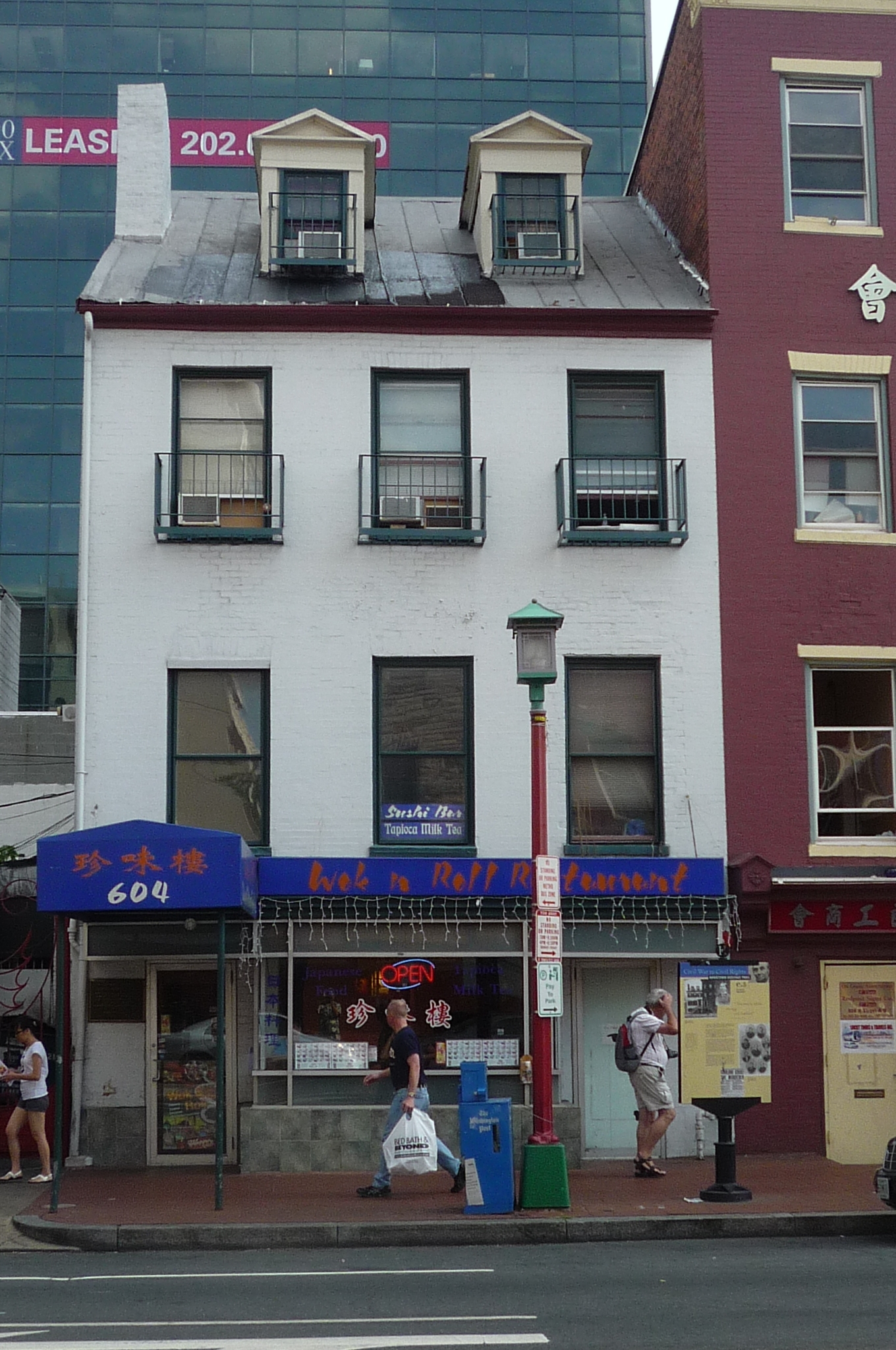 Surratt Boarding House marker on a sidewalk pole in front. Note the gallery of conspirators tried for Lincoln's murder. Photo By Richard E. Miller on HMdb.org (reproduced under Fair Use) 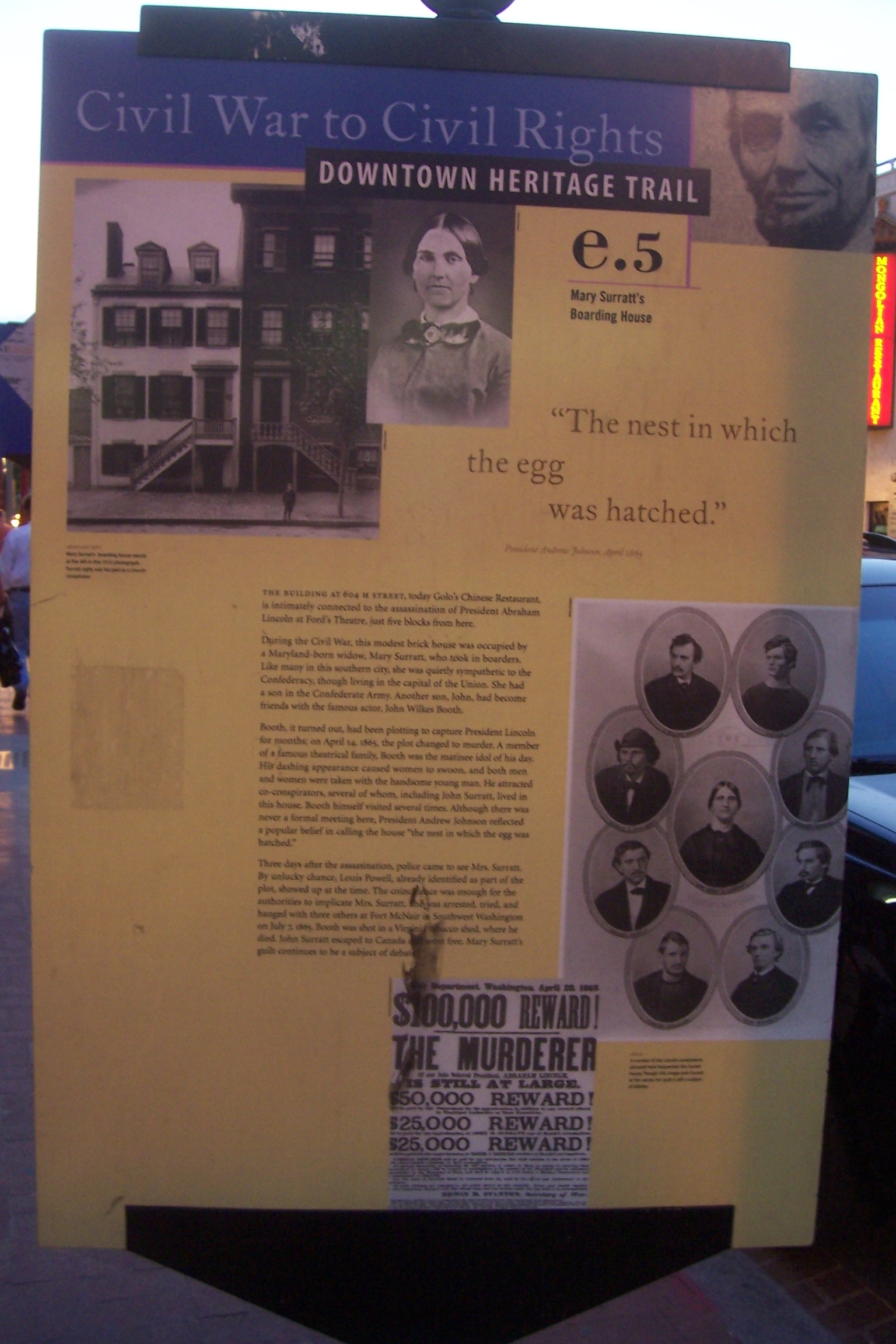 A plaque marking the site where Booth's original plan for abduction was conceived. Photo by By M. A. Pimentel on HMdb.org (reproduced under Fair Use) 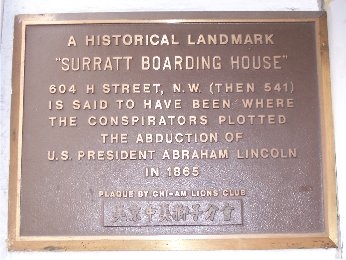 A Confederate House in a Union City

The Surratt Boarding House in Washington DC was the second home-business established by the Surratt family. The first was the Surratt Tavern in Maryland built by John Surratt, Sr. after a fire destroyed their previous home (see CLIO entry for “Surratt House Museum (Surratt Tavern), Maryland"). After John Sr. died in 1862, Mary E. Surratt rented the tavern out to another man and moved to the Boarding House with her daughter in 1864. Mary’s son, John Jr. began working as a Confederate agent (some say spy) during the Civil War. John Wilkes Booth, Confederate actor and assassin of Abraham Lincoln, became a friend to John Jr. in early 1865 and a frequent guest at the boarding house. Other co-conspirators also began visiting the boarding house. It is here, just a few blocks away from Ford’s Theatre, that much of Booth’s plotting against Lincoln was formulated.

A Base for Treason

John Wilkes Booth began his plot in late 1864. One of his earliest recruits was the Confederate agent, John Surratt, Jr., whose mother owned two buildings that could be used in Booth’s plans. The buildings were used to supply weapons, horses, and other materials. Booth’s original plan was to kidnap President Lincoln, transport him to Richmond, and force the release of Confederate prisoners. He assembled six co-conspirators: Samuel Arnold, George Atzerodt, David Herold, Michael O’Laughlen, Lewis Powell (aka Paine, Payne), and John Surratt. Their first attempt was on March 17, 1865. They would seize Lincoln during a play at a hospital. Lincoln never showed and that plot failed as did others. The surrender of Confederate General Robert E. Lee on April 9 and Lincoln’s subsequent speech suggesting rights for Blacks was enough for Booth to change his plans from kidnapping to murder. Three days later, on April 14, as part of a larger plot to replace the entire head of the US government, Booth killed Lincoln at Ford’s Theatre.

Booth escaped the capital on horse, riding hard despite his broken left leg. His first stop was the Surratt Tavern in Surrattsville, Maryland, where he changed horses, ate dinner, and received fresh weapons and other supplies. The Tavern was part of a well-known route from Washington into the deeper south where Confederates could find aid and comfort. Booth expected to be greeted as a hero, but he never got there. Slowed down by injury, Booth was surrounded and killed at Garrett’s Farm on April 26.

Fall of the House of Surratt

Immediately after the shooting at Ford’s Theatre, soldiers began an investigation and manhunt for Booth. John Surratt was a known friend of Booth’s, so soldiers searched in vain for them at the Surratt Boarding House. John Surratt lost interest in the conspiracy group and had left town days before; he was not part of the assassination plot. A return visit by soldiers on April 17 did turn up a man who matched the description of the man who attempted to kill Secretary of State Seward, Lewis Powell. Suspicious behavior by Powell and Mary Surratt led to further searches and evidence of their connection to the plot. Everyone in the house was arrested. As a result of the Lincoln assassination trials, Powell was one of several conspirators convicted and hanged. Mary Surratt was also convicted of conspiracy, despite concerns over the depth of her knowledge and degree of participation in the assassination, and became the first woman ever executed by the federal government. She too was hanged. President Johnson supported Mary Surratt’s sentence, referring to the Boarding House as “the nest that hatched the egg.” John Surratt, Jr. was caught in Egypt and tried in 1867 for conspiracy to assassinate Lincoln, but he was found not guilty and released.

The Surratt Boarding House structure still exists today. It is part of the capital’s “Chinatown” district and serves as one of the area’s Asian-food restaurants, called the “Wok and Roll Restaurant.”