The Old Stone Church is the oldest church structure in the village of Lemont. The building served as the Lemont Methodist Episcopal Church from, 1861 to 1970. In 1970 the congregation moved into its new quarters, and deeded the building to the Lemont Area Historical Society. It now serves as the Lemont Area Historical Society's museum. The Old Stone Church and Museum is an official National Landmark (it is listed on the National Register of Historic Places).. It also contains a rich collection of historical artifacts from Lemont, a city whose history is tied to Chicago and the development of the I&M Canal in the 1840s. 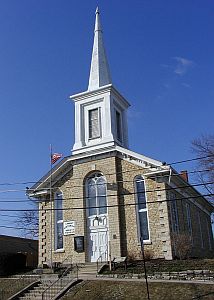 The Old Stone Church, a former Methodist church from 1861 - 1970, now serves as museum for the Village of Lemont,1 but it also represents the long history of Lemont, its ties to the I&M Canal, and the genesis of Chicago.

History of the Building2

In 1857, Methodist Episcopal congregates held Sunday School and Sunday services in the town's original town hall. In 1861, the congregation laid the Old Stone Church's cornerstone on September 14, 1861, and then opened it for services in November of that year.

The building cost $1,940 to build, is 35 x 60 feet, and is comprised of Lemont stone tailings donated by Lemont's Brown Quarry.3 The Old Stone Church design is reminiscent of small churches found in New England, which is no surprise since many settlers to Lemont hailed from the New York - New England area.

In addition to its theological usage, the Old Stone Church,

The Old Stone Church predates Lemont's official incorporation as a town. Lemont's first attempt at settlement after the displacement of Native Americans was the “paper town”4 of Keepataw,5 platted in 1836, followed by Athens in 1839. Lemont proper was not incorporated until 1873, on land previously occupied by the defunct Keepataw.6

Lemont has two histories, in a sense - one tied to Chicago and the I&M Canal and one tied to its famous, previously mentioned, quarries. Construction of the I&M Canal began in 1836 and then completed in 1848. The canal linked the Illinois River and Lake Michigan to make a direct waterway to the Mississippi River and, in a sense, connect New Orleans to New York. In an era where water navigation reigned supreme, that made Chicago and the surrounding regions a place in which to invest.

Almost all the early town migrants and immigrants arrived in order to work on the canal, as either contract holders or laborers. Contract holders mostly were comprised of Americans from New England while immigrants (Irish, German, Scandinavians, and others) dominated the unskilled workforce.  As a result, Lemont's population reached 3,000 people by 1848.7

The canal digging led to the aforementioned discovery of the highly coveted Lemont limestone.As the quarries grew, more immigrants arrived, such as Poles, Bohemians, Austrians, and Italians, who also worked as low-paid laborers and in typical 19th century fashion, enjoyed many skirmishes with quarry owners. Indeed, in 1885, a strike resulted in the arrival of the Illinois Militia for the intentions of breaking it, resulting in three deaths and many injuries -- more died shortly thereafter in another skirmish.

By the 1890s, Lemont had grown to more than 10,000 people, much of that due to mining and quarrying. The downtown region, not far from Old Stone Church, gained fame for its "Smokey Row," an area dominated by taverns and brothels that was generally regarded as one of the least "moral" places in the country.

Over time, settlers remained and formed a village that had less to do with quarrying and more to do with building a community. The Old Stone Church represents one of the many places that served as a place for forging a community.

3 Lemont's most famous resource was its quarries, used for the building of the I&M Canal, local buildings, and later exported. The rock, Niagaran dolomite, is easily workable. In fact, Chicago's famous Water Tower that survived the Great Chicago Fire is built of this stone.

4 Paper towns, in essence, were fake towns created by those looking to claim an area when one did not exist.

5 Today, one can visit Keeptaw Forest Preserve, or attend Keeptaw Days' celebrations (although funding for this event has temporarily ceased) and Keeptaw Parades. The name lives on, despite its "paper town," beginnings.