Believed to be the city’s oldest statue, this sculpture was erected by the Dallas chapter of the Daughters of the Confederacy in 1896. This sculpture was designed by a German immigrant who specialized in working with bronze and granite. It is located within the Pioneer Park Cemetery, a collection of four graveyards that contain many important figures from Dallas’s history, stretching as far back as 1853. The statue demonstrates a transition in the types of monuments created by Confederate supporters. In the years following the war, Confederate markers and monuments were located in cemeteries and honored the dead. In the late 19th and early 20th century, however, Confederate monuments presented a celebratory history of the "Lost Cause" and were placed in prominent public places to send a message about the South's refusal to accept the consequences of defeat and Reconstruction. Such monuments were political in nature and designed to erase the history of the South's defeat and occupation by Northern armies. Similar to the early monuments, this work is located in a burial ground. Demonstrating elements of later monuments, it also presents Confederate soldiers on pedestals. Many of the monuments dedicated in the next two decades placed Confederate leaders in larger-than-life poses atop horses--monuments that were similar to those created for conquerors and victors.

The monument as it appeared at the turn of the century 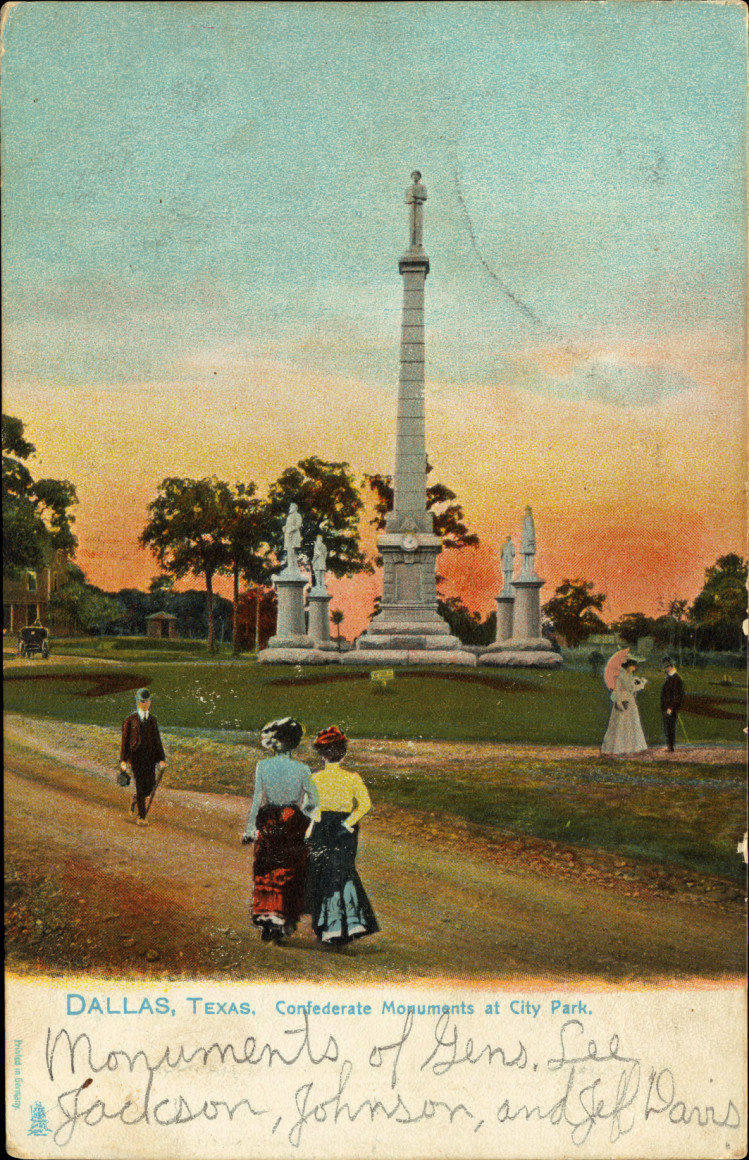 The monument as it appears today 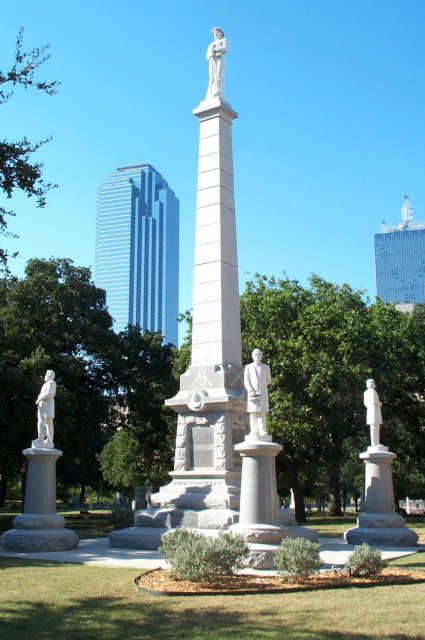 The monument consists of a sixty-foot granite obelisk surrounded by four statues. The stone was quarried in Llano, Texas, apart from the marble of the statues, which was imported from Carrara, Italy. Atop the columnn is a figure of a Confederate Soldier, possibly Lieutenant Robert Hickman Gaston who was killed at the Battle of Sharpsburg. One side of the obelisk features the main dedication plaque, bestowing the monument to the “brazen lips” of the Confederacy. The other three faces of the columnn pay homage to the cavalry, infantry, and naval soldiers of the Confederate army. Each is given a poetic inscription and engraving of crossed swords, an anchor, and crossed rifles, respectively. An additional inscription lies on the north face, below the dedication to the Navy. It reads: “This stone shall crumble into dust ere the deathless devotion of Southern women be forgotten.” On the south side of the obelisk is a relief bust of General William L. Cabell, a Civil War veteran and mayor of Dallas. Four other statues are positioned around the central pillar. These are of Albert Sidney Johnston, Robert E. Lee, Stonewall Jackson, and Jefferson Davis.

The memorial was originally located in the Sullivan Park, now known as the Old City Park. Its installation in 1896 was quite a small event, with only four hundred Confederate and under sixty-five Union veterans in attendance; however, when the monument was officially dedicated the following year, over forty thousand people crowded into the park. Amongst those in attendance were Stonewall Jackson’s widow, Mary Anna Morrison Jackson, and Jefferson Davis’s daughter, Margaret Howell Davis Hayes. In 1961 the monument was moved to its current location in Pioneer Park, as the R.L. Thornton Freeway was being built near its previous position.

In recent years, many Americans have become increasingly concerned about the intent behind the creation of monuments honoring the Confederacy. In many cases, the monuments were made decades after the war by individuals who subscribed to some of the same racial prejudices that typified white Southerners who fought on behalf of the Confederacy. In response to the 2015 attack in a South Carolina church against African American parishioners by a neo-Confederate supporter, many city governments have contemplated removing Confederate monuments. The debates have often spurred violence against property, with monuments being vandalized by opponents while a small number of Confederate supporters have made violent threats against those who support the removal of the monuments.

Butler, Steven. "Confederate Monument." A Guide to the History of Dallas, Texas. http://www.watermelon-kid.com/history/dallas/landmarks/landmarks-Confederate.htm.