Carlisle Barracks is a historic training facility and home to the Army War College. The second oldest active military base, Carlisle Barracks was established in 1745 when British soldiers created the camp to house soldiers on the colonial frontier. In December of 1776, the Continental Congress authorized the establishment of an ordinance training center at this location.

One of several historic buildings at Carlisle Barracks, Quarters 2 was originally constructed in 1821 and destroyed by Confederate forces in 1863. The present structure was completed in 1864. 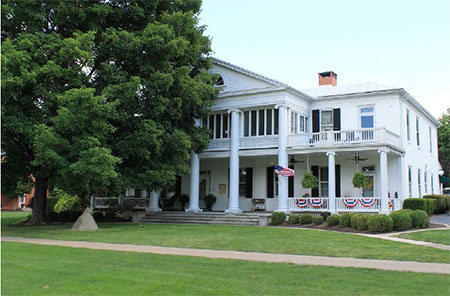 In May 1757 Carlisle preceded a more permanent settlement when Colonel John Stanwix marched upstream with British regulars and provisional during the French and Indian War. After the Revolutionary war the town of Carlisle was signified as the frontier gateway, because a greatly increased wave of land-hungry migrants moved west. During the war numerous brick buildings were erected at Carlisle Barracks for military stores. The building's were also erected to accommodate workmen of the revolutionary government's dedicated managing body for the army (the Ordinance Development).

Carlisle Barracks became the center of intense military activity with outbreak of the Whiskey Rebellion in 1794. This crisis was posed by farmers who refused to pay taxes on commercial whiskey they distilled from their corn crops. They found out that corn processed as alcohol was easier to be transported east over the allegiances and more profitable than com was as grain. The protesters used violence and intimidation to prevent the officials from collecting the taxes. The whiskey tax was repealed when Thomas Jefferson came to power in 1801.

The School of Calvary Practice was established at the Barracks in 1838. It was the army's small elite mounted force. The forerunner of the armor school is now at Fort Benning, Georgia. Captain E. V. Summer found most of the buildings of the barracks in disrepair and the horses in short supply. To overcome these problems he drilled his recruits double time on foot to stimulate the trotting of the missing horses. Horse-Drawn Light Artillery also established it's school at the Barracks. Captain Samuel Ringgold arrived to begging training recruits and testing equipment for the "flying artillery" in 1839.