The Museum of Russian Art

Founded in 2001, the Museum of Russian Art (TMORA), is a member-supported nonprofit organization dedicated to the preservation and presentation of all forms of Russian art and artifacts. The only North American museum of its kind, TMORA features a dynamic rotation of originally curated exhibitions showcasing extraordinary works of art seldom displayed in the United States. Through the Museum’s educational programs and diverse exhibitions, visitors can explore new perspectives on the history, heritage and art of Russia and surrounding cultures. The museums's collection is comprised of paintings, photography, lacquer art, porcelain, textiles, prints, and other forms of art. 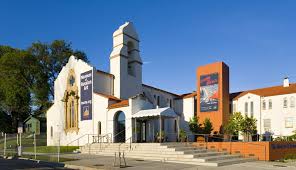 The museum was founded by Raymond Johnson and his wife, both of whom began collecting Russian since for many decades. In 1991, they put on an exhibition of Russian impressionist paintings. By 2001 they had the largest known collection of Russian Realist paintings outside of Russia. They decided that it was best to showcase this collection and founded the museum, which was originally located in Bloomington (it opened in 2002). The museum was moved to the current facility in 2005. The building is a former Congregational church built in 1925; it was also a funeral home.