This statue in Carlisle's Old Public Graveyard honors Mary Hays McCauley, a legendary heroine of the Revolutionary War known for her efforts to support patriot artillerymen by bringing water needed to cool their cannon in the midst of a battle. Historians have numerous theories about the true identity of the woman who became "Molly Pitcher," including the likelihood that the legend of Molly Pitcher became a composite image of many women, including Mary Hays, who assisted soldiers in the midst of battle at great personal danger.

Photograph of the Molly Pitcher statue at her grave in Carlisle, Pennsylvania. 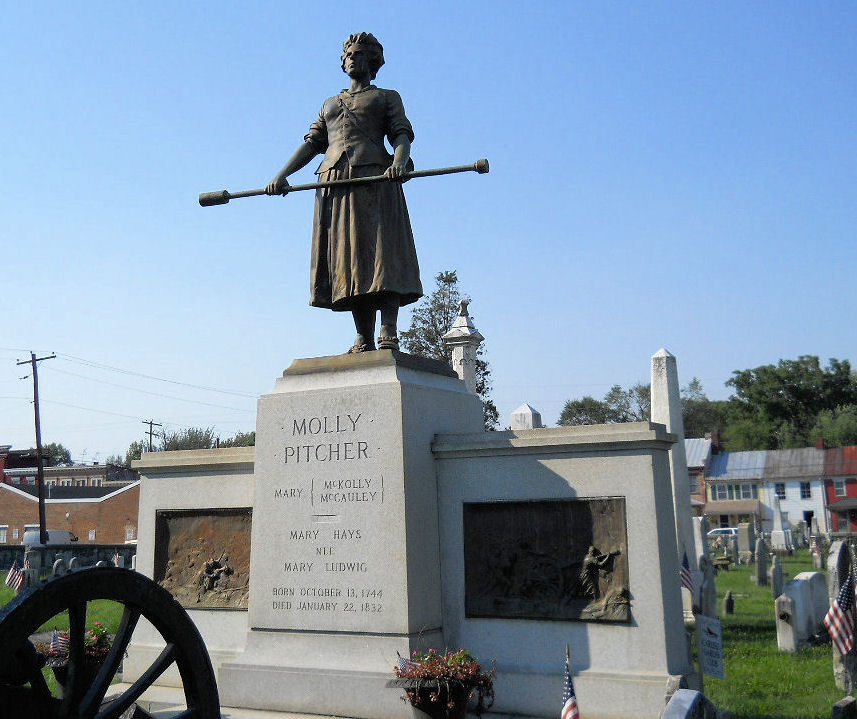 Molly Pitcher also has a historical marker in Manalapan, New Jersey, near where the Battle of Monmouth took place during the Revolutionary War. 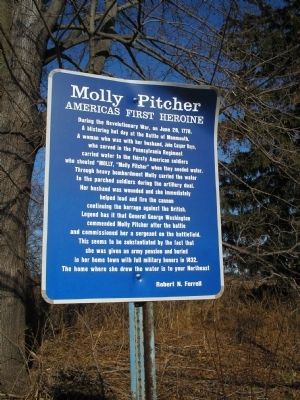 Revolutionary war heroine, Mary Ludwig was born in Pennsylvania to a German family. She was sent to Carlisle to become a servant at Colonel William Irvine's home. She married a barber named William Hayes who lived in the village in 1769. Her husband enlisted as a gunner in Captain Thomas Proctor's 4th Pennsylvania Artillery in 1775. The 4th Pennsylvania Artillery eventually becomes the 4th Continental Artillery. Her husband spent the winter of 1777 and 1778 at Valley Forge.

Mary Hayes, like many other soldier's wives, joined her husband in the camp. She helped in assisting in bringing water to use to cool the artillery pieces when in use. That's probably where she got the nickname "Molly Pitcher" from. She joined the other wives in cooking, washing, sewing, and other things in the camp. In June 28, 1778 William's job was to load the cannon wielding a ramrod. It was told Mary was one of the women who brought water to the artillery men so that they could cool the cannon after each shot. Without this water, the cannon would overheat and explode, killing the men who fired the gun, eliminating one's own artillery, and likely endangering the entire army.

On that hot day Mary was carrying water and saw her husband collapse. Whether it was from the heat or a wound is not clear, but he was certainly not killed. She stepped in to clean the ranked and loaded the cannon by herself. She continued this until the end of the battle that day. One variation of the story said she helped her husband fire the cannon. Mary was almost hit by a musket or cannon ball that sped between her legs and ripped through her dress in the oral tradition of the story. "Well that could have been worse", was told she had responded. George Washington supposedly seen her action on the field. After the British retreated unexpectedly the next day, he made her a non-commissioned officer in the army for her deed. She apparently started calling herself sergeant Molly from that day on.

After the war they returned to Carlisle and had a son named John L. Hayes in 1780. Mary continued to work as a servant. She was widowed in 1786 and later in the year she married John McCauley or McCauly. The marriage was not successful John was a stonecutter and a friend of her late husband and was apparently mean to her and didn't support her or her son. She either left him or he died or disappeared around 1805. Mary continued to work as a servant around town, and got the reputation of being hardworking, eccentric, and coarse. In 1832 Mary Ludwig Hayes McCauley (Sergeant Molly) died, her grave was unmarked and her obituary didn't have any military honors or specific war contributions. In 1856 her son John Hayes died his obituary noted that he "was the son of the ever-to-be-remembered heroine, the celebrated 'Molly Pitcher' whose deeds of daring are recorded in the annals of the Revolution and over whose remains a monument ought to be erected."

Image by Bill Coughlin on The Historical Marker Database.