Designed by architect Elmer Behrns, this historic theater opened in 1924 and featured silent movies and the occasional live show during its early years. Five years later, managers invested in the latest "talkie" technology, purchasing and installing Vitaphone and Movietone equipment. The theater survived the Depression years and its owner continued to invest in the facility, with upgrades to the exterior that included an Art Deco marquee in 1938. Similar to other theaters located in the heart of small towns and large cities alike, the theater faced competition to suburban multiplexes in the 1970s. The theater fell into disrepair in these years, but was saved and restored by concerned residents and private investors in the early 1990s. In 2004, the theater received a historical marker from the Elmhurst Historical Museum that appears on the exterior of the building and tells some of the story of the building and its importance to Elmhurst residents throughout the 20th century and beyond.

The York Theatre has been restored and continues to offer a mixture of live performances, community events, and motion pictures. 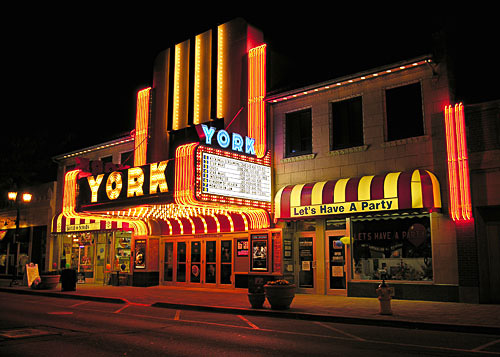 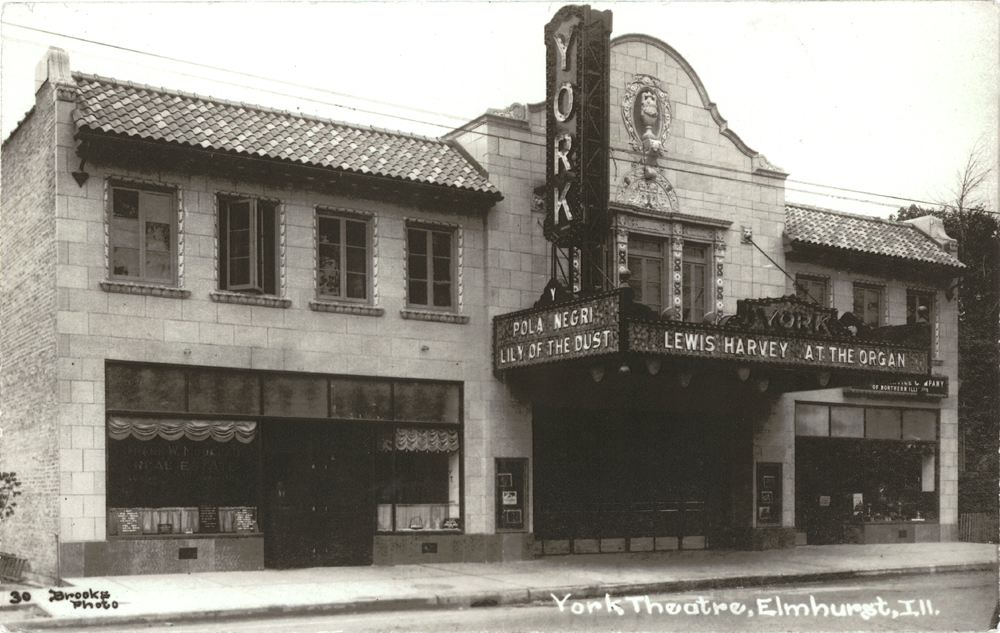 During the "Roaring Twenties," Americans flocked to theaters as films transitioned from silent to possessing music and dialogue; the birth of the modern "movie" took place during the 1920s.1 In fact, Walt Disney got his start during the 1920s. The York Theater, which opened its doors on Labor Day, 1924, serves as a physical reminder of that era. Unlike today's multiplexes and cookie-cutter designs, theaters during the Interwar Period usually included a sense of grandeur. The York Theater building was designed by noted theater architect Elmer Behrns, featuring a Spanish motif as well as a $20,000 Barton pipe organ.2

In 1938, architect Roy Blasé updated the York Theater decor.  Typical of the 1930s,3 Art Deco and modern styling replaced the original Spanish decor, including the marquee, In its place, 1,000 light bulbs adorned a stainless steel and porcelain high-rise marquee. As well, neon lighting on the canopy illuminated the sidewalk in front of the theater.

Classic Cinemas acquired the York Theater in 1982. In 1991, the new owners began an extensive renovation project, which included an effort to  preserve many historic elements within the main auditorium such as the proscenium arch and stage, as well as the Spanish-style organ grills. Also, "The interior of the theater was returned to its original Spanish décor. The light fixtures, which had graced the walls of the original theater were cleaned, re-polished, and now hang in the lobby and two of the smaller auditoriums."4 Moreover, an architectural dig led to the discovery of the theater's original orchestra pit. Today, a two-manual seven-rank Barton pipe organ -- originally installed in the Rialto Theater in Champaign, IL in 1925 -- sits in that pit.5

Over the years, the theater has expanded to both meet the needs of modern movie-goers and to preserve its history.  In September, 2004, to commemorate its 80th anniversary, the Elmhurst Historical Museum presented the York Theater with a historical marker that can been seen on the outside of the building. In addition, theater-history aficionados can visit the museum and archives of the Theatre Historical Society of America on the building's second floor. While there, one can enjoy "free admission to a gallery featuring changing exhibits and artifacts from the golden age of American Movie Palaces."6

Although modern movies and stadium seating exists in York Theater today, the preservation of historical features provides a window to the past.