In 1993, local residents hauled sixty-five tons of coal into the city of Williamson, West Virginia. This coal was not used for the production of heat or energy. Instead, residents built blocks of coal and used these to form walls that were two feet thick. These coal walls now house a local history museum within the Williamson Coal House. One of the region's most unique landmarks, the "House that Coal Built" is now a local history museum with exhibits that feature local artifacts. The building also serves as a symbol of the community and reflect the pride of many area residents who are descendants of coal miners.

This local history museum was built in 1993 using blocks of coal. 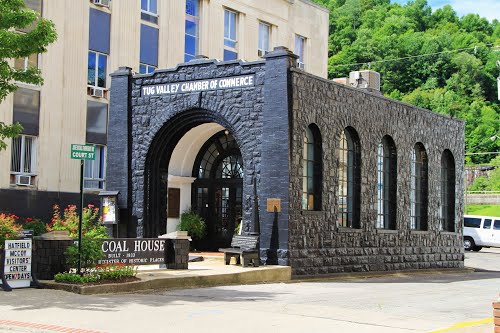 The Coal House stands in Williamson, WV- which was incorporated in 1892. Coal was the driving force of the economy in that area, widely known as the "coal fields". So, it is obvious that Williamson's history would revolve around coal production and transportation; this history eventually lead to the building of the Coal House, which serves as a way of honoring and remembering it. Historians say that Williamson was named in honor of Wallace J. Williamson, one of the early settlers of the valley. Much of the region, including portions of southern West Virginia and eastern Kentucky, centered around downtown Williamson. At the time, the Norfolk and Western Railroad (now Norfolk Southern) had a major railroad yard located in the East End of town that brought in a lot of business and money for the city. Williamson evolved over the years and became the "Heart of the Billion Dollar Coalfields".

In 1931 O.W. Evans, Manager of the Norfolk and Western Railroad's Fuel Department in Williamson, had the idea of building a structure entirely of coal in order to symbolize the dominance of coal in the region. Mr. Evans organized a campaign that eventually bore fruit with the completion of the Coal House in 1933. The house was constructed under the supervision of a local architect named H.T. Hicks by using 65 tons of bituminous coal mined in the local area and donated by several large coal companies. Also, much of the labor and materials was donated by local workers and citizens. At the time of its construction it was the only structure built of coal in West Virginia- now, there is another house found near Lewisburg. Housing the Tug Valley Chamber of Commerce, the Coal House stands on a lot immediately adjacent to the Mingo County Court House, symbolizing the vital link between the coal industry and the life of Mingo County.

According to the description found in the National Register of Historic Places, the coal was cut into random size blocks and laid in random range. The outside surface is still intact due to coats of waterproofing varnish applied to protect the coal masonry from deterioration. All the openings in the building, windows and main entrance, are arched. The entrance door itself is a large double door surmounted by a large fanlight and flanked by sidelights. The entire building rests on masonry blocks, set on concrete footing. The two-feet thick walls of the house are also capped with stone coping. In October of 2010 the Coal House caught fire, causing extensive damage to the interior of the building, but minimal damage to the exterior. The building was safely renovated at a cost of around $200,000 and the inside of the building has been updated with a more modern interior design. However, according to Mandi Cardosi, the wood floors still creak and slant due to the various floods that have found their way into the building. This is now preventable because of the large flood wall that encompasses the city.

An unusual aspect of the building, and one that sets is apart from most public buildings in West Virginia, is the bronze plaque on the outside of the Coal House that not only lists the architects and major sponsors, but names every local company, businessman, mason, carpenter, and laborer who worked on the building. The Coal House was truly a community effort as few public buildings are, and is today on of the major objects of interest and community pride in Mingo County, West Virginia.