Built in 1934, this school house served Native American children exclusively from 1934 until 1940. It's architecture is unique for this type of building--a Colonial Revival Style with Adamesque features--the only school built by the United States Bureau of Indian Affairs with this design. The school also doubled as a community center for the city of Douglas. It is the only BIA Native School left in this area. The building was added to the National Historic Registry in 1988. In 1994, the school began to function as Montessori school called Juneau Montessori School

The Mayflower School today as the Juneau Montessori School 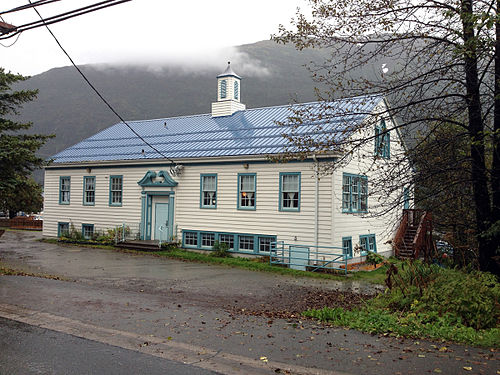 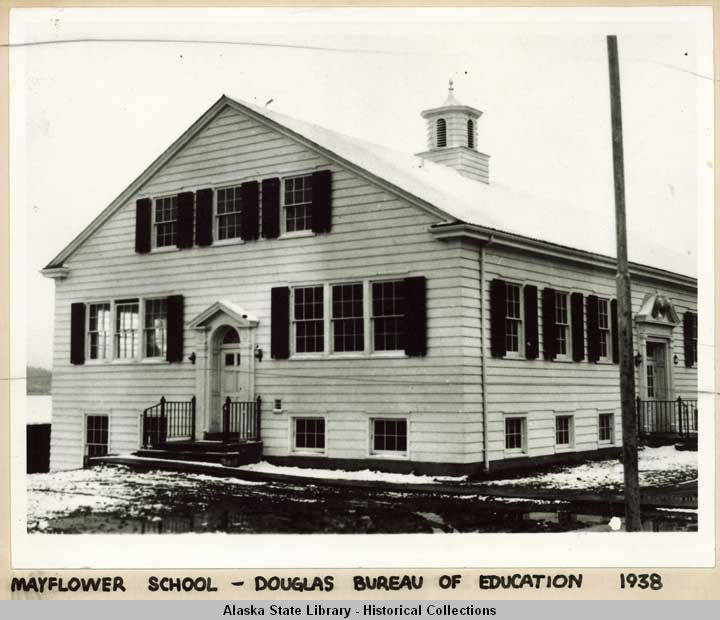 This structure possesses a gabled roof and is two and half stories. Significant features of the Colonial Revival movement adorn the school, such as the basi, but still distinct cornice detailed pediments, the door in the center of the building aligned with the double hung sash windows, and pilasters1.  This beautiful building was designed by local architect and superintendent of the BIA for the area,  N. Lester Troster, at the cost of $9,500 to the United States Bureau of Indian Affairs1. The school would educate the local Native American children and provide a community resource for the Tlingit Native Americans that have been settled in Juneau for centuries1. (To learn more about the Tlingit Tribe and their experiences in Southwestern Alaska, please see the documentary in the "Links" section).

Although, the history of Native American schools far precedes 1926, this is a pertinent year in the timeline of the Mayflower School, because a fire scorched the city of Douglas and destroyed the homes of 300 people--150 of whom were Native American, and another casualty was the BIA Native American School built in 19021 2. For eight years until 1934, school children and teacher Rose Davis were without a proper school building and traveled to various locations to hold class1. Finally, the U.S. Bureau of Indian Affairs allocated money to five different cities, including Douglas, to build new schools, a $175,000 Public Works Administration grant supplemented the $30,000 that the tribes offered1. During this period, Congress passed the Indian Reorganization Act of 1934, which recognized Native Americans' ability to self-govern in their tribes and also tried to mediate the issues brought up in the Merriam Report: such as poverty, assimilation or poor treatment in boarding schools, rampant illness, and land appropriation by the federal government3.  The school was meant to be a example for all other Native American schools by focusing on vocational skills like working with textiles such as rug making, woodworking, and taxidermy1. The school also had appropriate classroom furniture: chairs and desks for the students to use, rather than benches1. The school, as it was also a community center, boasted a kitchen, library (opened after hours for evening use by the community, recreational room complete with basketball hoop, and a laundry area1. Rose Davis, loyal teacher for two decades oversaw all of the use of the facilities at the school. Community meetings of the Alaska Native Brotherhood and the Alaska Native Sisterhood were held at the school, as well as the Douglas Indian association, which commenced in the recreation room1.

After the school system for Native Americans was combined with the rest of the US public school system in 1948, the decision to consolidate the school systems of Douglas and Juneau was made in 19551. The Department of the Interior conveyed the school to Douglas in 1963 or 19644. In 1993, the City and Burrough of Juneau Assembly provided the funds to rehabilitate the school and lease it to the Montessori school as a new school building, which opened as Juneau Montessori School in 1994 that remains today5. In November 2003, a five foot tall cupola was replaced on the roof of the school after beginning construction in 1999 for the remodel5.