The controversial bronze statue of Vladimir Ilyich Lenin in the Fremont neighborhood of Seattle was designed by Emil Venkov. Originally placed in Soviet Chzekoslovakia, it was toppled just a year after installation during the 1989 revolution. The statue was found in a muddy scrap heap in Poland by American teacher Lewis Carpenter, who mortgaged his home to buy Lenin and bring him to Fremont. The neighborhood's love-hate relationship with the statue remains hotly contested [1; 2]. 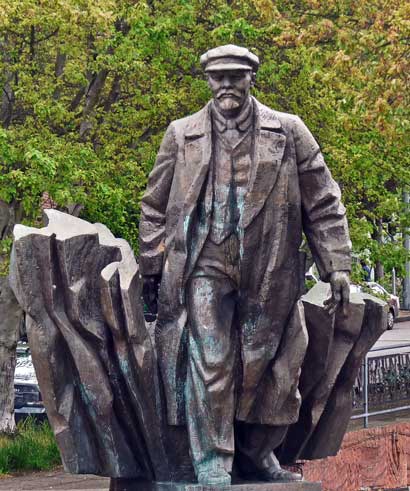 The controversial bronze statue of Vladimir Ilyich Lenin in the Fremont neighborhood of Seattle was designed by Emil Venkov. Originally placed in Soviet Chzekoslovakia, it was toppled just a year after installation during the 1989 revolution. The statue was found in a muddy scrap heap in Poland by American teacher Lewis Carpenter, who mortgaged his home to buy Lenin and bring him to Fremont. The neighborhood's love-hate relationship with the statue remains hotly contested [1; 2].

Venkov's 16-foot, seven-ton statue of Lenin was erected in Poprad, Slovakia in 1988, and may be the only portrayal of the Bolshevik Revolutionary surrounded by guns and flames (he is normally depicted as friendly or intellectual). The statue was toppled the following year when Czheckoslovakia revolted against the Soviet government, and ended up in the mud in Poland, where it was found by Lewis Carpenter, an American teaching abroad at the time. Taken with the artistry of the piece, Carpenter mortgaged his house in Issaquah, Washington in order to bring the statue home, with the idea of showcasing it in a Slovakian restaurant. However, Lenin's rescuer died in 1994, and his family and the community of Fremont agreed to display the statue as public art until a buyer could be found (the price is $250,000 or best offer, according to the Fremont Arts Council) [1; 2].

The Fremont neighborhood is home to over 60 art installations, so in a sense Lenin fits right in; on the other hand, many object to or are offended by the statue's presence and the things it represents: Soviet oppression, violent revolution, Communism, etc. The hands and mouth of the statue are frequently painted red by vandals, and there is even a citizen-run Facebook page promoting the statue's removal by the City of Seattle. Nonetheless, the statue is a fixture of the Fremont community—though probably not in a way of which Lenin would have approved, as he stands in a capitalist business district and is often dressed up or decorated, being wreathed in lights at Christmas, dressed in a tutu for gay pride events, given a tinfoil-wrapped burrito to hold by the nearby Taco del Mar restaurant, and dressed up as the Beatles' John Lennon [1; 2].

Seen by most as one of the most controversial art pieces in Fremont; the sculpture of Lenin reminds us that art outlives politics — a stalwart reminder of egregious policy not to be repeated.

One of A Kind
Weighing over 7 tons, the sculpture, designed by Slavic artist Emil Venkov, took ten years to complete and was installed in Poprad, Slovakia in 1988, only to be toppled by revolution in 1989. It is unique; we believe it is the only representation portraying Lenin surrounded by guns and flames instead of holding a book or waving his hat. The sculptor, while fulfilling the requirements of his state commission, was nevertheless able to express his vision of Lenin as a violent revolutionary, not just as an intellectual and theoretician.

History of Lenin in Fremont
Lewis Carpenter
While teaching in Poland, American veteran Lewis Carpenter discovered the sculpture lying face down in the mud. Carpenter recognized the skill and craftsmanship of Venkov, as well as the boldness of his portrayal. Determined to preserve the statue, Carpenter mortgaged his house to acquire it and brought it back to his home in Issaquah, Washington.

Carpenter had dreams of making the statue a centerpiece for the Slovakian restaurant he wanted to open. Instead, he died in a car accident in 1994, leaving his debt and the disposition of the statue to his family. They settled upon an agreement with Fremont community representatives to site the sculpture here for the work to be seen and enjoyed, as Carpenter wished, and hopefully to find it a permanent home.

Originally, the sculpture came to reside in Fremont near the northwest corner of Evanston Ave N & N 34th St (currently the Red Door Alehouse), on a parking lot used as overflow for Fremont Sunday Market vendors. Record winter rainfall, in 1996-7, caused the ground under the parking lot to destabilize. Structural engineers advised the property owner that removing the 8-ton bronze paperweight would effectively prevent a slide. Eventually, the property would be fully reinforced when the Red Door located there in 2001.
Still promoting the temporary nature of the exhibit, and its future replacement with other large art works for purchase, local artists and activists convinced another property manager to allow installation of a permanent pedestal on which to display art, beginning with Lenin. Fortunately for Fremont organizers, the Mayor of Seattle, Paul Schell, came through the neighborhood the day of the cement pour and signed his name to the pedestal project. The 16-ft (5m) sculpture relocated to this site in 1997, awaiting a buyer.

Is Lenin for Sale?
At its original installation, in 1995, the statue carried a sign asking for $150,000, Or-Best Offer. In 2001, the price reportedly had gone up to $250,000. In 2008, the agent for the Carpenter family reported that the price had, inexplicably, increased to $300,000. Offers buy the sculpture to melt down the bronze have been refused. Still owned by Lewis Carpenter’s family, the family is still considering offers for sale and a permanent home for this controversial piece.

Lenin - Right Or Wrong?
The mere presence of this sculpture evokes very strong reactions. If artists seek to create emotion and reaction, Venkov and the Fremont community can claim success almost daily. Many recall the sufferings caused by Lenin’s policies, and see the statue as an affront, while others celebrate the triumph of capitalism and whimsy over Soviet oppression.

The sculpture, and its installation here, continually launches dialogues about history, art and the differences between Lenin, Stalin and John Lennon (although even when masked with the features of the beloved Beatle, Venkov’s sculpture really can’t pull a resemblance.)

Lenin, even in bronze and often decorated with little regard to the dignity of a dead stator, continues to cause controversy.

Erected by Fremont Chamber of Commerce [2].