This was the site of Fairchild Semiconductor Corporation where engineer Robert Noyce explored the concept of using tiny wires to connect transistors within layers of silicon to create an integrated circuit that could be produced efficiently and on scale for commercial applications. Noyce built upon the work of others devising a silicon "chip" that held multiple circuit. The innovation led to the rise of the semiconductor electronics industry in the region. Today, integrated circuits are commonly referred to as "silicon chips" and found in nearly every electronic device.

The marker is located outside the former home of Fairchild Semiconductor Corporation, now home to a company called Collective Creations. 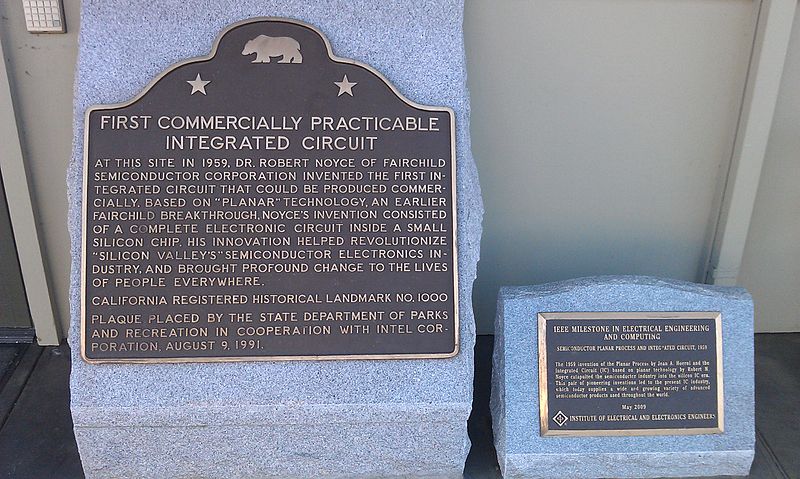 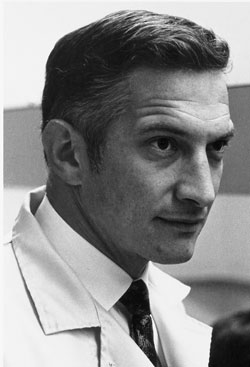 In 1953 the MIT faculty had begun to understand the importance of transistors. Noyce, a grad student at the time, went to work for Philco in Philadelphia, who was deeply involved in semiconductor research. However, Noyce remained interested in the work accomplished at Bell Labs and that of William Shockley. That relationship sent Noyce on a path to his own company, where he helped invent a chip that spurred the technological revolution and the creation of Silicon Valley, which had a profound effect on the world's technology, culture and environment.
As early as 1939, Shockley had developed the theory and framework for research into solid-state semiconductors, but he had also originated the junction transistor, which allowed for the device to become a usable item. By 1955 Shockley had left Bell and returned to Palo Alto, California to start his own Semiconductor Laboratory company, with start-up money provided by Arnold Beckman of Beckman Instruments. Aside from clerical and maintenance personnel, most of the employees consisted of electrical engineers with doctorates; Noyce joined the company in 1956.
Later that year, Shockley was informed that he had won the Nobel Prize in Physics on November 1, 1956, for the invention of the transistor.
The award proved to be a testament to Shockley's ability as a physicist and engineer but managing young Ph.Ds proved to be a daunting task for the Nobel winner; they also wanted to achieve goals that might one day result in their own Nobel awards, including Noyce. Some of the young physicists also found Shockey's management style unsatisfying. But, the real tipping point for Noyce involved a difference in idea; Shockley wanted to pursue research into the development of a four-layer diode whereas Noyce, along with Gordon Moore and Jean Hoerni, remained focused on transistors. Noyce had been introduced to the transistor not by Shockley but by John Bardeen, via Grant Gale, back in Noyce's hometown of Grinnell, Iowa.
In the summer of 1957 Moore, Hoerni, and five other engineers sought to develop a new business venture, one that had a profound effect on the work environment of Silicon Valley for decades to come, but also throughout the country, if not the world. Rather than invest in a traditional factory-style plant with all its costs, they realized they only needed a building big enough for worktables, a few kilns, and items such as goggles, microscopes, and small tools.
Although Noyce resisted joining early on, the seven convinced Noyce, then twenty-nine years old, to join as its administrator. Rather than managing in the traditional sense, he wore lab coats (instead of a suit and tie) and coordinated with teams. The freedom to create proved paramount in the work environment.
Fairchild Camera and Instrument gave the defectors the money to start up the new company, Fairchild Semiconductor, with the understanding that Fairchild Carnera and Instrument would have the right to buy Fairchild Semiconductor for $3 million at any time within the next eight years.
Noyce, Gordon Moore, Jean Hoerni and the other five defectors set up Fairchild Semiconductor in a two-story warehouse building some speculator had built out of tilt-up concrete slabs on Charleston Avenue in Mountain View, the northern end of the Santa Clara Valley, about a 1.25 miles from Shockley's operation.
The valley already boasted of companies such as General Electric, IBM, a newly created Hewlett-Packard. Moreover, Stanford University had begun encouraging engineering concerns to locate near Palo Alto and use the university's research facilities.
IBM had a facility in the valley that was devoted specifically to research rather than production. Both IBM and Hewlett-Packard were trying to develop computers. Shockley had been the first entrepreneur to come to the area to make semiconductors. However, the defections spelled the end for his project, leaving the field to Noyce and the others at Fairchild.
The impending space race between the USSR and USA boasted Fairchild's chances of success; a growing need for transistors and computers quickly materialized because old vacuum technology proved to be insufficient. The race was on to manufacture the best possible transistors and computers, both at Fairchild and around the country at places like Motorola and Raytheon.
Noyce had figured out a solution that genuinely changed history; he figured how to integrate transistor technology with the use of silicon, removing the need for wires, thus creating an entire electrical system and circuity on a wafer or chip.  However, it also came to be that Texas Instruments (TI) had also developed the same theory. In fact, Jack Kilby at TI designed the first chip model, but Noyce's invention proved to be more efficient and viewed as superior.

Over time, TI actually proved more economically successful as it continue to develop chip technology. Noyce stayed with Fairchild until 1968, when he left with Gordon Moore to found Intel.  There, he helped oversee the invention of the microprocessor. And with that invention, the world of computers and eventually the 21st Century reliance on everything from smartphones to military technology emerged; the age of the computer was at hand.

The development of Silicon Valley also evolved as a result of Noyce's work, with companies like Apple and Google serving as the modern-day versions of Standard Oil and Union Pacific Railroad.  And. just as the Gilded Age had its many negatives, the Computer Age also has harmful byproducts, including the fact that Silicon Valley is now home to more toxic Superfund sites than anywhere else in the country. The chemicals used in cleaning chips have adversely affected the soil and water in ways that may last for centuries.
On the other hand, Noyce also introduced the casual working atmosphere that not only became a staple of Silicon Valley industries, but reverberated throughout the country -- and eventually the world. The combination of new management styles and technology moved many corporations away from the standard management tree and reliance on large brick and mortar business hubs, allowing employees more freedom to create, including working in locations not away from the office.
Appropriately this historical marker was financed by Intel, where Noyce had moved to in 1968 after leaving Fairchild.

Madrigal, Alexis. "Not Even Silicon Valley Escapes History A revolution began here. And this is what is left over.." The Atlantic. The Atlantic, July 23, 2013. https://www.theatlantic.com/technology/archive/2013/07/not-even-silicon-valley-escapes-history/27782...