Constructed between 1884 and 1922, the Winchester Mystery House is an enormous Victorian-style mansion in San Jose. It was built by Sarah Winchester, who was the widow of William Wirt Winchester, who was the son of the maker of the Winchester rifle. The house is significant not only for its size, but the fact that it was built without any plan to speak of. It is essentially a labyrinth of hallways and rooms sometimes with paths that lead to nowhere. In fact, the house is so massive and confusing that tour guides adamantly warn visitors to stay with the group or they may be lost for hours. The house is believed to be very haunted; some of the ghosts are considered those killed by the Winchester rifle. Tragically, Sarah's daughter and later, her husband, died which caused her tremendous mental and psychological anguish. Sarah would hold seances to try to receive inspiration about how to design the house. Despite the house's paranormal character, it is a great example of Victorian architecture albeit an extremely haphazard one. 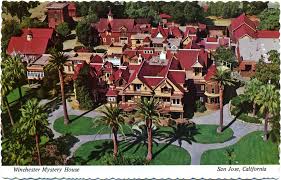 Sarah Winchester was born Sarah Lockwood Pardee as the daughter of Leonard Pardee and his wife in the summer of 1839 in New Haven, Connecticut. She married William Wirt Winchester, who is the son of Oliver Fischer Winchester. Will’s father was the former Lieutenant Governor of Connecticut and the main manufacturer of the famous Winchester rifle in 1862. Oliver passed on his company to his son after his death in 1880, but his son would die the following year from a tuberculosis illness. Sarah and Will appeared to have a happy and comfortable life when they had their daughter Annie. However, tragedy struck when Annie contracted a mysterious childhood disease marasmus and died in 1866. Both of these deaths were very tragic to Sarah and hit her really hard.

Following the death of her husband, Sarah inherited most of his money which came out to over $20 million dollars. In the process, she gained partial ownership over the Winchester Repeating Arms Company which gave her some extra pay and income. She would use this wealth in order to construct the house she envisioned. The tragic losses she suffered helped explain the instability of Sarah's mental state while designing her new home. The design called for things such as upside down columnns in an attempt to confuse spirits. Sarah was under the belief that the victims that suffered death at the hands of the Winchester rifle were coming back to haunt her.

The house was completed in 1886 and was a massive accomplishment. Originally, it was seven stories tall, but after an earthquake in 1906, only four stories remain after that natural disaster. It now has approximately 160 rooms. Those rooms include: 40 bedrooms, 2 ballrooms, 47 fireplaces, 17 chimneys, 2 basements, and 3 elevators. With the devastation that she encountered coupled with the $20,000,000 that she had, it is easy to see how such a home was created. Sarah Winchester died on September 5, 1922 and she loaned most of her belongings over to her niece as well as her personal secretary. Sarah’s niece took what belongings she wanted and shipped the rest off to be sold during an auction. Today, the home is owned by Winchester Investment LLC and is open to the public for tours.