Camp Croft, which is located near Spartanburg in South Carolina, was an Army Infantry Replacement Center during World War II. The camp was operational from 1940-1946 and has since been classified as a Defense Environmental Restoration Program or Formerly Used Defense Sits. Camp Croft was established by the War Department on November 8, 1940, to be a year-round training center because the terrain and mild climate were ideal for continuous training. The camp was located five miles southeast of Spartanburg and was well received by the local community. Once trainees left Camp Croft, they went on to fight in battles around the world. After the war, the camp’s land was sold as parcels to local organizations and businesses and the remaining acreage was transferred to the South Carolina Commission of Forestry to create the Croft State Park. 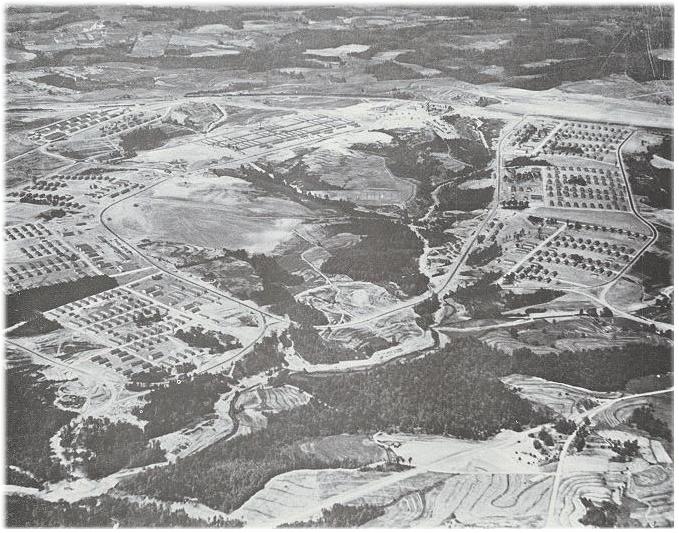 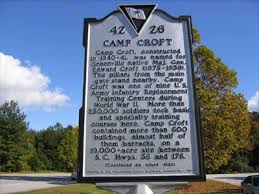 In the fall of 1939, the army personnel only numbered around 200,000 men and the army planned to house and train millions of troops at camps across the United States.1 President Roosevelt signed legislation to enact the first peace-time draft in American history, which meant that new training facilities were needed to train these new soldiers.2 On November 8, 1940, the War Department authorized the construction of Camp Croft, one of the new training centers, near Spartanburg, SC. The local community was supportive of Camp Wadsworth, which had operated during World War I, and were enthusiastic about the construction of Camp Croft.3 The camp was named after Major General Edward Croft, who was a South Carolina native and retired as the US Army Chief of Infantry following WWI. Prior to the construction of the camp, around 263 local families had to be relocated and several families were moved to pre-fabricated houses at the nearby West Farm.4  The construction of the camp was the largest building project in local history and cost around $10.3 to complete.

Camp Croft was comprised of two areas: cantonment area and training, firing, and impact range areas. Approximately 18,000 to 20,000 trainees were housed in the cantonment area.5 The camp also included post headquarters, post office, post exchange, service clubs, movie theaters, chapel, hospital, dental clinics, a red cross center, and other headquarters.6 In June 1941, the first graduates of the training program- the 33rd Training Battalion- completed the 13 week course and were assigned to the 28th Division in Pennsylvania.7 Most of the approximately 70,000 trainees who trained at Camp Croft were drafted through the Selective Service and were sent to the training center after signing in at induction centers around the country.8 Training courses at Camp Croft initially lasted 13 weeks; however, the training was cut to 8 weeks following Pearl Harbor. The trainees at the camp had no choice in what units they were assigned to and were assigned to units as “loss replacement” if the troops were lost.9

Camp Croft had numerous training ranges and areas which were designed to mimic the landscape and conditions of the battlefields which the trainees would be sent to. All trainees learned basic infantry skills and some specialized in rifle, cannon, heavy weaponry, tank, headquarters, and service company.10 The firing ranges at the camp consisted of pistol, rifle, machine gun, mortar, antiaircraft, and tank ranges. The camp also trained soldiers on how to use a variety of weaponry including: hand grenades, rifles, pistols, bazookas, and antitank guns. The camp also provided gas chamber and obstacle courses. 11

Camp Croft quickly changed in the years following the war. Immediately after the war, the camp served as as a separation point for soldiers who were about to be discharged.12 In 1947, the camp was declared to be surplus and was parceled off into lots before being sold to local organizations and businesses. Nearly 7,000 acres of land from the camp has been designated as the Croft State Park by the South Carolina Commission of Forestry.

Camp Croft, which has been renamed Croft State Park, is located at • 34.8816692, -81.8702833. The site can be accessed through interstates 85 and 26. Once visitors exit onto Highway 56, they can turn onto Hwy 56 and take that to Dairy Ridge Road. Signs are posted along Dairy Ridge Road which will help visitors access the park.13 The park has numerous trails, lakes, and campsites which allow visitors to better explore the area.