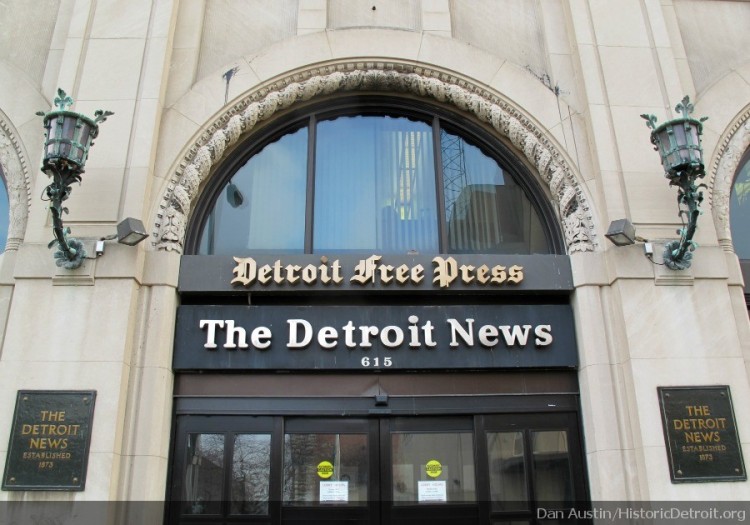 Construction of the Detroit News Building (image from University of Michigan) 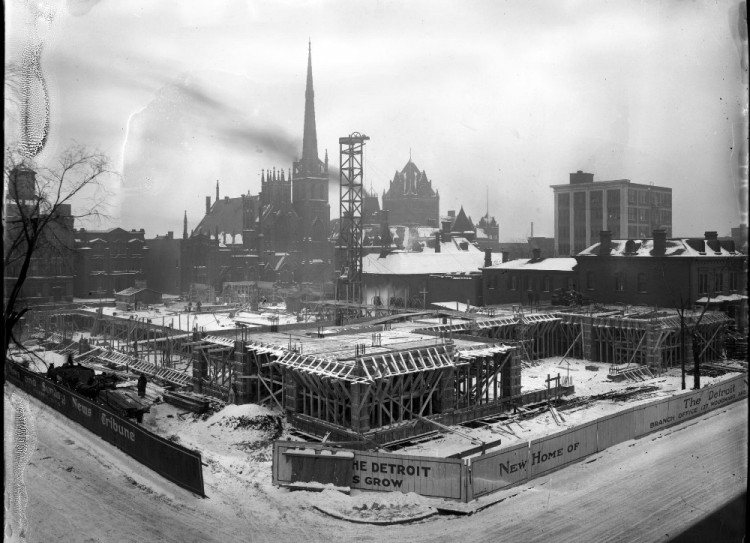 Soon after opening (image from the University of Michigan Art, Architecture, and Engineering Library) 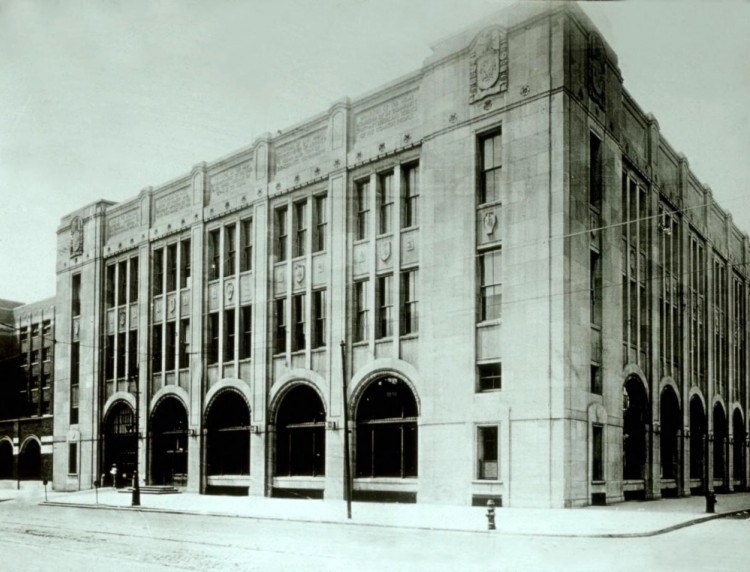 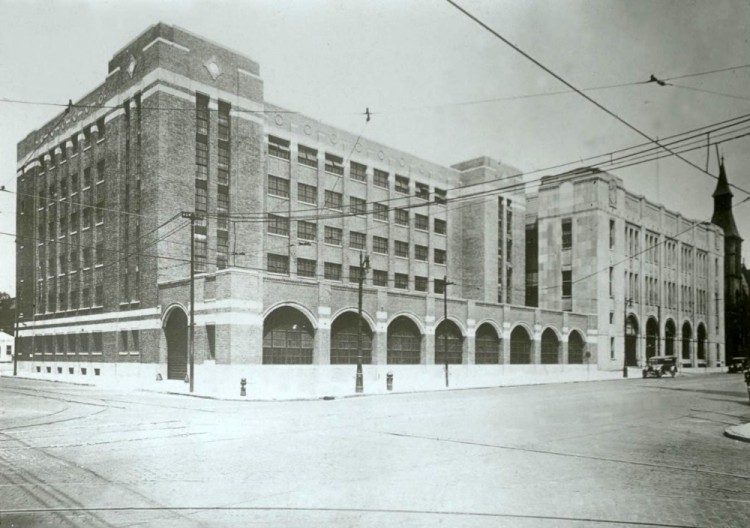 The lobby circa 1940 (image from Wayne State University) 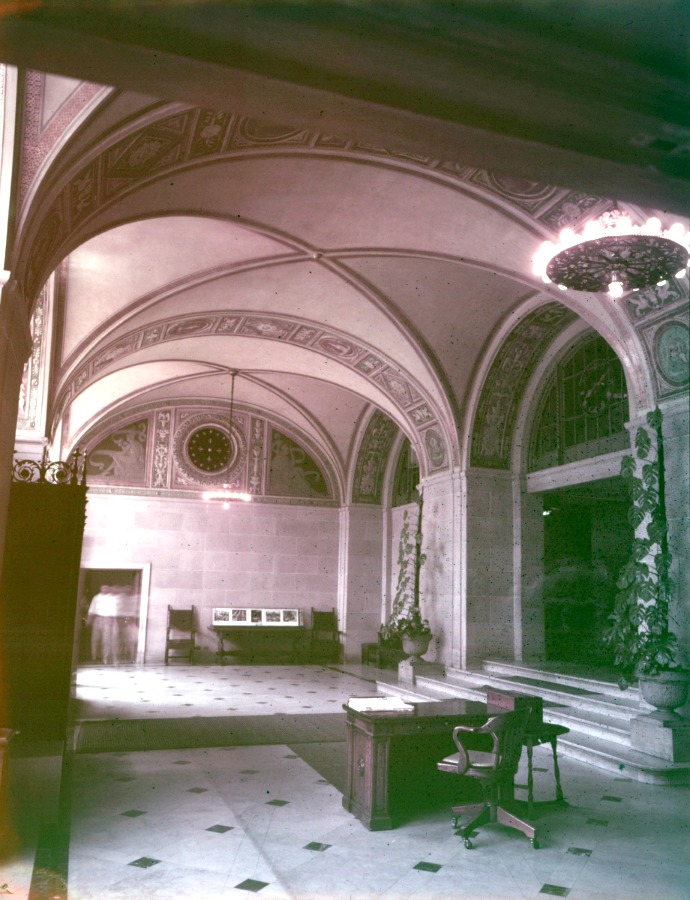 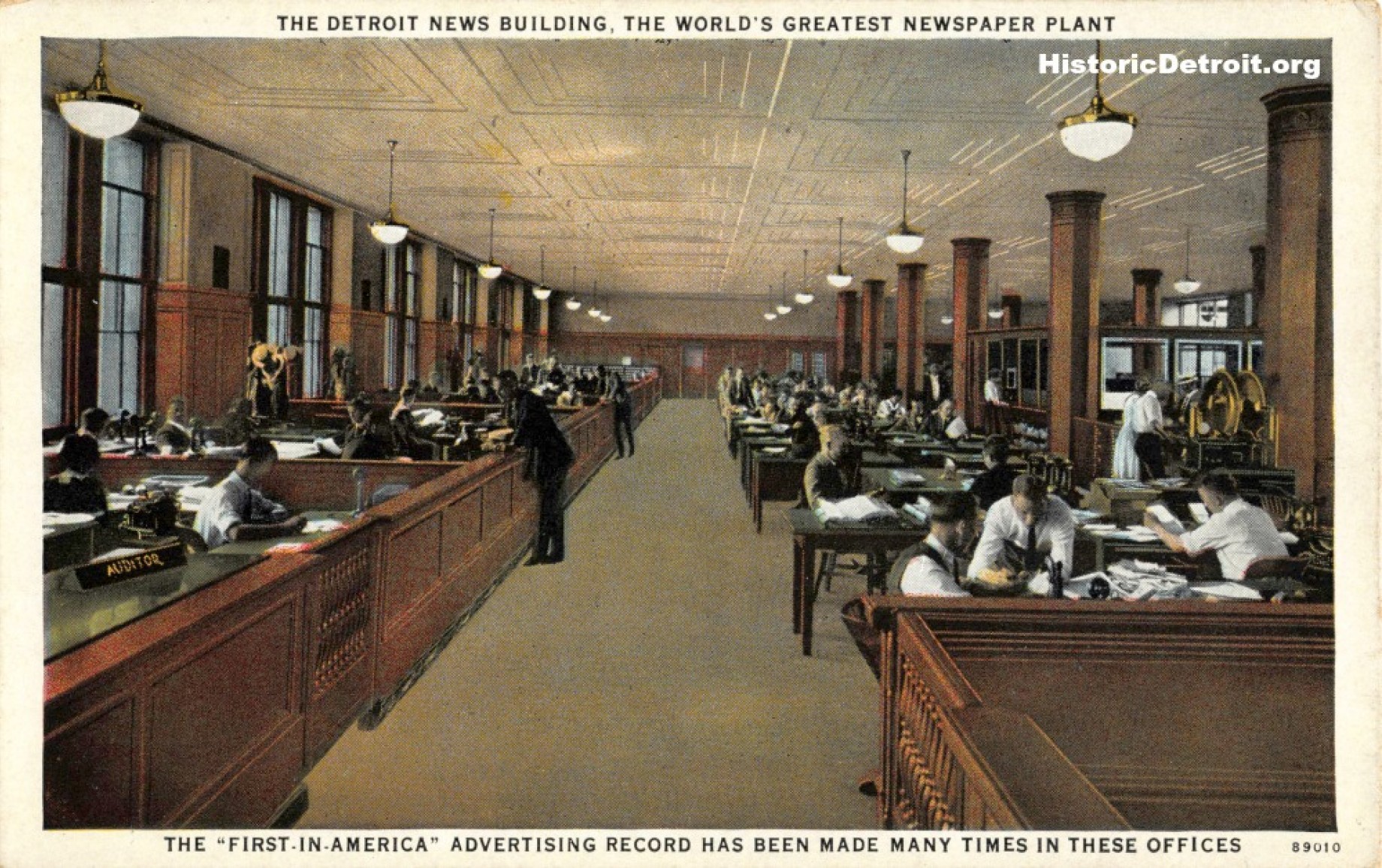 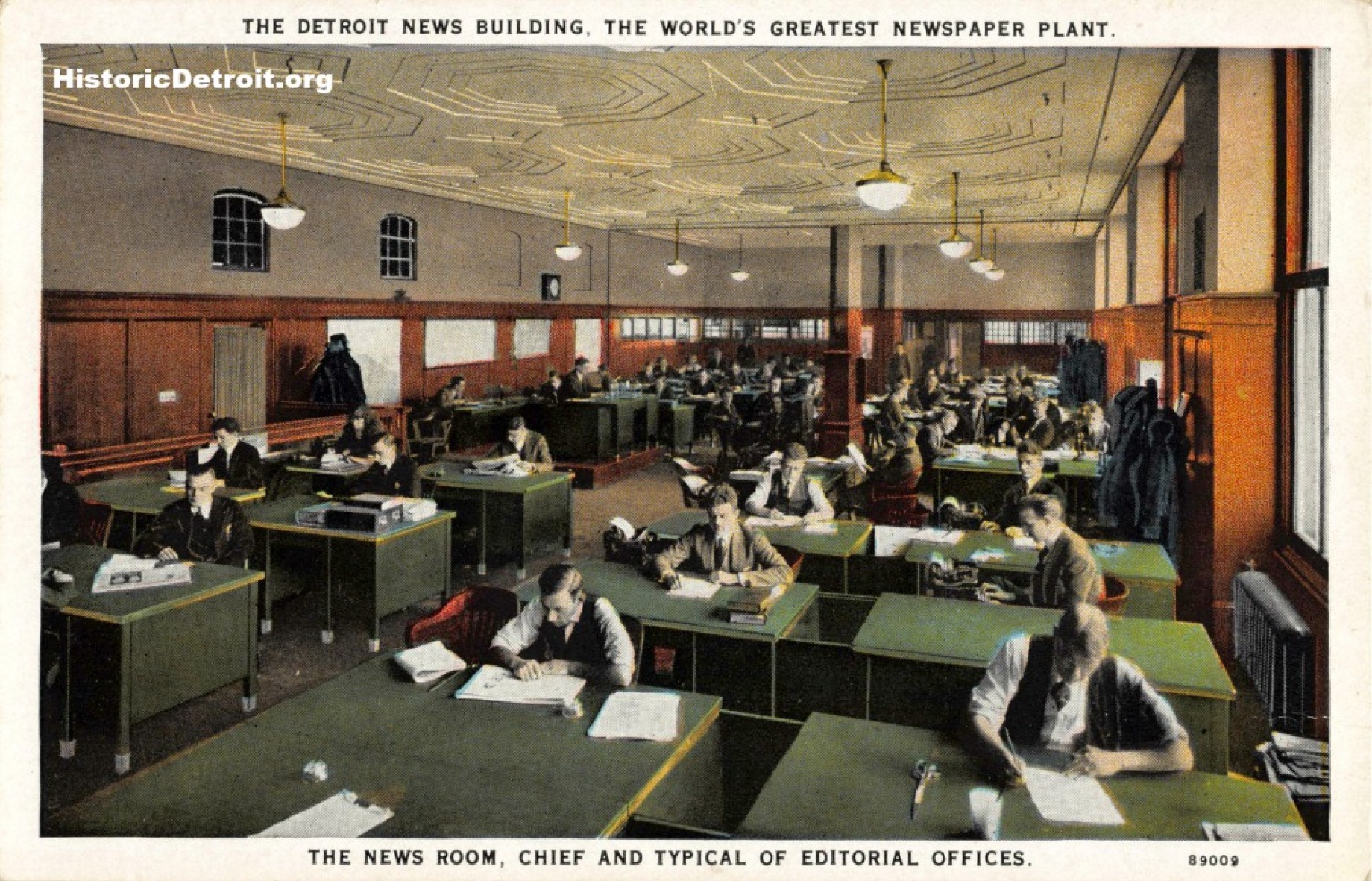 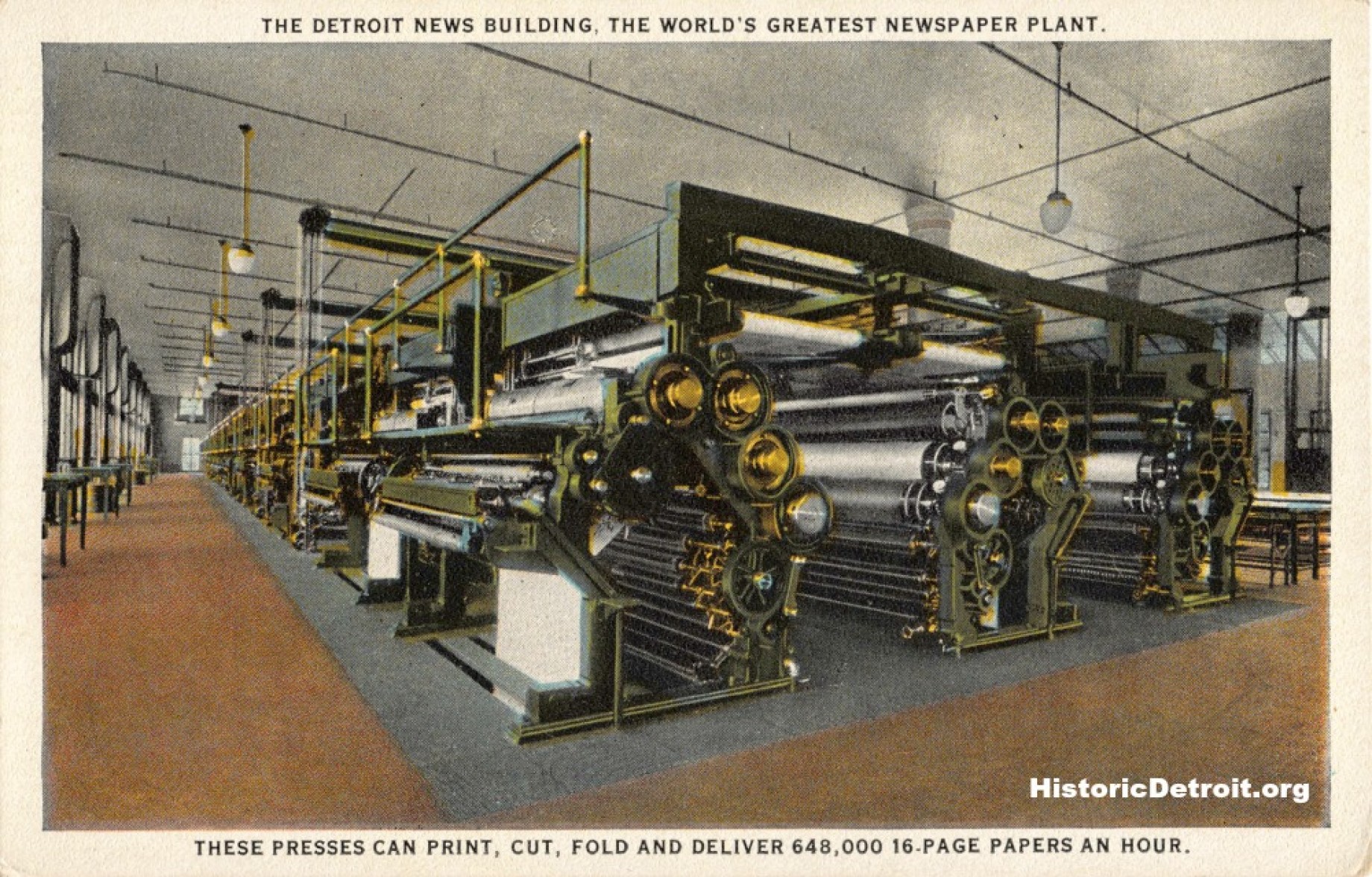 Two Rival Papers and the Home They Shared

On May 5, 1831, before Michigan was even a state, the Democratic Free Press and Michigan Intelligencer (later known as the Detroit Free Press) published its first issue. Owned by Sheldon McKnight, the Free Press pushed for statehood and the formation of the Associated Press [3; 5]. It became the first daily paper in the Detroit area in 1835, and in 1853 (under new owner Wilbur F. Storey) became the first American newspaper to publish a regular Sunday edition. Storey was also responsible for publishing telegraphed national news stories in addition to local news, as well as sending war correspondents to Civil War battlefields. Thanks to these efforts, the Free Press was the first American newspaper published in Europe [3]. Still in operation today, the paper had received eight Pulitzer Prizes by 1998 [5; 6].

The Detroit News was first published as The Evening News on August 23, 1873. Owned by James E. Scripps, a newspaper tycoon, the Evening News emphasized local interest stories, pushed for political and business reforms, and was an immediate success [2]. In 1916, the paper  hired architect Albert Kahn to design a large, modern building for the News. Kahn's Indiana limestone building features a façade lined with inscriptions (below) and statues (of Johannes Gutenberg, inventor of movable type; William Caxton, who brought the printing press to England; Christophe Plantin, a Renaissance printer; and Benjamin Franklin, founder of the Pennsylvania Gazette and printer of Poor Richard's Almanack) [2; 3]. The presses were housed in the basement, a tennis court on the rooftop, and a library on the fourth floor. The building also featured murals, a fireplace, oak woodwork, and leaded glass windows. The Detroit News moved into the massive building on October 15, 1917 and began expansion the very next year; the building and its addition now cover 404,000 square feet [2; 3]. By the 1970s, the newspaper boasted three Pulitzer Prizes and the largest evening circulation in America [6].

Competition between Detroit newspapers (especially the Free Press and Detroit News) was fierce. One example given in a 2015 Detroit News article: a Soviet sailor who abandoned ship in Detroit was hidden by journalists of the Free Press at a hotel, who hoped for a good article out of the deal. Detroit News reporters pretended to be immigration officers in order to steal the sailor and the story [3]. By the 1980s, the Free Press and the Detroit News were essentially the last major papers standing in the city of Detroit, and in 1988 agreed to a joint operation with separate newsrooms but shared expenses [2; 3]. Ten years later, the Free Press moved from 321 West Lafayette (where it had operated for around 75 years) to the Detroit News Building [2]. The size of the building makes utilities and maintenance expensive, however, and in 2014 the employees of both newspapers relocated to the Federal Reserve Building [3]. The Detroit News Building was sold to Dan Gilbert's Bedrock Real Estate Services [2]. Part of the building is now occupied by Molina Healthcare, one of Michigan's largest Medicaid HMOs; the rest is still under renovation [1].

Michigan Registered Historic Site / The Detroit Free Press / Older than the state of Michigan, the Detroit Free Press began publishing as the Democratic Free Press and Michigan Intelligencer May 5, 1831. The Free Press supported the drive for statehood, helped establish the Associated Press and sent reporters to Civil War battlefields. By the time the paper moved in July 1998 to this Albert Kahn-designed building, the Free Press staff had earned eight Pulitzer Prizes. / Erected 2000 by Michigan Historical Center, Michigan Department of State. (Marker Number S665.) [5]

The Detroit News / On August 23, 1873 James E. Scripps began publishing The Evening News, one of the first popular, low-priced evening newspapers in Michigan. The News specialized in short, local, human interest stories. Resolutely independent, it has continuously championed political and business reform. In 1917 the enterprise moved to this building designed by Albert Kahn. By its centenary, The Detroit News had attained the largest evening circulation in America. / Erected 1976 by Michigan History Division, Department of State. (Marker Number S450.) [7]

Mirror of the public mind. Interpreter of the public intent - troubler of the public conscience. Reflector of every human interest - friend of every righteous cause - encourager of every generous act. Bearer of intelligence - dispeller of ignorance and prejudice - A light shining into all dark places. Promoter of civic welfare and civic pride - Bond of civic unity - Protector of civil rights. Scourge of evil doers. Exposer of secret iniquities - Unrelenting foe of privilege and corruption [2].