The Nashville Arcade was constructed from 1902-1903 in what was then Overton Alley by businessman Daniel C. Buntin, who was inspired by the Italian Galleria Vittoria Emanuele II Arcade in Milan. The Arcade, which is on the National Register of Historic Places, was designed by local firm Thompson, Gibel, and Asmus. In addition to its architectural significance and centrality to the history of downtown Nashville, the Arcade is also significant for its connection to the Nashville sit-ins and the history of civil rights. The Arcade was the meeting place for university students who protested nearby segregated establishments on February 13, 1960. Today, the Arcade is still home to many retail shops, as well as restaurants, offices, and art galleries. Two organizations of artists and supporters of art are based here: Art at the Arcade and The Coop. The Arcade also participates in Nashville's First Saturday Art Crawl.

The Nashville Arcade (image from Wikimedia) 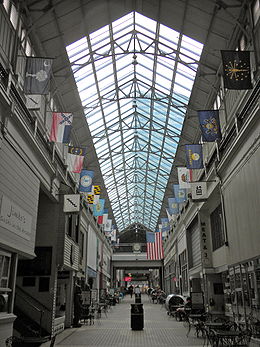 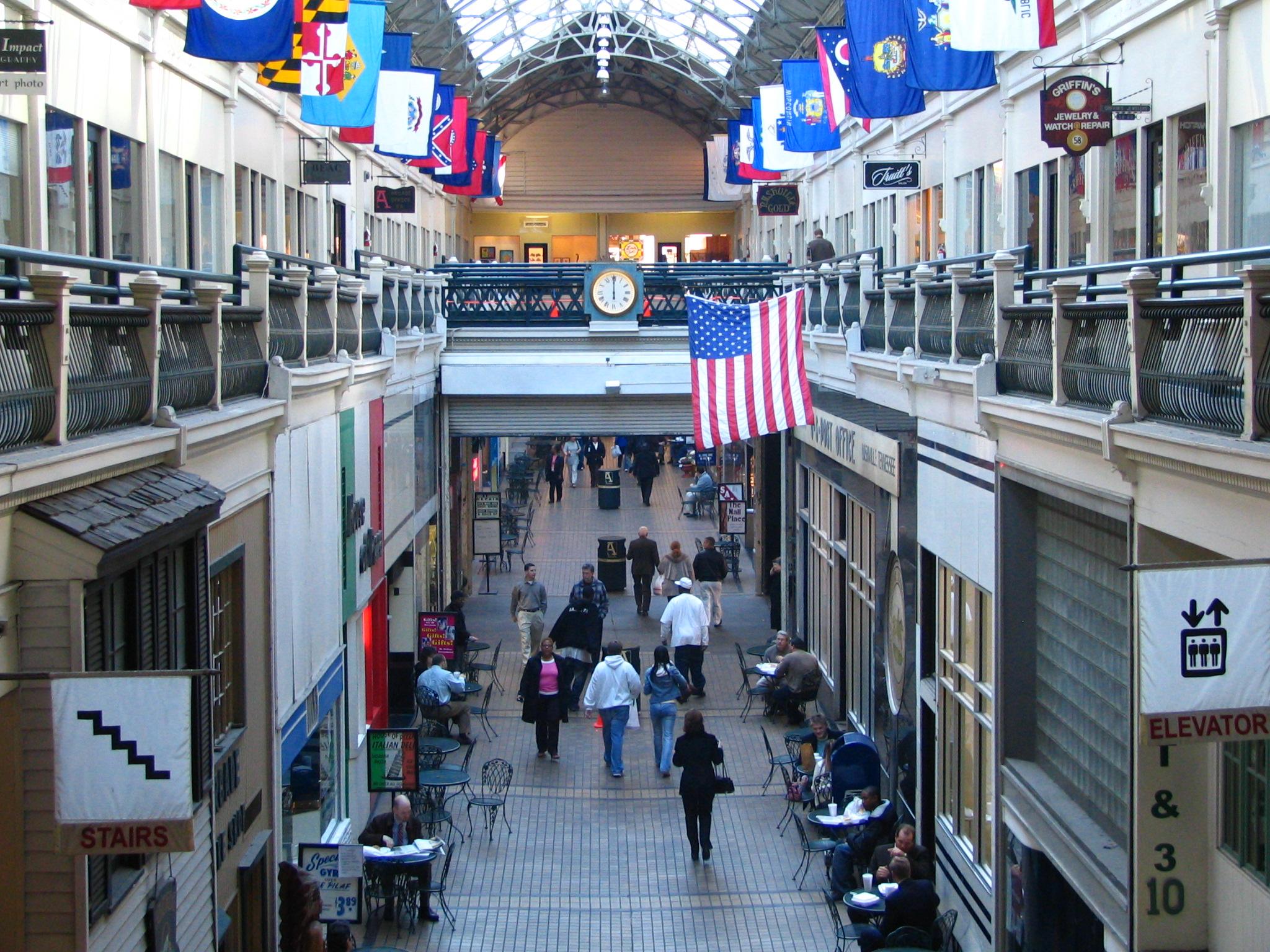 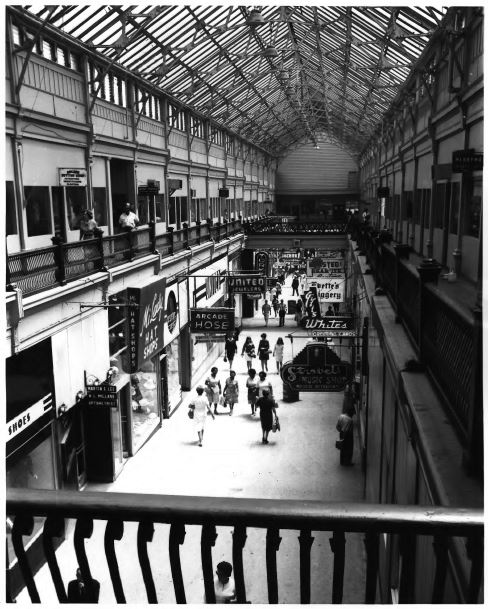 Exterior in 1972 (image from the National Register of Historic Places) 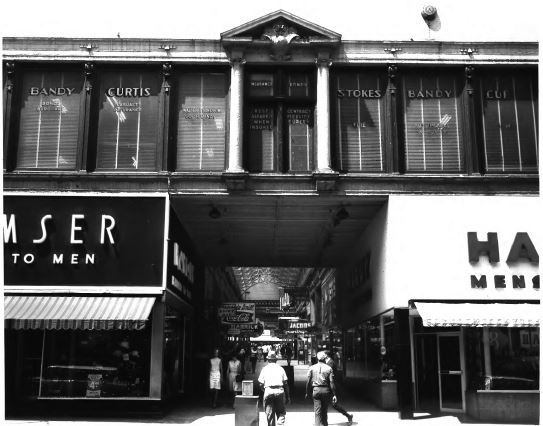 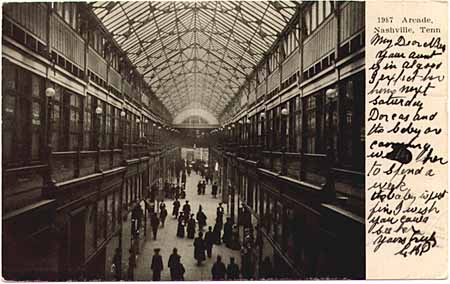 History and Art at the Arcade

Daniel Carter Buntin returned from a trip to Italy inspired by the Galleria Arcade in Milan and began a corporation to build Nashville's first covered shopping center in a similar style in 1902. Constructed in what was then known as Overton Alley between 4th and 5th Avenues, the two-story, open-ended Arcade was designed by Nashville architectural firm Thompson, Gibel, and Asmus. It was built in less than a year by Edgefield and Nashville Construction Company. The steel bracing for the gabled glass roof was installed by the Nashville Bridge Company. The second floor features a wrap-around balcony with decorative iron grillwork.

When the Greek Revival style building held its grand opening in 1903, over 40,000 people attended (roughly one-third of the county's population at the time. Captain T. M. Steger served as the Arcade's first President, and some of the original shops included The Ocean, Patterson's Novelty Shop, Blue Seal Bakery, and Bland's Fruit Stand. The Walgreens drugstore at the Arcade was part of the 1960 Nashville Civil Rights sit-in protest. It has been listed on the National Register of Historic Places since 1972.

On February 10, 1960, after hearing about the sit-in protests in Greensboro, North Carolina, James Morris Lawson Jr., a church minister, and the Nashville Christian Leadership Council (NCLC) met to figure out what they could do in Nashville, Tennessee. Seventy-five to one hundred students gathered that evening in Fisk University’s auditorium where Lawson announced that the sit-in protests were going to begin in Nashville.

On February 12, 1960, hundreds of students showed up at Smith’s church FCBC to prepare for the protests the following day. They formulated the plan to send the student protesters in waves in order to replace the protesters that would be arrested and to enable them to be trained while waiting at the FCBC.

On February 13, 1960, Black Nashville students from nearby Black colleges began their full-scale sit-ins. They all met at the Arcade on Fifth Avenue then split up to go protest nearby segregated establishments. These establishments included S.H. Kress Department Store, Woolworth’s on Fifth, McClellan’s and Walgreens.

Lawson said, “It went very well. The police were orderly, the managers kept people from congregating without shopping, and the police did the same thing. There were plainclothes detectives, so for those two weeks the demonstrations went on with complete smoothness, well organized and without a hitch. We had observers in the streets. Will Campbell [a white civil rights activist} had put together a number of while observers to be present every time we sat in, in case we needed witnesses, so we had that organized. Others of us walked from place to place and kept our eyes on things.“

Throughout the following months, many sit-in protests occurred and the protests attracted more backlash and violence as time went on. The Arcade was the site of desegregation demonstrations after the sit-ins occurred.

Today, the Arcade can house up to fifty tenants, thanks to the purchase of surrounding properties for expansion. The first floor contains primarily retail and restaurants, with shops, offices, and a number of art galleries on the second floor. Art at the Arcade is an organization of some of the resident artists, gallery owners, and shops who are working toward the creation of an art district in downtown Nashville. The Arcade is also home to a curational organization, The Coop, which is a group of artists, curators, and professors working to present underrepresented, new, and challenging artists to the community. In addition, the Arcade participates in Nashville's free monthly First Saturday Art Crawl from 6 pm - 9 pm. More than twenty downtown galleries participate.