The Texas Panhandle is unique for many of its natural resources, including an abundance of helium gas. A plant located near this marker produced nearly all of the helium in the world from 1929 to 1943. Control over this important natural resource was critical during America's fight in World War II, as helium is used in numerous defense-related scientific fields from nuclear energy to producing lighter-than-air aerial craft. This plant in Amarillo was operated by the Bureau of Mines and operated from 1929 to 1970.

This marker is on the SE corner of W. Amarillo Blvd and Helium Road 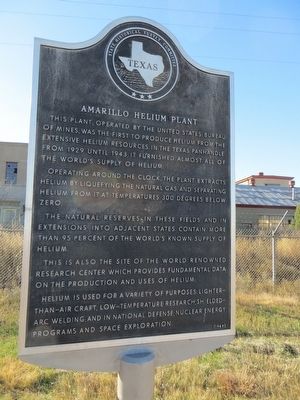 During World War I, the US military became interested in helium's potential to create lighter-than-air craft without using flammable gasses such as hydrogen. The tragic explosion of the army's airship Roma in 1922, and the resulting death of thirty-four people, led to increased research to find uses for helium. At the same time, the leading helium-producing facility in the 1920s that had been located west of Fort Worth had depleted existing helium resources. The discovery of extensive helium in this area and the construction of this plant, which began in 1928, proved critical to the U.S. Army's discovery of numerous military adaptations of helium.

For a period in the 1930s, this was the site of the only factory that produced helium in the world. Over ninety percent of the world's known supply of helium gas is located in this region of the Texas Panhandle. Commercial firms also came to value the potential of helium in processes related to welding. By the mid-1930s, helium was in high demand by both the military and many industrial firms.