The Romanesque Revival style Utopia Hotel was designed by Hugh Cathcart Thompson (architect of the Ryman Auditorium) and opened in 1891. It stands between Fourth Street and Nashville's historic Printers Alley, in what was then the Men's District—an area dominated by bars, gambling dens, and brothels in the nineteenth century. The uniquely narrow hotel stands six stories tall and held 60 guest rooms; today, developers are working with the city of Nashville to renovate and reopen the long-abandoned upper floors of the Utopia as a boutique hotel. 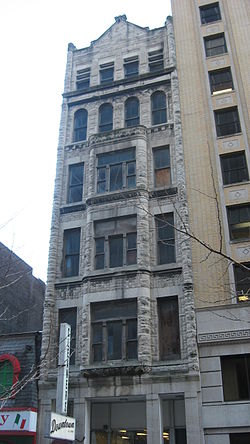 Interior of the upper floors 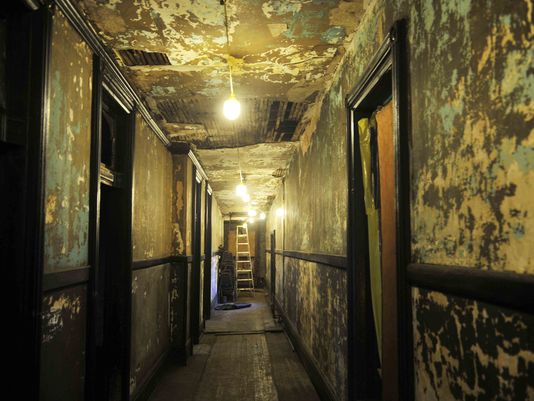 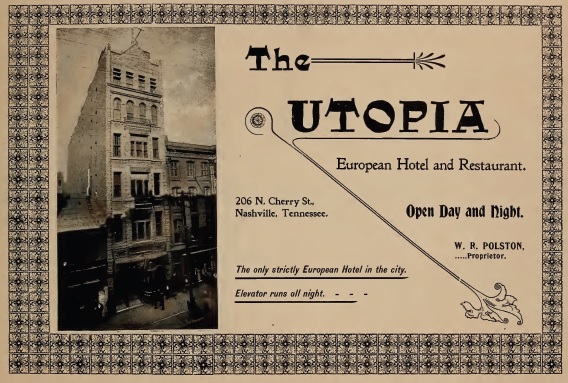 The Romanesque Revival style Utopia Hotel was designed by Hugh Cathcart Thompson (architect of the Ryman Auditorium) and opened in 189. It stands between Fourth Street and Nashville's historic Printers Alley, in what was then the Men's District—an area dominated by bars, gambling dens, and brothels in the nineteenth century. The uniquely narrow hotel, with its stone façade, stands six stories tall and held 60 guest rooms, with a basement below opening onto Printers Alley.

When the Utopia opened, Nashville was one of the South's cultural, economic, and entertainment hubs, and not only did the hotel accommodate guests, but also offered a restaurant, saloon, and tobacco shop. Ike Johnson was the Utopia's first manager, but the economic Panic of 1893 led to the hotel's closing; Johnson opened the renowned Southern Turf Saloon nearby soon afterward, while the Utopia reopened under the management of William R. Polston, who, in addition to running a successful hotel, also initiated a bread line and hosted a Christmas dinner for Nashville's poor.

The Utopia was particularly popular during the racing season when gamblers and jockeys alike frequently partook of the hotel's dining room fare. When a new dining room opened at the Utopia in 1904, the hotel held a banquet for the Nashville Press Club and was rewarded with excellent publicity. Among the Utopia's prominent guests were U.S. Presidents Theodore Roosevelt and Rutherford B. Hayes.

Manager Polston died in 1911, and the Utopia was renamed the Bismarck Hotel and Café until 1920, when it reverted to its original name. Unfortunately, the business failed to weather the Great Depression, closing permanently in 1935. Only the first floor and basement have been used since, by businesses including a dry cleaning service, a restaurant, a barbershop, a strip club, and an office. Though the building has been listed on the National Register of Historic Places since 1978, the 80 years of abandonment of the upper floors led to deterioration, and the Utopia was listed on Historic Nashville's nine most endangered historic properties in 2012. The development of other historic properties along Printers Alley into boutique hotels has sparked interest in the restoration of the Utopia, and investigation of the upper floors in 2014 revealed intact pocket doors and light fixtures, original trim and molding, and rare Tennessee pink marble elements. In 2016, Nashville's Historical Commission and Historic Nashville approved plans for the Utopia to be restored and reopened as a hotel with entertainment venues on the lower floors—a modern-day return to its original use. However, as of January 2021, there does not seem to have been much progress toward this goal.